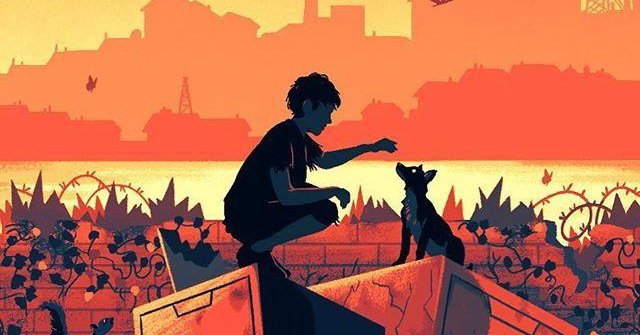 This is a story of trust and mistrust, of one boy against a world of light and dark in various forms. The boy, Landfill ‘as in precious,’ lives in the remains of an old coke works, which he and Babagoo call Hinterland. In this twisted version of Eden, Babagoo makes the rules, and Landfill follows them, as if it were a dictatorship for the smallest society in existence.

Where Babagoo is the government, Landfill is the people; where Babagoo is Big Brother, Landfill is the entirety of all that is brainwashed. In terms of characters, the animals being named after inspirational authors both show Simpson’s taste (it cannot be denied), and could maybe represent Babagoo finding his own irony in treating the world he grew up in as if even their greatest minds are only worthy of being remembered through his pets. Longwhite is, through the book, a fair depiction of the snake from Eden, seemingly feeding Landfill temptations against the will of the God-like power of Babagoo. And Dawn is the factor that isn’t supposed to exist and yet pushes through anyway; she is Landfill’s first true example of what the Outsiders are truly like, and is most certainly a catalyst for Landfill’s deception of Babagoo.

It isn’t quite so simple as good versus evil. Babagoo might be crazy, but it can be argued that you can be the craziest in all the land, and still know love and give it with full passion, even if the manner in which you show it is gravely twisted. There are times when you can hate Babagoo for his deceitful nature, and for the way he brought Landfill up to know a world that doesn’t exist, and yet this can be washed away, despite our own assurance of his evil, when they laugh together, take care of each other, give each other concern when it matters. In the end, Babagoo may be crazy, but you have to wonder what drove him to that point.

Maybe the Outsiders really are as corrupt as he made them out to be, we’re not really told, but over time his perspective on that life has darkened and twisted, and all metaphorical images of corruption suddenly became literal, or close to it (when all is said and done, it is the money that made the Hunger, and money that the Outsiders definitely craved, and in our own world, it is surely money that makes everything just that bit more complicated). In the end, all decisions they make are for each other, and there is always beauty in that, regardless of the circumstances.

Scavengers is an enlightening show of how what you are told influences your perspective, as well as your freedom in what you do, and choose to avoid. Where in our world, our freedom is found in comfort and safety – a firm knowledge that not everybody is the enemy – in the world living in this book, this one form of life in Hinterland allows in its own way a freedom of movement and mannerisms which we perhaps cannot understand due to our own sense of dignity and embarrassment; Landfill has the freedom to drop onto all fours and run with the wildlife, while we get the freedom of understanding our own world as much as possible, of satisfying our questions instead of more and more building up and up until it pushes you right over that wall.

Overall, Scavengers is a truly gripping book, which doesn’t hesitate to bring out key ideas and theories out in ways that are original and thrilling to witness. If you want to be shown something familiar which only has the purpose of deceiving you at every corner, then it is my opinion that this book is perfect for you.