Young Ambassador Book Reviews: Emma on Things A Bright Girl Can Do by Sally Nicholls 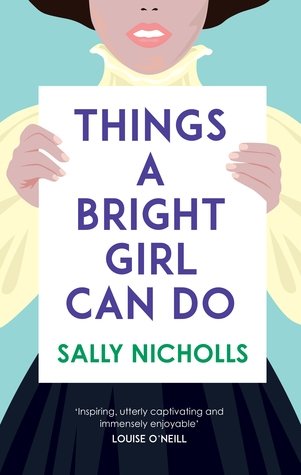 For people who are interested in the suffragette movement and how it may have impacted different people from varying backgrounds, as well as how it may have linked in with the different opinions and efforts made throughout WWI by women – suffragists and suffragettes – as well as men. I think this book is perfect for teen and upward, because it can help gain knowledge on women’s suffrage that isn’t really taught, find new questions to deliberate on into the future, and all the while follow the journeys of characters in a way that makes each event within the story suddenly closer to home. I believe it is especially important for young people to read a book like this because the suffrage movement shouldn’t be seen as something that just happened, but as something that is having repercussions in our lives right now, and this book does this outstandingly.

What you might probably expect from this book is that the opinions for and against women’s suffrage may have been shown as rather black and white (i.e. This is right, therefore we should do this; this is wrong, therefore we shouldn’t do this), but to my delight, it is instead very honest about the problems even the women themselves faced as to how far they were willing to go, considering the impact they were making on family and friends. While it shows no doubt that the fight for a right to vote was a positive thing, it also shows that different morals and loyalties influenced their methods of fighting, and it’s intriguing to see just how much these ideas may have consumed society.

There aren’t so many historical novels that acknowledge same-sex relationships even existing at those times, and it’s crazy to think how problems caused by a homophobic society would have linked in with the already huge array of difficulties that were already being faced in, for example, WWI. At the same time, it’s even harder to think that they did, and that same-sex oriented people had to face and fight through so much; it’s almost unimaginable! ‘Things A Bright Girl Can Do’ goes out of its way to bring to light the difficulties in searching for your own identity, in a time when so many morals and duties and opinions are already being thrown your way faster than anybody could possibly take.

So… I recommend this book for any lovers of historical fiction, such as ‘The Book Thief,’ or anyone who enjoys reading and discovering political arguments and perspectives; this book is a great way to go.

Heart-warmingly, this story demonstrates a passion for our rights and beliefs that we shouldn’t ever abandon, and you can’t help but feel proud; Nicholls really helps to make stories of long-gone war resonate with us despite time gone by. Delightful in its thoughtfulness, and emotionally compelling in its storytelling, you couldn’t ever regret it.