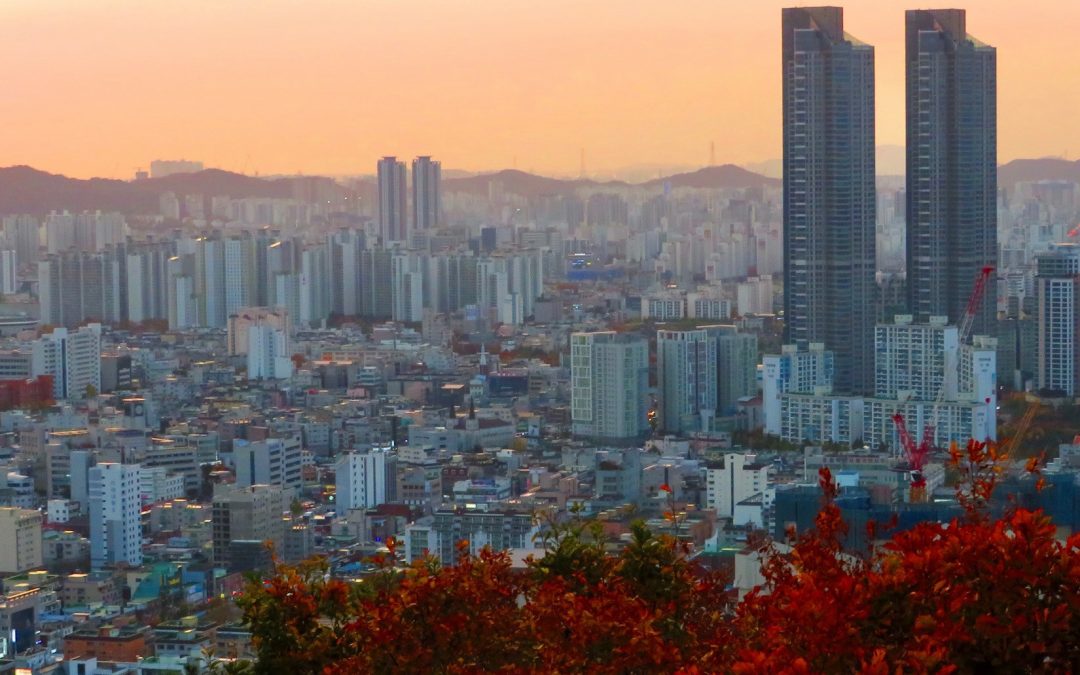 ‘Bucheon is not beautiful – well, not like Nottingham.’ That was Seoyoung, of Bucheon UNESCO City of Literature, when my Zoom interview for this residency came to a close back in May. I laughed – it was hard not to. Besides, being interviewed by Seoyoung and her colleague Sunmin had been joyous, not the kind of interrogation I’d expected. Souyoung is a proud advocate for Bucheon. But she had visited Nottingham and Norwich the previous year, I learned, and apparently had seen in my home city something I’d – let’s say – taken for granted. I adore Nottingham, and it is a lot of things, but beautiful had not been the first adjective that sprung to this mind.

Dear reader: Nottingham is a handsome city. I write this in a café in Bucheon’s Central Park, a large rectangle of sports pitches, ponds, monuments and impressively bosky avenues. Around the edge, on a green track, diligently masked locals, some in little groups, take their daily exercise at different speeds, and look like they’re competing in an endurance race with rules I can’t fathom. But then my eye lifts to a view that is not, by any usual conception, charming. Concrete apartment blocks rise in all directions, each bearing its identifying number in huge black numerals. Some of these buildings are at least forty floors high, but comparisons to the corner where that other Central Park meets Fifth and Fifty-Ninth would not be fair. Likewise, comparisons to where Slab Square meets Long Row and King Street. In front of the park, and given prominence by a boulevard through it, is Bucheon City Hall, which has a similar symbolic significance in this city to the Council House in ours. Let’s just say that it doesn’t have a dome.

But this is a beautiful place, its beauty most evident either at close range or distance. And it is jammed with resources – and literary reminders. A street in the south of the city is lined with murals and sculptures depicting the life of Pearl S. Buck, the first American woman to win the Nobel Prize for Literature, who looked after local orphans after the Korean War, and whose novel The Living Reed depicts life in Korea before and during the Second World War. Another street is full of sculptures and statues portraying characters in Yang Gwi-ja’s superb novella A Distant and Beautiful Place, which is set in the city. Several of Korea’s most prominent poets have lived here too, such as Byeon Yeong-ro, Mok Il-sin and Jeong Yi-jong, all of whom are commemorated with plaques bearing verse, statues, parks. Tomorrow, I will meet with the poetry translator Woo Hyeong-sook, and learn about even more of them.

The perspective is different, and I see no reason not to wallow in it. Indeed, I am here to wallow – a perfect condition for writing. Distance allows perspective.

To the east is the sprawling port city of Incheon, to the west is Seoul, and two subway lines connect us with every corner of both of them. The whole conurbation, one contiguous urban sea with islands of uninhabited higher ground floating in it, is home to about twenty-five million people. But Nottingham-sized Bucheon feels both together with and separate from its massive neighbours, packed tightly onto its own little plain surrounded by long, jagged hills. Yesterday afternoon, I climbed Wonmisan – the ridge dividing Bucheon from Seoul – for the second time. I will do so as many times as I can. A pagoda marks the summit and allows you to rise above the treetops, and on this occasion I decided to stay to watch night fall. The world’s fifth tallest building, a knife-tip fifteen miles away on the other side of Seoul, glinted in the low sunlight. Then, in the other direction, a fat orange sun sank over my temporary home city, which turned from grey to a wholly South Korean dazzle of sparkles and neon fuzz. Then I staggered back down to civilisation through the dark wood, smashing my knees and toes and muttering swears, but extraordinarily happy for all that. I know I am not living here: I am experiencing time out of time. The perspective is different, and I see no reason not to wallow in it. Indeed, I am here to wallow – a perfect condition for writing. Distance allows perspective.

The practical resources for this wallowing are almost unbelievable – even when you forget those in the rest of the megalopolis beyond Bucheon’s city limits. On my first full day here, I finally met Jeff Noh, a Korean-Canadian novelist who is the other lucky writer in residence. We have become friends, much to the delight of Sunmin and Seoyoung. Both of us had just got out of our fourteen-day quarantines, and had the blinking eyes of newly-released convicts as we were driven from one location to another on a charmingly disorientating orientation tour. First stop: the Wonmi Library. Jeff pointed out a child’s cartoon book of Animal Farm (it’s very popular here, apparently). Between the huge rows of packed shelving, lines of 3D printers, computers, scanners stood waiting for service, and fleets of people sat at separate desks, deep in thought. Everything sparkled. ‘This is our second biggest library’, said Sunmin. I thought of what has been done to our public services in the UK after 10 years of Tory cuts.

I hadn’t discovered the right new motivations to write, a way to open a new door. I have now, and that is because of Bucheon.

Then we went to see our office, in a huge complex that includes a comics museum over several floors. A few days later, we had an excitingly intense recorded conversation about writing and publishing in the time of COVID, with two prominent local publishers, Jang In-hyung of Toum Publishing and Lee Joo-yeon of the Milkwood Translation and Publishing Agency. This took place in Yong Books, which has a comparable community focus to Five Leaves, and holds a similar place in the hearts of the Bucheon literati. And the attitude of our wonderful hosts is extraordinary: they care passionately about literature, and about providing the best possible conditions for writing. Perhaps I’ve never felt more welcome anywhere – nor more productive. ‘I am the person who helps you’, said Sunmin, when I thanked her for one of a million things that deserved thanks. ‘We are so pleased to have you here’, said Seoyoung, as though I’d somehow done them a favour.

Before I came here, I’d hit a bit of a rut: my third collection was published in May, and that felt like a kind of personal closure. I hadn’t discovered the right new motivations to write, a way to open a new door. I have now, and that is because of Bucheon. No writer in residence could feel happier.