Writer-In-Residence in South Korea #5: From Coast to Coast 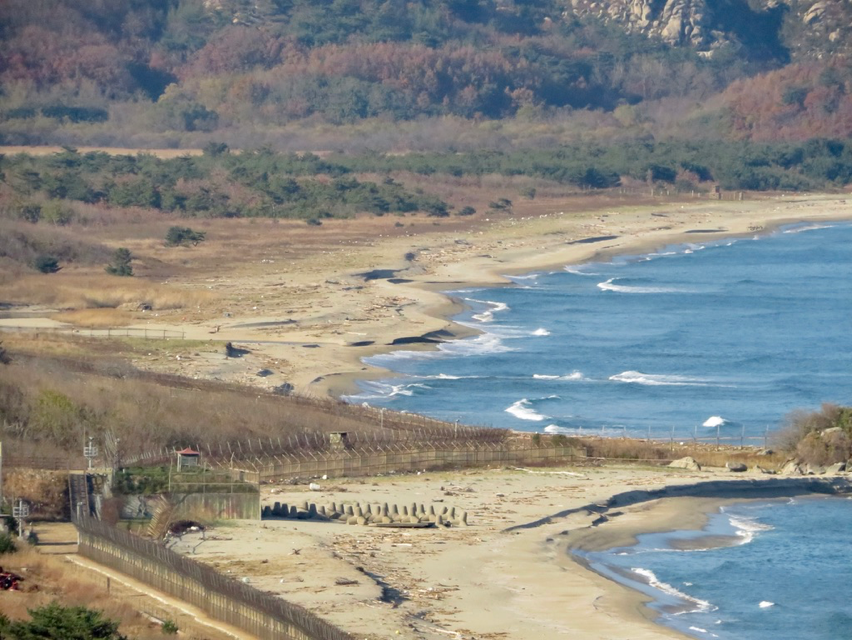 Let me tell you about my friend Jordan. We met at Leicester University, when he started a poetry society and I became its only enthusiastic member. Our ‘society’ descended into a vehicle for pranks when we decided to book the biggest hall at the university for an event headlined by a ‘poet’ who – please believe me – was as self-important as he was self-published, and marketed it as hard as we could until we’d sold about 50 tickets, with proceeds going to the NSPCC.

Then we sat in the control box with our friend Adam. ‘This poem is about the meaning of life’ our poet said by way of introduction (or something like that anyway), and then for the next hour the strobe lighting kicked in every now and then, the disco balls occasionally spun gaily, the reverb was cranked up to 10 on key words then slammed back down, the audio panned slowly and fully, the spotlight slid across the stage then resettled on its amusingly unflustered target. We played a thrash metal playlist during the interval, while serving wine and amuses-bouches.

It was a success on our terms, and we were being students. Nottingham is noted for its ‘rebel writers’ and while this hardly amounts to writing an epitaph for Lord Castlereagh in which passers-by are encouraged to urinate on his grave, or creating Arthur Seaton (‘Don’t let the bastards grind you down’), I’d like to think it counts at least as a tiny (immature, desperate) rebellion against abject pomposity.

After graduation, I was adventurous and went all the way up to Durham for an MA. Jordan popped over to East Asia for a year and never came back. He met his brilliant and hilarious wife Vivi in China, and now they live in Incheon, forty-five minutes or twenty subway stops from where I write this at my comfy little desk in Bucheon. She is a skilled calligrapher, and he teaches English Literature at a university. We lost contact a few years ago, before their move to Korea, and only re-established it by happy coincidence after I’d been awarded this residency.

This week, Jordan joined me on a trip to the north-east corner of South Korea, which culminates in what is effectively a sharp de facto peninsula, with the East Sea on one side, North Korea on the other, and the Goseong Unification Observatory near its tip, with an assortment of guard posts, electric barbed wire fences and mine fields in front of it. After 1945, this area was in North Korea for eight years, until the armistice that ended the Korean War left it in the South. There is no river here to divide the Koreas, and the final South Korean guard post stares point blank at a North Korean one, which has been tarted up with a DPRK flag and a Workers’ Party of Korea flag: the DPRK’s take on the hammer and sickle, augmented by the addition of a paintbrush to stand for intellectuals and artists. We could just about make out a soldier standing behind it.

To our side, facing North Korea and silhouetted against the sky on a bluff – evidently intended to be as visible as possible from a nation with no religious freedom – was a colossal Buddha and a Crucifix, in a show of plurality and tolerance. Of course, those across the border are fervently dissuaded from encountering or experiencing any of the final five nouns in that sentence. This must be one of the most beautiful places on earth that almost nobody visits for its scenery, though there were some South Korean soldiers and a few civilians looking out at the unreachable Korean mountains and rocky coves beyond. North Korea ‘could have the best hotels’ on its ‘great beaches’, Donald Trump told Kim Jong-Un in Singapore a couple of years ago, and perhaps this is one of the places he had in his greedy little mind.

imagine not ice cream and wafers, but black pudding mixed with glass noodles and boiled in a pig’s intestine…it is delicious

But we headed south to the nearby city of Sokcho, where a hundred concrete towers curl around a tight bay, opposite tiny Abai Island. Abai was inhabited by North Korean refugees from Hamgyeong province who fled south in little boats during the Korean War, and still apparently retains a North Korean flavour, but I can’t imagine a bustling road full of tourist restaurants and boutiques in Wonsan or Kaesong or Hamhung. The local culinary speciality is Abai sundae, a variant on Korean sundae.

For the latter, imagine not ice cream and wafers, but black pudding mixed with glass noodles and boiled in a pig’s intestine. For the former, imagine a squid filled with more squid, noodles and tofu and chopped into rings after it is boiled, then fried with a little bit of eggy pancake mix. I might not have this quite right. In any case, I doubt it bears much resemblance to what most people eat in Hamgyeong these days, and it is delicious.

Most people visit this part of the country for Soraksan National Park, which holds a comparable place in the hearts of South Koreans to that of the Lake District in the hearts of the English. Imagine jags of gneiss and granite piercing a tautened cloth of dense foliage that is occasionally dotted with temples. Nowhere could be more beautiful – or could it? From the top of one mountain, we could again see into North Korea, and just about make out a village by a bay that had been hidden from view the previous day. The land beyond the line where the Korean War stopped over sixty-seven years ago is of course full of places like this mountain range and that village, none of which have giant car parks beside them, and all of which are waiting to be explored – and possibly ruined by greedy developers.

Our visit was to a half-empty, covid-era park, of course, but the main routes through it are paved to accommodate the huge numbers of people just like us who want to play, and the hotels back in Sokcho service their – our – desires by turning the places we dream of visiting into the places we can visit with ease. North Korea has even more mountains than South Korea, half as many people, and Korea’s portion of Mount Baekdu, which straddles the border with China and is probably the peninsula’s most famous beauty spot, with a huge caldera lake sitting in its broad summit.

It rises from an empty valley, according to the evidence I have seen in a hundred tacitly poignant photographs on Korean walls, and is in a sense a Korean spiritual home. The North Koreans treat it as a spoil of war and a symbol of cultural inheritance: it is depicted on their Soviet-style National Emblem, directly below a radiant red star, and every year they celebrate the double lie that Kim Jong-il was born there on 16 February 1942.

Which reminds me. Before we left the region, we popped into a café, where Jordan went ‘to the toilet’ and in fact snuck off to tell some unwitting locals that my name is [insert word that is nobody’s name] and that it was my birthday – could they please come over to me and say ‘Happy birthday, […]’ in chorus? So they did, clapping enthusiastically all the while, and of course I thanked them profusely while Jordan videoed the joyous occasion. And I can’t even have him executed for his insolence, which is decidedly unfair.

All of this seems to have very little to do with writing, I realise; but I have been doing a lot of that too, with a new kind of freedom that I hope stays with me. If I could bestow one symbolic remnant of the DPRK on a future united Korea, it would be that paintbrush, for no artists or ‘intellectuals’ given permission to write (or paint) how they choose could not find nourishment here.