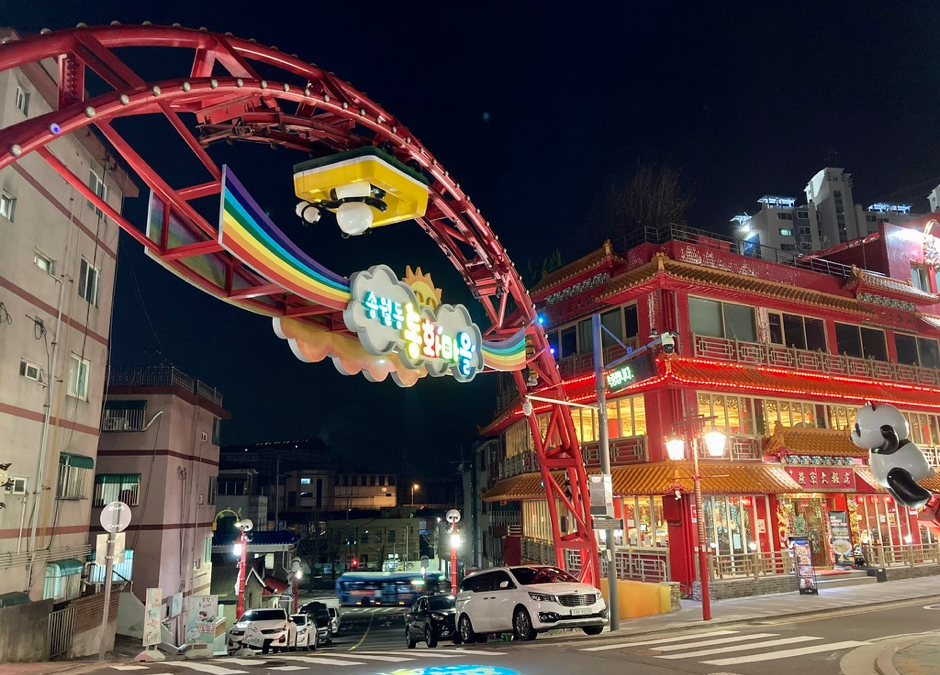 Flight KE 908 departs Seoul Incheon International Airport, firing north-east and turning away from the bulging North Korean shoreline ahead of it – an experience both almost unique to here, and completely normal. I look down at tufted tropical-looking islets in the shallow sea and, behind that, a squared-off, concreted shoreline lined with dockyards and covered in stacks of shipping containers, silos and other serious-looking bits of industrial whatever. Behind that, the near-uniform high-rises start to look like Lego.

It is all a fitting memorial to the importance of the Incheon Landings seventy years ago, which took place on the barely recognisable precursor to this shoreline, for without the success of that operation it is not improbable that everything beneath me would be in the DPRK and the only ‘chaebol’ in town would be the Dear Leader. I am leaving the end portion of a peninsula on the world’s biggest landmass, but in terms of human movement I am leaving an island nation that is also half a nation. It is an ‘island’ on which capitalism has run riot. I am not a fan of capitalism running riot, but I know where I’d rather be. Never pretend solutions are simple.

I have chosen to sit on the starboard side of the plane so that I might look out towards Seoul and Bucheon, and also might soon catch a few final peripheral glimpses of the half of Korea that remains a Hermit Kingdom. I’m not quite sure I can make out Bucheon, then think I have found the mast on top of Gyeyangsan and know it should be behind that, and then it is too late. I miss it already. I can then see the coast of North Korea. It looks shadowy and idyllic, though I know that North Korea’s ecology has been devastated in many places by rampant deforestation, most of which is the product of people turning to woodlands for food and firewood since the economic crises of the 1990s. Suddenly, I realise that I am humming ‘This land is your land, this land is my land’, as my unconscious makes an ironic joke.

If Korea is ever reunited, the people hidden down there will probably become second-class citizens immediately because they simply don’t have the knowledge to compete, even though their lives will in most cases dramatically improve. How will they take it? As Suki Kim puts it in Without You, There is No Us, which is about trying to teach English to the children of North Korea’s elite, ‘They were always comparing themselves to the outside world, which none of them had ever seen, and declaring themselves best. […] the words best and greatest were used so frequently that they gradually lost their meaning.’ And is this a moot point anyway? China, which is 177th out of 180 on the World Press Freedom Index kept by Reporters Without Borders (no prizes for guessing which country comes last; the UK is 35th and South Korea 42nd), keeps the DPRK on life support, and China isn’t exactly diminishing in power and influence. It will be interesting to see whether China again helps to save the DPRK, now the country’s fragile economy appears to be on the verge of collapse due to the pandemic

My last week passed in a blur, and was busy. Throughout the residency, I’ve had most of my time to myself, and just enough duties to make me feel as though I am plugged in. The balance has been perfect. This week wasn’t much different, really, but having done most of the things I wanted to do for my project, I decided to revisit some old haunts, make as much time as I could for the people I’d met, and edit edit edit.

On Monday, I gave a reading at Café Cally, which seems mainly to be a place for fountain pen enthusiasts: inked cats, people and mountains line the walls, as do fountain pens in fat little frames. The reading actually comprised me reciting two poems and discussing each at length with a couple of very impressive young writers called Lucia and Duke – then signing a few books (in disposable biro). I then wandered through a huge market, full of live octopi in trays, a million types of fruit and vegetables, and clothing shops, where I picked up some Menchester United (sic) socks and a pear the size of a child’s head. Tuesday involved a meeting with the Mayor of Bucheon, who presented my co-writer Jeff and I with commemorative plaques with our faces on them, which will definitely take pride of place on our desks back in Nottingham and Quebec, and then the two of us went to see Alex Lee, an agent who set up Milkwood Literary Agency. We stayed to be introduced to her book group, and then Alex suddenly asked me to give ‘a short lecture on English poetry’, which was endearingly vague.

According to Jeff, my eyes widened momentarily as I said ‘Of course!’, but I think I held it together and that they enjoyed hearing about Keith Douglas and extrospection (all translated by Alex), and how it related to their discussion. They were certainly attentive and inquisitive. I also recited one of his poems and Alex translated it in real time. Imagine that…

Wednesday took me back to Seoul for the penultimate time with my friend Jordan, to the Museum of Contemporary Korean History, which gives an occasionally partisan view of the Korean War and its aftermath (‘those who refused the choice they were given’ is a terrible way to describe those who remained above the 38th parallel, but perhaps something is lost in translation). A few Trump hangers-on were lingering outside the US Embassy next door, one driving circuits of Gangwhamun Plaza in a pick-up covered in slogans.

They looked dirty and poor – Trumpism worldwide is often an anti-elite movement of a kind, comprising some of those who are less educated, not an elite one, despite its own Dear Leader and his leanings. Then we took the express lift (which ‘may induce vertigo’) to the top of the Lotte World Tower, the fifth tallest building in the world, where we pretended to have a boxing match on a glass floor 122 levels into the night sky. Boys. (I won.)

Then on Saturday I met Professor Eun-gwi Chung, who had translated my poems for the reading on Monday, and the doyen of Korean-to-English poetry translation, Brother Anthony of Taize, before heading to Incheon to visit Korea’s biggest Chinatown and say goodbye to my friends Jordan and Vivi. Jordan speaks Mandarin, which made us both popular with a few of the locals. (I’ve spent a lot of time here benefitting from the brilliance of others.)

Up the hill in a park, a huge statue of Douglas MacArthur stared out towards the aforementioned docks. A sign told us all about him, but neglected to mention that he had planned to drop many nuclear bombs and to separate Korea from China and Russia by spraying a belt of radioactive cobalt across the neck of the Korean peninsula, before Truman decided instead to get rid of him. I also revisited several old haunts: the City of Literature offices, of course, and Wonmisan, my new favourite small mountain, for my final South Korean sunset. As I stepped off the summit pagoda for the final time, I wanted to cry.

And I wrote, and wrote, and wrote. Some of what I wrote might actually be quite good, so says me, though I now need some time to work that out. As I gaze down now from 35,000 feet, a huge city in China – Tianjin? – looks like a molten web in the early evening. I am returning happy, with a full heart, head and stomach. All too soon, the name-tagged, depleted, mono-cultured plots of England will hove into view and I’ll be on terra firma in an identikit airport terminal a train ride from home.