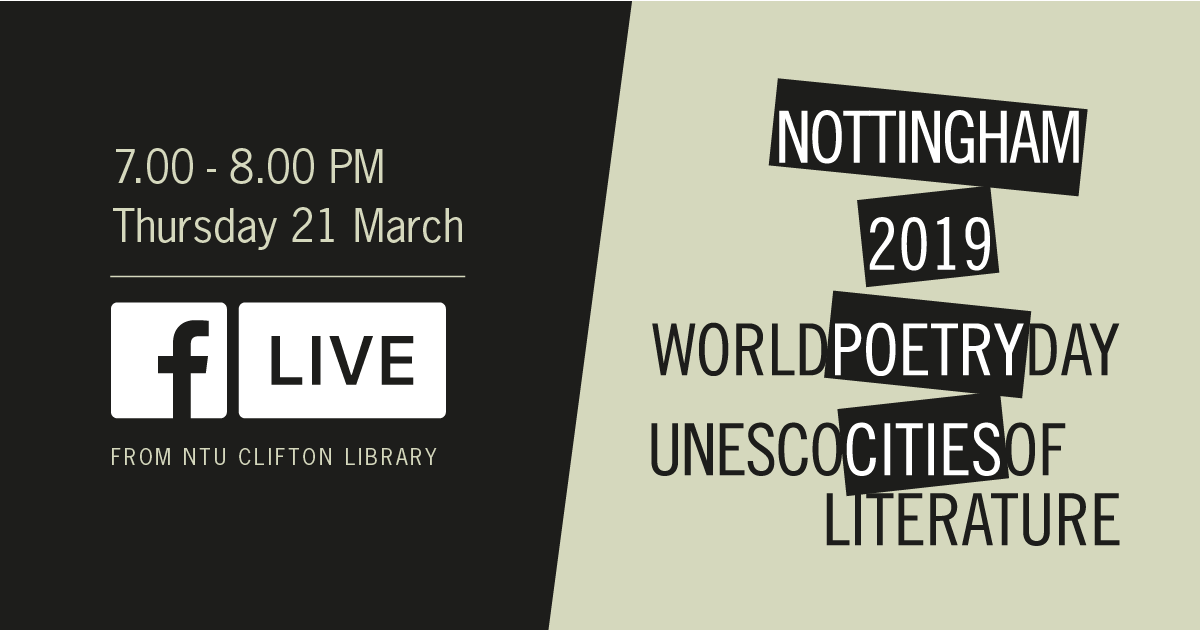 On World Poetry Day (this Thursday, 21st March) we will be running a FB Livestream of a fantastic poetry event.
Find out more …

Nottingham Trent University (NTU) and Nottingham City of Literature are working in partnership to host an event to celebrate World Poetry Day on the 21st March. World Poetry day, declared by UNESCO in 1999, is an occasion to honour poets and celebrate one of humanity’s most treasured forms of cultural and linguistic expression.

This year, UNESCO Cities of Literature Network has committed to promoting the UN’s Sustainable Development Goal: Gender Equality, by creating a platform for women to express their ideas and experiences of gender issues. This year’s Nottingham City of Literature event will be supporting this goal by promoting and listening to the voices of 12 female poets, who will share poems reflecting on all stages and ages of being a woman.

The event will see the talented women poets performing at NTU’s Clifton Campus library, surrounded by the books that have nourished their writing. UNESCO aim to ‘build a better world with words’ and the decision to use the NTU library very much reflects their fundamental belief in libraries as places to foster literacy and education. Many of the poets are students or alumni of our MA in Creative Writing and PhD candidates who contribute to the rich literary research culture of the university. The performers include Becky Cullen, Panya Banjoko, Tuesday Shannon and Victoria Zoe, as well as NTU Writer in Residence Bridie Squires.

The event will be live streamed on the Nottingham City of Literature Facebook page, in a unique way of engaging new audiences with cultural events in the city. This will allow the poets of Nottingham to reach audiences who are unsure about attending live events, as well as poetry enthusiasts from further afield.

Join in via the Nottingham City of Literature Facebook page from 7pm on the 21st March.

Panya Banjoko is an established writer and performance poet. Her collection Some Things is published by Burning Eye Books. She is a Vice Chancellor’s scholarship PhD student at Nottingham Trent University (NTU) and has recently undertaken a writing residency in Jaipur.

Julie Gardner likes writing short fiction and poetry. She taught for over forty years and moved to Nottingham in 2016. One of her daughters lives in Norwich, her dad came from Manchester and her next-door neighbours moved to Dunedin, leaving her their cat.

Lauren Terry is an AHRC-M4C PhD researcher at NTU, exploring the dynamic connections between (neuro)psychoanalysis, modernist poetic language, and material objects. She is published by two Nottingham presses, Launderette Books and Mud Press.

Victoria Zoe is from Malta and has been in Nottingham for 4 years as a BA and MRes student. Victoria Zoe was awarded the inaugural Carcanet Press/PN Review prize for her undergraduate Creative Writing dissertation.

Sofi Bajor is a poet and moved to Nottingham as a student. Her pamphlet ‘Spiral Mind’, developed during an MA in Creative Writing, features lyric poems which capture a moment in time.

Tuesday Shannon’s poetry is featured in ‘Take Three: Volume One’ from SoundsWrite Press. She is a PhD researcher writing critically and creatively about industrialisation in the North. Tuesday has also studied at Teatre in Barcelona.

Hannah Cooper-Smithson also came to Nottingham as a student. Her poetry has been published online and in anthologies. Her PhD thesis, funded by M4C, explores eco-poetry, and how unconventional poetic forms can destabilise the boundary between human and nature.

Jo Dixon’s debut pamphlet, A Woman in the Queue, was published by Melos Press in 2016. She recently delivered creative-critical writing workshops at UNESCO City of Literature events in Poland, Ireland and Estonia. A critic and academic, she is Research Assistant in Critical Poetics at NTU.

Caroline Stancer is a poet interested in comedy and poetry about people on the margins of life. She is currently a student on the MA in Creative Writing at NTU.

Birgit Friedrich started writing at a mature age but says she is not looking back; the NTU MA in Creative Writing has become an essential part of her life and although poetry is rather new to her she is loving it. She teaches her native language, German, in higher education.

Aly Stoneman is a poet and PhD candidate thinking and writing about the washing away of the British coastline. She was founding Poetry Editor of Leftlion magazine, showcasing the work of local poets. She is AHRC-M4C funded. Bridie Squires is the first Poet in Residence at Nottingham Trent University. An established poet and spoken word performer, she is editor of LeftLion magazine.

The event is hosted by Becky Cullen, a poet, lecturer and Research Fellow at Nottingham Trent University (NTU), working with Nottingham UNESCO City of Literature on the Poetry Pulse digital poetry hub project. Her pamphlet, ‘Majid Sits in a Tree and Sings’, was winner of the 2017/18 Poetry Business Book and Pamphlet competition.