A Week in the Life of a City of Literature Intern

When I step off the tram, I look around like a tourist. B-e-e-s-t-o-n… what is this place? The furthest I’ve ventured outside of the city is Wollaton Hall and I was forced into that. I’m a Mancunian in Nottingham and after graduating, I decided to hang about and struck gold with a Digital Marketing internship at Nottingham’s City of Literature. Today is Wednesday and I’m meeting Matt, the projects and communications manager, in Beeston.

Instead of meeting in the office, I’m told to find a café called Froth where we will be interviewing Clare Harvey, a local author. The café is nice and understated, like all cafes these days. She’s brought a large black dog which lazes at her feet while Matt asks questions. I’m learning a lot – an interview isn’t a Q&A but more of a conversation. It’s up to you as an interviewer to get quality answers, and Matt tells me later on that it’s always good to find a ‘hook’ to reel in the audience.

It’s unusual to be in Beeston on a Wednesday. The office is located at Sneinton Market’s Creative Quarter – the tail-end of Hockley – and is where I spend the majority of my working hours. It’s a hub of creativity within the already dynamic area – LeftLion share their office with us so there is a true buzz of creative chaos surrounding me. Before anything else, we pick a #nottswordoftheweek every Monday and then begin the organising of content for the week – website and social media.

I’m writing new content every week in the form of listicles, book reviews, and social media copy. I have my own project of revamping the Instagram page which I undergo with pride. You see, the team may be small – only three in total – but the dedication to the cause is palpable. Sandy, the Director who connects the cogs, is inspiring to work for. I recall attending the Diversity in Arts conference at Nottingham Playhouse and had the pleasure of listening to her address a theatre full of important people about the obstacles she herself has overcome 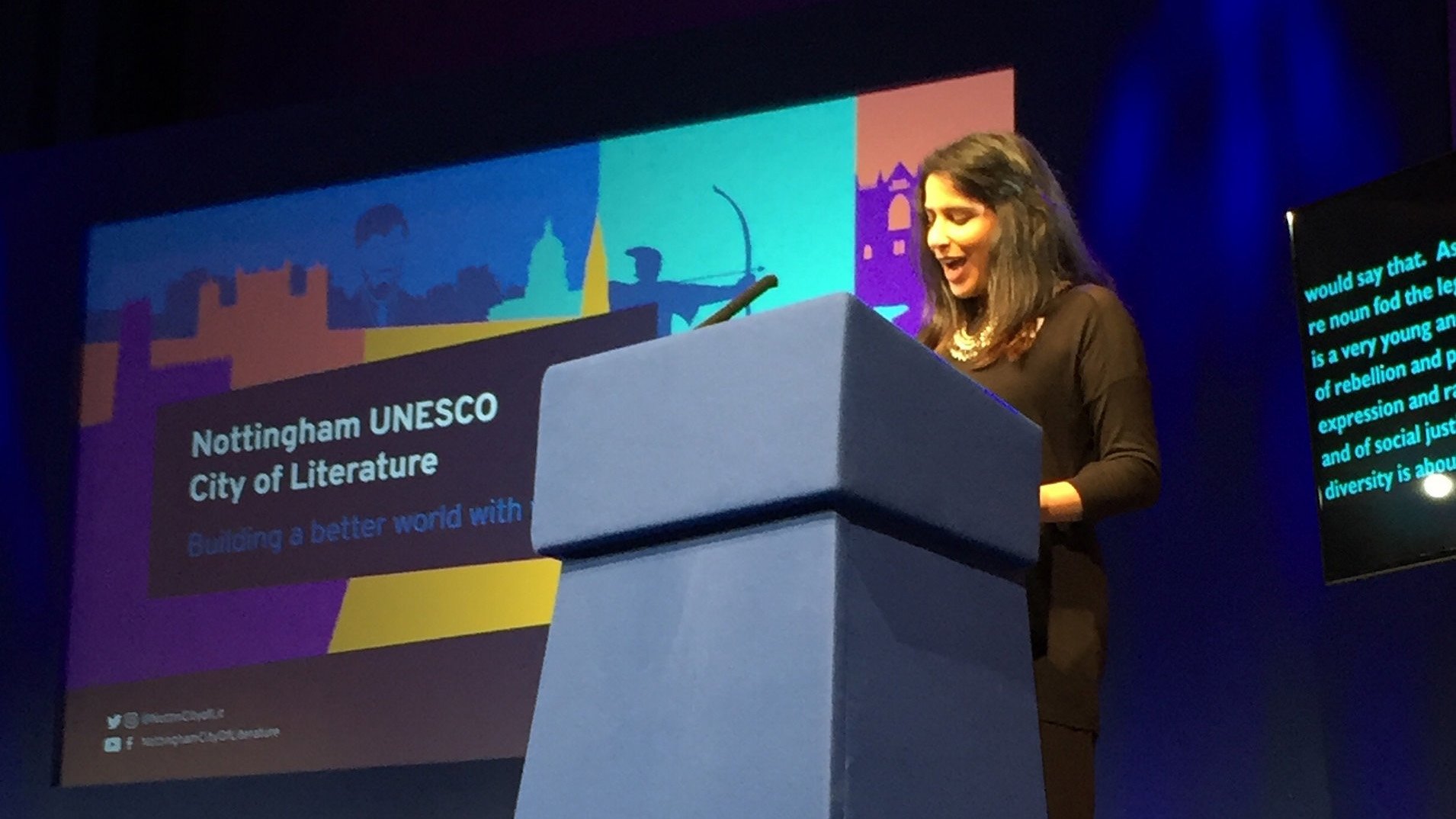 Sandy at Diversity in Arts

One Friday evening the executive assistant, Leanne, picks me up in her Toyota Yaris and we proceed to Birmingham: Georgina Wilding (our YPL) is performing at Hit the Ode in the city centre and I’m tasked with taking pictures for social media. Leanne, a spoken word poet outside of the office, takes to the open mic and finishes her performance to hollering and applause. I holler alongside the audience, amazed that the quiet office worker I’d come to know possesses a natural stage presence, which made me blush with admiration.

Georgina goes on stage shoeless for her featured poet slot and takes us on a journey through the streets of Nottingham. She is the epitome of a great poet laureate and captivates the Hit the Ode crowd – spreading the infectious diversity of the city across the second floor of Waterstones in Brumland.