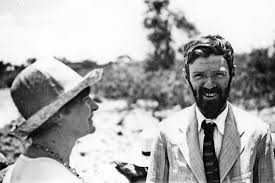 A startling new version of the controversy soaked Lady Chatterley’s Lover has been uncovered in DH Lawrence’s papers that shows how after long battles with the uptight censors, he rewrote his most notorious novel as a book for budding amateur gardener’s, stripping out all the contentious material on adultery, class and the essential hypocrisy of the establishment in the face of the burgeoning age of material modernism; replaced with instructions on running a successful and productive country estate small-holding.

It is thought by Lawrencologists that after several rewrites of the original novel, and their subsequent failure to be passed by British censors, Lawrence thought to cut his losses with a substantive rewrite -akin perhaps to James Joyce’s bowdlerised Ulysses, that sees its hero Leopold Bloom have a walk around Dublin with very little actually happening. However, it is assumed that his wife Freida veto’ed this idea as being utterly ridiculous, leading Lawrence to secrete it deep into his personal effects where it has only recently been uncovered, between some drawings of dogs and a list of his favourite haircuts.

…had he lived longer than his 44 years, would have mellowed into a much more gentle writer, perhaps even turning out a couple of cookbooks

‘Mellors the Cheerful Gardener’, written in a surprisingly light tone by Eastwood’s finest, is a heartwarming tale of the titular horticulturalist’s garden potterings, as he instructs the blissfully married Chatterleys on over-wintering seeds and the best brands of cloches. This version seldom strays too far into the controversial, though Mellors bold decision to plant out his courgette plants in late April rather than the more usual mid-May period shows that Lawrence could hardly help himself when it came to kicking against convention.

The Federation Of Ongoing Lawrence Studies has reacted to the news with enthusiasm. “Any new works by Lawrence are a welcome find. It shows that David Herbert Lawrence was not just the raging force of nature we usually assume but, had he lived longer than his 44 years, would have mellowed into a much more gentle writer, perhaps even turning out a couple of cookbooks”.

Professor John Beardsell, who has written many books on the 1960 Chatterley trial, said “This new version may lack the punch that the original has, and is unlikely to bring the rigid social mores of post-war Britain crashing down and usher in a more enlightened age of sexual freedom and class consciousness, but I imagine if the prosecution had held aloft this book, rather than the unexpurgated version held up that fateful day nearly sixty years ago and asked the jury ” Is this a book that you would even wish your wife or your servants to read?” the likely answer would have been “Yes, especially if either wished to significantly increase their crop yields across their garden or allotment patch”.

Monty Don has been contacted for comment, but has failed to response at time of going to press.