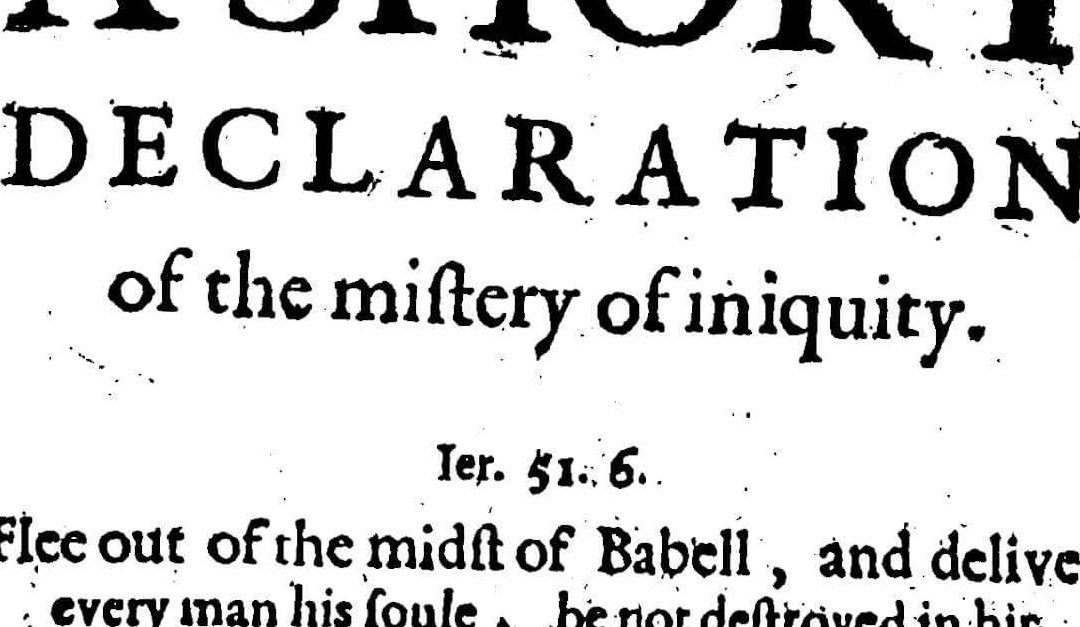 There was a time in England, not so long ago, when it took courage to call for religious freedom. Even the suggestion of such a thing was radical, dangerous and illegal. It was a writer from Nottinghamshire that laid the foundation for religious tolerance. His argument that followers of all faiths should be free to believe in the God – or no God – of their choice, and practice any religion, had a global impact influencing the American Constitution and the Universal Declaration of Human Rights.

The story begins with a book compiled by Nottinghamshire’s Thomas Cranmer, the Book of Common Prayer, once placed in every church in the land. Cranmer’s book is responsible for many widely used phrases such as ‘ashes to ashes’ and ‘to love and to cherish’.

Cranmer was a clergyman, sought by Henry VIII had as an advocate in his desire to divorce. In 1533 Cranmer was chosen as Henry’s first archbishop of Canterbury. He duly declared the King’s marriage void. Two men from Nottinghamshire who actively supported the Reformation were George Lassells, who helped with the dissolution of the monasteries, and John Lassells, who was a leading advocate of continued religious reform amongst staff and provided a report that led to the execution of Catherine Howard.

After Henry VIII’s death, the House of Lords passed The Act of Uniformity, abolishing the Latin mass in England and stating that all services must be conducted in English and use the Book of Common Prayer. Loyal Catholics burned the book. In a divided nation and time of mass killing, Cranmer produced a new and more radical Protestant prayer book in 1552. With the premature death of the new king, Edward VI, Cranmer’s plans were left in ruin. When Mary, a committed Catholic, became Queen, Latin mass was back, and Cranmer was tried for treason, and burned to his death in 1556.

After Mary died (in 1558), Elizabeth (a protestant) became Queen. Elizabeth adopted the Act of Uniformity and stated that everybody had to attend the Church of England and use the Book of Common Prayer. Those not doing so were to be punished.

Up in north Nottinghamshire all was not well. Not satisfied with the level of reform, a group of puritans wanted change. Among the reform they craved was not to be told how to prey, or be told which words to use. They wanted open prayer not a common prayer book, but by 1583, the new Archbishop of Canterbury, supported by the new Archdeacon of Nottingham, insisted that clergy agree to the full use of Cranmer’ book.

By the century’s end the law had further tightened. Those wanting to attend the church of their choice had little option but to conform or leave. Many of the group bided their time, but the new king (King James, 1603) – turning out to be more conservative than they had hoped – refused reform. In these times it was illegal to play games (or even run) on a Sunday; it was illegal for a priest not to wear a surplice; and illegal not to have your children christened. It was however, legal to abuse others for their religious practices. After local clergy were removed from office, Askham-born Thomas Helwys, who had now settled at Broxtowe Hall, had seen enough. The only layman in a group of rebels he developed a Nottinghamshire network of some of the most religious radicals in England and, facing further arrests, they prepared for action.

In 1606 a conference was held at which some decided the best option was to move to the Netherlands. A year later, John Smyth, a leading separatist and radical theologian, was amongst those in Amsterdam. Helwys helped fund a move for others in 1608 before going himself. Smyth was the pastor that Helwys followed and they became the first two Baptists. A group from Scrooby settled in Leiden, many of whom would become the Mayflower Pilgrims and establish the American congregation.

After splitting from Smyth and others, Helwys wrote four or five books, returning to England in 1612 to start the English Baptist Church. That same year he wrote A Short Declaration of the Mystery of Iniquity, in which he argued that the State should have no control over religious faith, developing the view expressed by Smyth that magistrates should not be involved in matters of conscience. Helwys’s writing called for complete liberty of conscience in matters of religion for all people and argued for the same rights for all faiths.

The Mystery of Iniquity, split into four books, was one of the earliest English Baptist documents. For Helwys, any relationship with God should be both personal and voluntary. He identified two beasts, the Roman Catholic Church and the Church of England, and wrote of the cruel spiritual bondage of uniformity of interpretation, and stated that by forcing a single interpretation upon the people, the Church of England was guilty of spiritual tyranny. An autographed copy of his The Mystery of Iniquity was sent to King James. Helwys was subsequently arrested and sent to Newgate prison where he died.

The idea that there should be a separation of state and the church was not new but Helwys was the first to radically include any and all religions, and to write the argument in such terms, including the point that anyone should be allowed to change religion. He may have died but his argument lived on.

Helwys’ ideas of tolerance were further developed by his friend John Murton and then by Roger Williams – the father of Providence, Rhode Island – who married the daughter of another associate of Helwys, Richard Bernard, former vicar of Worksop, himself an author of many books and a major influence on Bunyan’s The Pilgrims Progress.

Aware of Helwys death, and in fear of persecution due to their religion, the Pilgrims crossed the Atlantic on the Mayflower in 1620, starting new colonies. The ideas of Smyth and Helwys were picked up through Murton’s writing by Williams, who was banished from repressive Massachusetts and so set up his own more tolerant state. These ideas are reflected in the first line of the American Constitution’s First Amendment:

​Congress shall make no law respecting an establishment of religion, or prohibiting the free exercise thereof…

And in Article 18 of the United Nations’ Universal Declaration of Human Rights:

1. Everyone shall have the right to freedom of thought, conscience and religion. This right shall include freedom to have or to adopt a religion or belief of his choice, and freedom, either individually or in community with others and in public or private, to manifest his religion or belief in worship, observance, practice and teaching.

2. No one shall be subject to coercion which would impair his freedom to have or to adopt a religion or belief of his choice.

For much more on this story, and the stories of other important and influential rebels from these parts, I recommend the following book:

Adrian Gray’s From Here We Changed the World: Amazing Stories of Pilgrims and Rebels from North Nottinghamshire and West Lincolnshire tells the stories of local people, their struggles and sacrifice, showing how those from our villages changed whole cultures. With many images and fascinating biographies readers can discover how the origins of most of the important English-speaking Protestant denominations can be traced back to North Notts (and West Lincs). We have produced the first generation of Puritans, the Separatists that followed, Congregationalists and the ‘Mayflower’ Pilgrims and the first Baptists; then the Quakers, the Wesleys, Methodism and the Salvation Army.

Adrian Gray’s fascinating book is available from the Bookworm bookshop in Retford (email sales@bookwormretford.co.uk) and the Nottingham Tourism Centre. It can also be ordered from most bookshops.

Gray is a local historian and tour guide. With an MA in history from Cambridge University, he is the author of more than twenty books including several titles on Lincolnshire and Nottinghamshire. He is currently finishing off a book to be called Land of Prophets and Pilgrims and is part of the wider leadership team of Retford Baptist Church. Visit http://pilgrimsandprophets.co.uk/