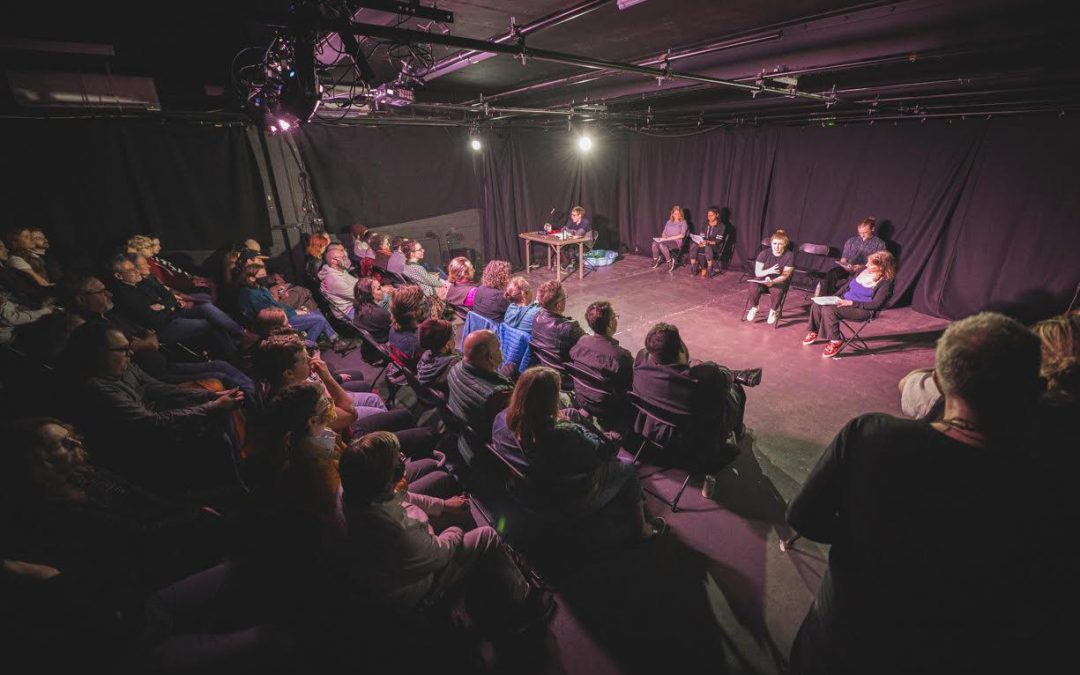 On the 18th of March a new play, Horsemen. had its first public reading at Nottingham’s NonSuch Studios. It was a sell-out crowd. The play is a comedy of redemption, rebuilding and identity that tells the story of the Horsemen of the Apocalypse after they’ve destroyed the earth and been left behind in the wasteland of their own creation, much to their surprise. They’re stuck navigating the labyrinth of their employer’s bureaucracy to get their reward, the undefined Paradise Portfolio. Whilst waiting for a solution they discover their powers have creative applications and set about rebuilding whilst they wait. The play sits at the conflux of Terry Pratchett, Netflix’s The Good Place and Waiting for Godot.

Hopepunk is a cultural subgenre that explores the disruption of society by empathy, hope and positive action.

The reading concluded a fortnight’s development period, led by Leicester based director Jake Leonard, has been funded by Arts Council England. It has been crucial in finalising the script. The play is ambitious, an apocalyptic world with supernatural beings is a hard thing to bring to the stage but the ambition doesn’t end there. The text has been written to be fully trait blind so that any cast could pick up the text and take on any role, regardless of age, sex or heritage. The first part of the development period was an intense run through of the script six times, with each cast member taking a turn at each of the six characters. This script has been a step in trying to create universal roles that let actors truly make a part their own, no matter their background.

The original idea came from a callout for pieces of Hopepunk audio theatre that used live foley sound effects. As a lifelong fan of Monty Python, my mind drifted to coconut shell hoof beats and so the Horsemen rode into my mind. Hopepunk is a cultural subgenre that explores the disruption of society by empathy, hope and positive action. It is an optimistic approach to storytelling, sorely needed after the last two years. Even with Hopepunk ideals at the heart of the story, the impact of COVID can be felt throughout the script. The sudden halt to life and the subsequent space to reflect clearly maps across to the first lockdown in March 2020.

The Midlands have been key to this project. I came to Nottingham to study in 2011 and found a creative home in the city with groups like MissImp Improv theatre and more recently the GOBS Collective and Nottingham Queer Arts Collective. The whole creative team is drawn from the Midlands, with 75% being from the East Midlands specifically. There is such a rich vein of talent in our area but when it comes to theatre, it feels like you have to work ten times as hard to be taken seriously if you live outside the M25. Work from outside gets called “regional theatre” and is often accompanied by the same enthusiasm you might give the phrase “verruca sock.” It’s absurd and highlights the vital role of organisations like the Nottingham UNESCO City of Literature project in championing work from their areas.

What is next for the project? Well, we are looking to attach an established producer to the project in order to turn it into a full touring show. As the theatre scene and the country at large returns to life, this story will be a point of connection and catharsis for audiences to laugh at. The comedy underlines the importance of hope and empathy, that is so crucial to healing as a society. I keep my fingers crossed that these horsemen will ride off into a glorious sunset.

Ben Macpherson is a Nottingham based writer, performer and facilitator. Find out more on his website.