The Madness of King George: a Gatiss+Penford triumph 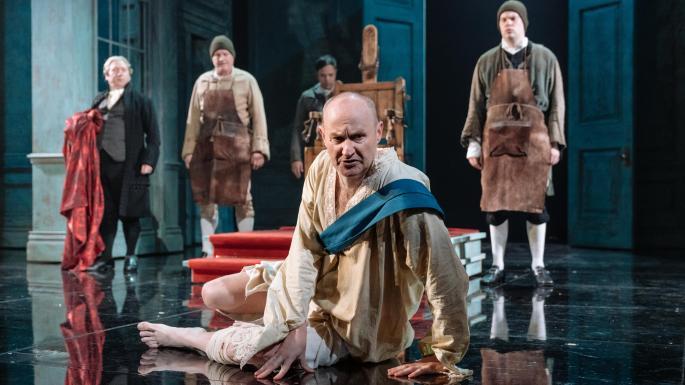 Adam Penford’s first year as Artistic Director at the Playhouse has been quite astonishing. Beth Steel’s Wonderland opened his tenure and was so brilliant it will be back next February. And you already know how we feel about his adaptation of Holes. Now it’s time for Alan Bennett’s The Madness of George III to get the Penford treatment.

Before mental illness decided to rear its ugliness, King George III wasn’t doing too bad. His appointment of William Pitt as PM was considered a favourable move, and yes, America had gained its independence, but the King was proving to be popular amongst the British public. Bennett’s play is set in 1788, 28 years into George’s reign, and follows the scrambling s of doctors and ministers to treat and contain him during a mental episode. Medicine was different back then; anti-depressants didn’t exist and bloodletting and blistering was the in-thing to do. In a society so conscious of mental health and wellbeing, today’s portrayal of a deranged King could be a hard task to get right.

In the titular role, Mark Gatiss starts the play as a confident monarch with high standards expected of his staff, family, and government. He’s a proud man and those around him don’t dare mention the American colonies in his presence (“What? What?”). But as the play and the King’s mind unwind, Gatiss becomes a harrowing shell of a ‘sane’ man, spell-binding the audience with each one of his mad rambling words. Regality no longer remains –each one of the King’s shrieks is felt in the pit of your stomach when he’s violently strapped down to be blistered. In turn, Alan Bennett’s comedy switches to a tortured drama whenever Gatiss stumbles onto the stage in his nightgown and bloody socks. Debra Gillett as “Mrs. King” tugs at the heart strings when separated from her love while the three piranha-like doctors (Stephanie Jacob, Louise Jameson, Amanda Hadingue) try to one up each other in hilarious scenes. Prime Minister Pitt portrayed by Nicholas Bishop, remains reserved throughout but has an air of underlying torment while visiting during the King’s ill spells.

Upon sitting down, you already sense the spectacular about to come from the majestically painted front cloth hiding the stage. Towering palace walls steered by the cast between scenes effectively allow the audience a window into the madness of George III. In fact, every aspect of the set design is a winner. The sound and lighting used to elapse time – and also draw focus to Pitt during Parliament scenes – transitions the stage, as if you’re watching a million-pound produced comedrama on the best HD TV possible.

Bennett’s play has been delightfully revived by Penford and an exceptional performance from Gatiss as King George III joins the plaudits of his predecessors (Hawthorne, Haig) comfortably.

The Madness of George III is running until 24thNovember at Nottingham Playhouseand some tickets are still available. Catch a live broadcaston 20thNovember at one of Nottingham’s cinemas (Broadway, Savoy, and Showcase) as part of National Live Theatre.