Last month, book blogger Zoe Toft published a post on Birmingham’s ‘Ghost Libraries’ – buildings originally built as libraries that now serve another purpose. Zoe usually blogs about children’s books, so when I met up with her a few days after the post had gone out, I mentioned that I’d read somewhere that Nottingham was home to the ghost of the UK’s first ever dedicated children’s lending library. Zoe was interested in tracking down the building, so we did a little online ghost hunting. A page on the Morley Threads website mentioned that the library was on Shakespeare Street and a photo caption on the Picture the Past web site, narrowed it down to a particular building. 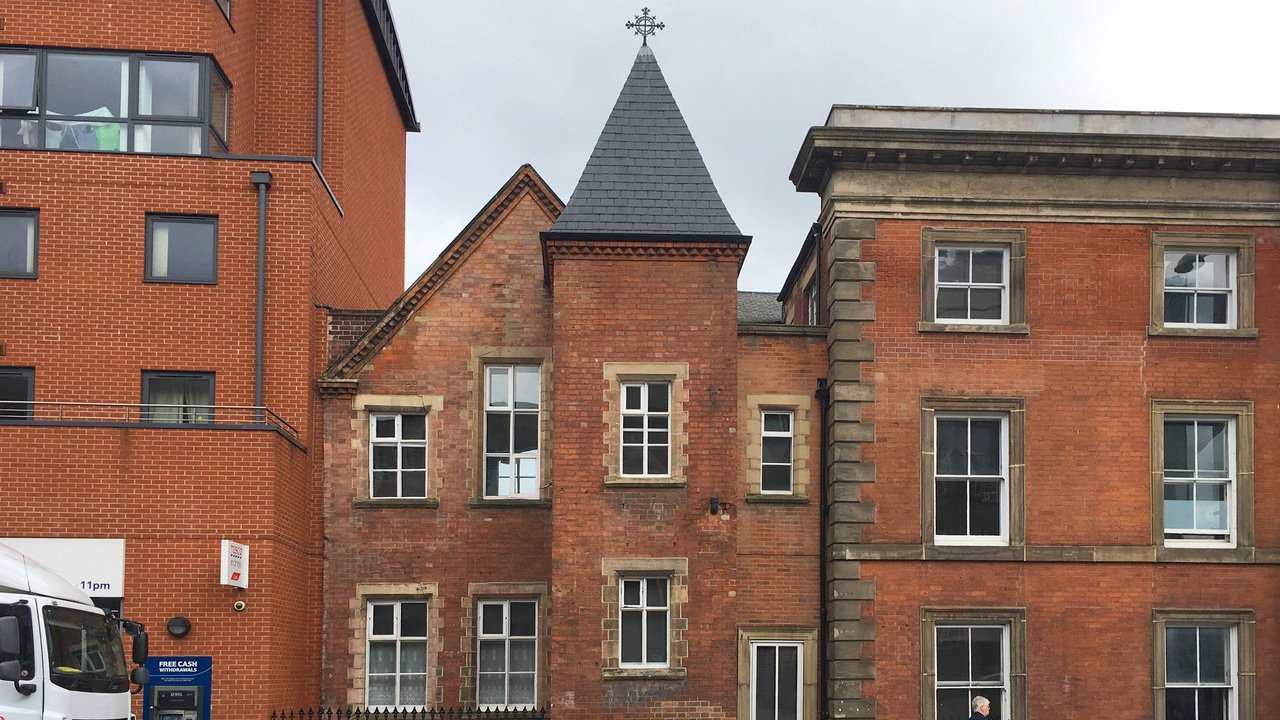 The ghost library is now part of Fortis’s Bard House student accommodation at the Mansfield Road end of Shakespeare Street.

With some further Googling, I was able to discover a little more about the building’s former life as a children’s library.

The library was created in 1882 with a £500 grant from the Nottingham woollen manufacturer and Liberal MP, Samuel Morley. According to the Encyclopaedia of Library and Information Science, Morley founded the children’s library after learning that Nottingham’s Central Library (then on Shakespeare Street) was only open to those aged 15 and over. 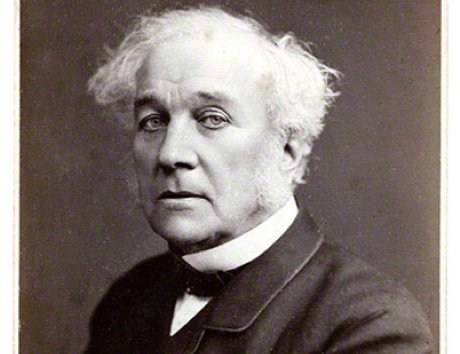 While some sources suggest that the library was originally named, “The Library for Boys and Girls”, Allen’s Illustrated Guide to Nottingham (1888) describes it as “The Children’s Free Public Lending Library and Reading Room” and notes that it was open between 4.00 – 8.00 pm on weekdays. Children over the age of 7 were allowed to borrow two books a week (at no cost) from a collection of over three thousand “carefully chosen” volumes donated by Morley.

Although juvenile reading rooms had already been opened as part of public libraries in both Westminster (1857) and Cambridge (1872) the library on Shakespeare Street was the first separately-housed children’s lending library in the UK and is widely recognised as having set the standard for children’s libraries both in the UK and abroad. The International Companion Encyclopedia of Children’s Literature (1996) has this to say in its chapter on children’s libraries:

“Perhaps the most outstanding was the Library for Boys and Girls in Nottingham, which was regarded as a pioneer in respect of its accommodation, its balanced collection of contemporary children’s fiction, furnishings and general ethos.”

Samuel Morley was ahead of his time in recognising the enormous social benefits of encouraging a love of reading at an early age. There is now a wealth of research showing that children who read for pleasure on a regular basis do significantly better in maths, vocabulary and spelling than those who rarely read, giving them an academic advantage that lasts the whole of their lives. For many children establishing a reading habit would be impossible without access to a well-stocked, well-run children’s library like the one first created by Samuel Morley.

Nottingham should take tremendous pride in the trailblazing role it had in promoting children’s literature and literacy and I think that Morley’s pioneering library is well worth commemorating in some way. So, last weekend, I visited the ghost library with a couple of young readers and stuck this plaque to the wall. 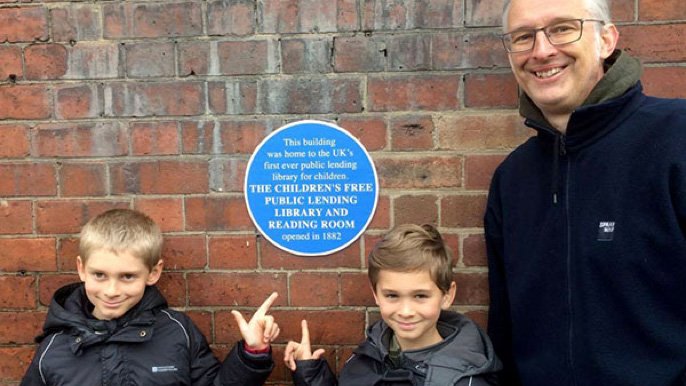 Alexis, Kristian and me with our prototype plaque.

Our plaque was made of cardboard and we took it with us when we left, but we’re hoping it can be replaced with something more permanent and official. I’ve already been in touch with Fortis, the building’s current owners, who have confirmed that they’d be happy to have a plaque fixed to their building. Now I just need to find an official plaque provider, like the City Council or the Civic Society, who agrees that Morley’s ghost library is well worth commemorating.

If you think you can help, do get in touch! You can contact me via the City of Literature office.

Jonathan Emmett has written over 60 books for children including Bringing Down the Moon, Someone Bigger and The Princess and the Pig. His work has been translated into over 30 different languages and has won several awards both in the UK and abroad. You can find out more about Jonathan and his books at his website.