The Future of Booksellers: guest post by Ross Bradshaw 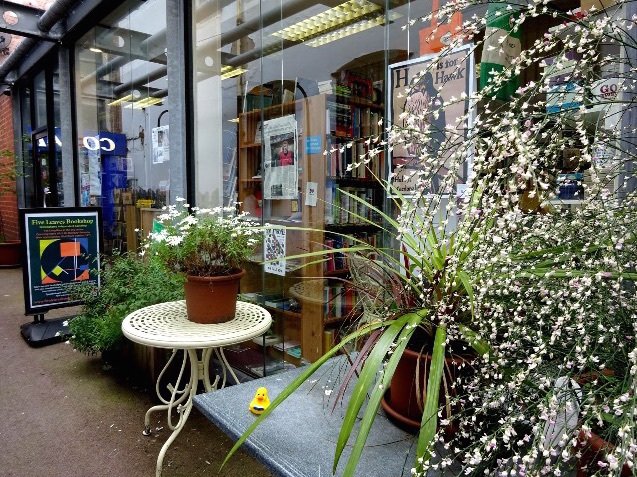 When the purpose-built Scottish Parliament opened in 2004, the poet laureate equivalent of that country was commissioned to write a poem for the new building. It enjoins the Parliamentarians to do their job for the people who elect them- you can read it at http://www.parliament.scot/EducationandCommunityPartnershipsresources/A_Poem_by_Edwin_Morgan.pdf. The poem is still prominently displayed and shown to everyone who takes a tour around the place. But it also shows that the Scottish government is proud to put literature at the heart of its world.

I thought of this at the book trade reception in the British Parliament on the 12th July as there we were, primarily the Publishers’ Association, Booksellers’ Association and World Book Day, among those keenest to ensure that literature at least gets onto the agenda in the UK Parliament. Yes, there were authors there too – indeed, the event was hosted by Margaret Hodge who spoke three weeks ago at Lowdham Book Festival – but it was mostly a trade event.

On the one hand, people had a spring in their step. Physical book sales up, ebook sales down. But in Bedford Waterstones pay £850 a square something (foot? metre?) in rates and Amazon’s warehouse just up the road pay £52. I can’t remember what was being measured, but it doesn’t matter, Waterstones is paying sixteen times as much to sell the same books. To put it another way, shops subsidise big tax-avoiding sheds. One shop, Tales on Moon Lane in Herne Hill, London – the detail carefully dropped into a video showing what bookshops do for children’s literacy – has seen its rates go up from £60 a month to £300 a month and, soon, £700 a month if the current valuations hold. 25% of high street bookshops are expecting rate increases of 10% or more. How can they respond, especially if they are under pressure of rent rises – a nightmare in London particularly? Reduced staff? Reduced commitment to the community?

The event was billed as non-political but was as political as you can get, with those who want a reading nation on one side and those who are pricing bookshops out of the market on the other. The Business Rating system – as the Booksellers’ Association says – is no longer fit for purpose.

The other shadow hanging over the meeting was Brexit. 54% of books produced in the UK are sold abroad. That alone indicates why the Publishers’ Association has worries.

But it was not all gloom. World Book Day – a time when schoolchildren are given vouchers to spend on specially printed £1 books has been a major success;  a project funded by publishers, booksellers and (by donating their work) authors. Current research shows that one out of every four children who takes home a WBD book will be taking the first book they have ever owned, and six out of ten children say they are likely to read more as part of their involvement in WBD.The video featured our own City of Lit Sandeep Mahal .

Mention of World Book Day takes us full circle to the opening by Margaret Hodge, who talked of her life as a Parliamentary Amazon-basher, but also someone who publishes books, who appears at festivals, who – like all her friends – is in a long-established book club… and now as she sees her grandchildren getting excited by their involvement in World Book Day. Margaret Hodge, like everyone else in the Members’ Dining Room at the House of Commons on Wednesday, wants us to become a reading nation.