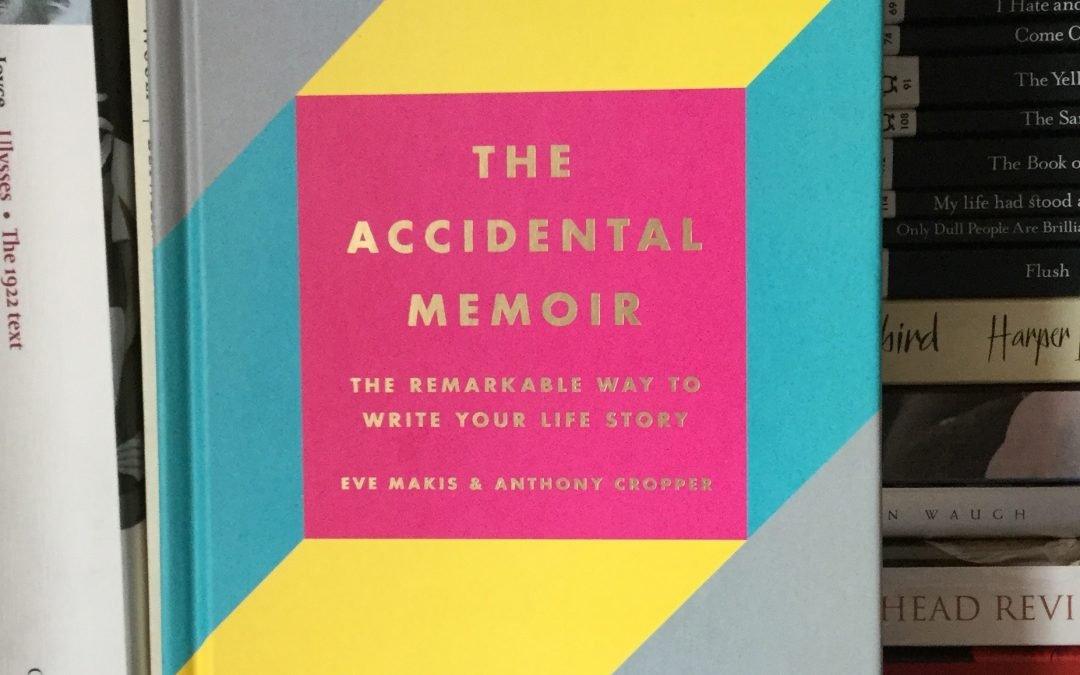 Since 2007 I have kept a diary. I write in it almost every day, and it may be an accurate documentation of the things I do, but it is far from being memoir-like. I usually start off by writing about how early or late I managed to get up, and end the day with a sleepy scrawl about how I don’t have time to write about what I did, because I’m too tired. Occasionally, something amazing happens and my diary is where I turn to so that I’ll always remember how I felt on that day, in that moment.

Despite my dedication to my diary, I’ve never sat down and tried to write a memoir. Maybe because I’m still quite young, or because I don’t think anything significant has happened to me yet, but then I heard about The Accidental Memoir and it piqued my curiosity.

The day I received a copy of the book, I went home and sat on my bed and opened it up. As soon as you open the book, it says ‘This is the story of…’ with a space for your name. This makes the book feel personal from the very beginning, with a sense that from this point on, your copy will be unlike any other copy, because it’ll contain your story and yours alone. I felt like I was embarking on a journey in which I would be the main character: both my present and past self.

The foreword, written by Alexander Masters (Stuart, A Life Backwards, 4th Estate) tells the story behind the book’s creation, and the power it holds for every individual to tell their life story, whether they think they have a story worth telling or not. The trial edition of the book, which was funded through an Arts Council Grant, was tested on refugee groups, homes for the elderly, and prisoners. The book managed to extract stories from these people that had been long-buried. The line that had me most excited to begin writing was this: ‘When you’ve finished all the assignments, pull the printed part of the book away and you’ll be left with a well-structured, evocative memoir’. This filled me with inspiration, and I had a vision of the first draft of a memoir, so I picked up my pen, faced with the question: Who are you?:

I am introverted, bookish, me. I need my mum every day of my life, and dream that I can fly.

Thinking about myself so much filled me with doubt initially, and I wished to have more exciting experiences so that this book would be filled with adventure, but I soon started to love my small world as a person who has lived in the same house all her life. Instead of seeing it as boring, I saw it as a rare thing, a gift:

When I walk onto this street it’s like I’m leaving the rest of the world behind.

Instead of moving house, I moved rooms. My dad died when I was still quite young, and when I got older I left my childhood bedroom and moved into his. TAM asked me to write about a room I’ve lived in, and I confronted this transition that I’d made and what it means to exist in a room that I still think of as my dad’s:

I’m just an idea that the room is still thinking about.

The book is packed with beautiful illustrations, images, quotes, poetry and book recommendations, and this makes it feel like a scrapbook. Pages take on the form of old notebooks, scrap paper, and a variety of objects that you might find in real life. This works well to inspire: it’s much more fun to write on a page which is pretending to be two postcards, than a page which is blank white space. It means that with every page turn you never know what quirk you’ll be greeted by next.

One of the most significant moments came from one of these illustrated pages. On page 24 there’s a family tree. It’s not one to fill in, it’s just there. It doesn’t ask you to do anything, but that tree planted a seed in my mind which made me pick up my phone and log onto Ancestry.com.

I looked up my dad (Mick) and found his death certificate within seconds, and this spurred me on to look up my Grandfather (Rudolf – which I actually found out is spelt ‘Rudophs’) and from there I discovered his marriage certificate to my Grandmother (Pamela). Finally, I looked up my mum (Paula) and found her birth record. I later showed it to her, which was serendipitous as it was actually her birthday on the day I found it. She looked at it and remarked, ‘so I do exist!’ Nothing got written in the book from this exercise, but it created a new memory and a new moment with my mum which I’ve no doubt either of us will forget.

The authors of the book, Eve Makis and Anthony Cropper, are lecturers on the MA Creative Writing course at Nottingham Trent University. I haven’t done the course, but I did do the undergraduate English with Creative Writing course, so I was very pleased to find various pages of the book which are tailored to evoke memories and memoir-writing disguised as the kind of writing prompts often included in creative writing course seminars. One of these prompts in particular (from page 38) gave me loads of material despite seeming like a really simple prompt. It featured the classic ‘favourites’ list: favourite view, favourite food, favourite song, favourite animal…which at first, I was a bit wary of in an existential kind-of way (I don’t know what my favourite anything is!) However, this prompt wasn’t asking for one-word answers, it asked the reader (writer) to ‘be as descriptive as you can’ thinking about texture, aroma, and associated or inspired feelings. I wrote about Victoria Sponge cake, giraffes, and the Back to the Future films.

I found it difficult to be as descriptive as the prompt wanted, but tried not to overthink it. The next page repeated the words ‘you are’ down the page, and we’re asked to pick out phrases from what we just wrote and write them next to each ‘you are’. This turned out to be my favourite exercise because of the way it moulded my writing into something else, adding a different meaning to my words. The next page asks us to write down the name of someone we care deeply about, and to use their name as the title for the ‘you are’ series. Wow, I thought, I’ve just accidentally written a poem about my mother. And that’s what’s great about this book, it’s simple, creative, visually stunning, and it enables you to write about aspects of your life without even realising it. It digs deep into the core your experiences:

Mum
You are the edge of land, the freedom of being,
You are fast in slow motion, escaping to a familiar place.
You are the tears because it is ending.

Without this book, I’d never have plucked those words from my mind and written them down in that order, no matter how much I tried. After doing the exercise, I wanted to take the book to all my poet friends and say: ‘Do this now!’

In two weeks, I’ve barely made a dent in the book. I’ve written about parts of my life that I had ached to write about but never knew how. It’s like I couldn’t find a way in because where do you start? But with this book there’s less ‘plotting’ and more ‘doing’, you open the book and you’re off, you’ve started writing your life story. There’s no wrong way to do it, and you can dip into any part of the book at any time.

The hardest part for me has been actually finding the time to sit down with the book, because although two weeks seemed, at first, to be a huge expanse of time in which to focus on myself, I found that my life got in the way. But coming home to the book, and dipping into it when I do have a spare moment, has allowed me shut off from the outside world and venture inwards. I’ve been writing instead of scrolling mindlessly through social media, absorbing everyone else’s lives instead of living mine.

As I write this, I’m on the eve of going away on holiday. There’s no doubt that I’m taking The Accidental Memoir with me, so that I can return to it after each relaxing day and make the most of what will one day be merely a few paragraphs from a chapter in a Word document titled ‘My Life Story by Jade Moore’.