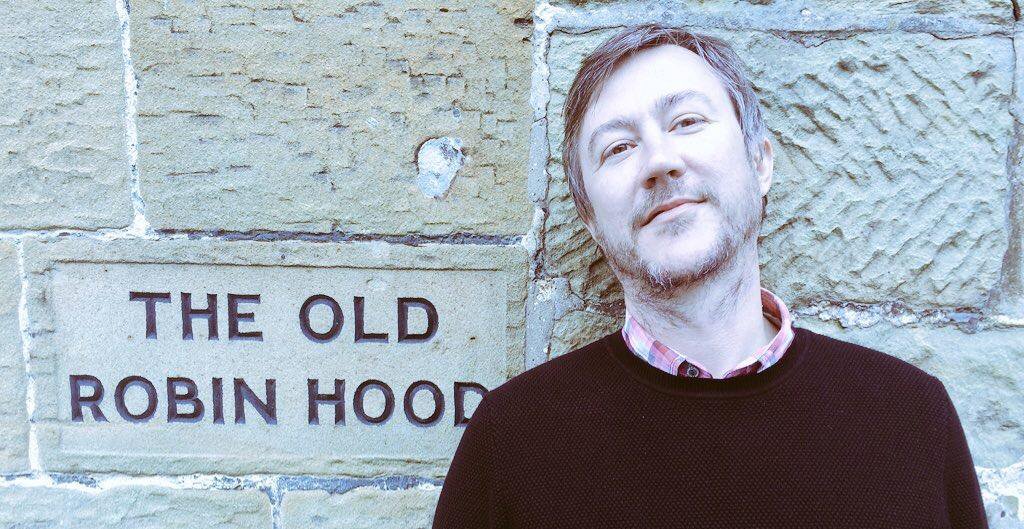 During my 13 year stint as literature editor of LeftLion magazine, dialect and accent was integral to the tone of the magazine. Our remit was simple: Get in as much chelp as possible (cheeky backchat) and don’t mek aht yer summat (don’t take yourself too seriously). Often articles were written with the south Nottingham ‘eh’ as in ‘Mardeh’ rather than the shortened north Notts ‘mard’. I love to read dialect in literature because it reminds me of my home, particularly the flat Radford vowels of Alan Sillitoe’s anti-hero Arthur Seaton or the pit dialect in DH Lawrence’s early plays.

I mention this as I’ve just spent the last six months or so talking to mining communities about dialect for a BBC Radio 4 series called In the Tongue and Talk of the People – England’s Dialect Poets. The programme starts off by exploring Nottingham dialect with Al Needham, a former editor of LeftLion. Go check out his infamous pub quiz at The Fox and Grapes which includes the round ‘On this day in ‘istreh’ (history) or listen to him exposing taboos in his retrospective podcast Chart Music. Al is a supremely talented writer. I commission him for every project I do.

Andrew Graves also features. He may not have made it into Five Leaves’ Nottinghamshire Writers, but his work is pure Notts, taking an unassuming trot through the city’s backstreets. He treats us to Still Notts Talking. Look Back in Anger is currently creating poems inspired by Notts dialect so she reads us three verses of Mardy. Local beatboxer Young Motormouf ruffles up the airwaves with his beat poem/rap that incorporates local slang and mining dialect.

Once we’ve cleaned up the Notts accent we move on to the language of mining communities, known as pit talk. The narrative of mining communities has tended to be from a Yorkshire or North East perspective and so I had a natter with Natalie Braber, a professor of linguistics at NTU, and David Amos, an eight generation miner, who have been collecting local dialect and stories to bring Notts back into the conversation. Coal mining in the East Midlands can be traced back as far as the medieval period; it’s about time we had our say.

I visited them and various performers at ‘Songs and Rhymes from the Mines’ as part of the Nottingham Poetry Festival. Alan J Taylor performs under the pseudonym Al Rate (‘Alright’) and has penned a song about powder monkeys – the coal miners who got paid extra for risking their lives by letting off explosives underground. Whereas Bill Kerry III discovered that his grandfather worked at the same pit in Heanor as the dialect poet Owen Watson. He’s adapted the lyrics to folk songs so that they remain accessible to new generations.

And of course DH Lawrence features. We visit his old gaff Breach House in Eastwood as this was the inspiration for ‘The Bottoms’ in his mining novel Sons and Lovers. Lawrence is perhaps the earliest writer to use mining and local dialect in his writing. His early plays use multiple variations of speech patterns that drew influences from the Erewash Valley, Derbyshire and Notts. By using dialect, Lawrence enabled the reader to understand a collier’s particular social class, their education, and their intelligence.

I grew up in a small mining village outside Nottingham called Cotgrave. They were tough times, particularly during the strike. I vividly remember going around to a friend’s house and noticing he only had a milk box in the front room (which he used as a seat) and asking him if he’d just moved in. He said no. It was only years later when I read Harry Patterson’s Look Back in Anger I realised out of 32,000 local miners, his dad was one of the 2,000 strikers. Cotgrave is now a quiet little village. The pit closed down in 93, and the Black Diamond pub that was once rammed with men quenching payday thirst has been flattened and turned into new builds.

The Radio 4 programme has given me the opportunity to revisit my childhood, to explore my love of dialect, and to promote some local poets who embody the true spirit of Nottingham culture: Lairy, sweary, and quite contrary. Let me know what you think using the hashtag #TalkandTongue

James Walker’s Talk and Tongue: Dialect Poets Episode 2 is broadcast on BBC Radio 4 at 4.30pm on Sunday 20 May. It’s a Made in Manchester production. https://www.bbc.co.uk/programmes/b0b3bb2h