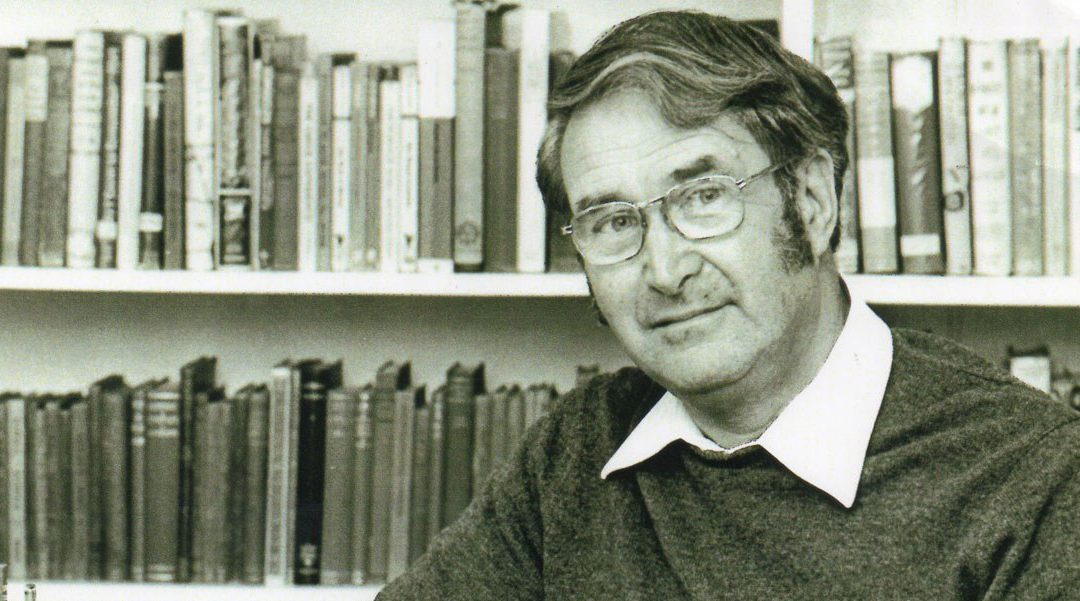 Stanley Middleton had a keen ear and is perhaps at his best when his characters are arguing or pontificating, over a fence or a drink. I think it’s through his strong Nottingham-voiced dialogue that his writing best contemplates life’s mysteries and concerns, and demonstrates his observational humour. If you’ve not read Middleton before, I urge you to do so, and as this week marks the centenary of his birth there’s no better time.

Below is a top ten of Middleton’s forty-five novels. Mostly featuring professional middle-class characters in various states of personal crisis. Coming to terms with life, loss, love, retirement, death, decay and the creative struggle; they are ordinary, complex individuals with identifiable motives and recognisable issues. The following books can all be found in Notts libraries.

Thomas Harris is a schoolmaster and composer of classical music, harbouring hopes that his talent will reap the recognition it deserves. His great requiem for the forgotten, written after his difficult father dies, adds hope to this ambition in a plot that’s an unpredictable path of personal highs and lows.

I’m Thomas Harris I am. I’m somebody.

After arguing with her producer husband, a talented actress takes refuge with a Nottingham family and they go on holiday together, before she returns to her husband, seeing him in a new light. The Just Exchange is a moving novel about a dying marriage and one that is slowly coming alive. At the time of writing the book Middleton had recently moved from Bulwell to a larger house in Sherwood, now marked with a commemorative plaque.

Old age is the theme of this heart-breaking novel in which James Mansfield comes to terms with retirement having worked for decades as a schoolmaster in a grammar school. Lonely, self-critical and recovering from a heart-attack, he lives vicariously through the career of his son, but it’s to others that Mansfield has the most to offer.

Seeking understanding, a grieving and recently separated lecturer visits a seaside resort where he ponders the themes of life, death and broken relationships. Told through thoughts and flashbacks we enter the head of a disgruntled, contemptuous and vulnerable man in need of security. “Everybody judges from the point of view of his own inadequacy,” reflects Fisher whose perspective shifts in unexpected ways.

At thirty-two Edwin Fisher admitted his emotional immaturity when he thought back to those days, in that he felt again the embarrassment, the shame, the yearning to be elsewhere or some other body, which had constantly nagged him miserable.

The two brothers of the title are men in their fifties. One a schoolmaster the other a poet. Unmentioned rivalry and individual pursuits give way to some cohesion after death and drama strike the family. Conflict, friendship and growth are at the heart of the novel’s changing yet ordinary relationships.

Middleton observes the absurdities of life and the weight of death and decay. The novel’s hero is both a teacher and a talented man-of-music whose everyday existence is taking its toll. Unfulfilled relationships and unwelcome requests provide the distractions in a life most challenging. Can an achieved ambition be enough to make a life worth living or is it merely an attempt to anchor the fleeting?

He did not ruin Bach; he phrased the rich notes sharp as glass, but he would not hang about. A big work was worth five minutes of his time, and that was all…

Observational and shrewd, this is Stanley Middleton at his best as he investigates the trials of contemporary marriage as experienced by several professional couples and characters of different generations. It’s a story of the hopes and fears of the journey we call marriage, and of the nature of change.

On Vernon’s insistence, they had moved to a larger house, part of the de Courcy Estate, but he, once a puritan, self-obsessed worker, had now relaxed, begun to enjoy his fame or notoriety, made love to friends’ wives if they were attractive enough, to bimbos, to colleagues, never seriously enough to land him in trouble with anyone but his wife to whom he talked openly of his liaisons. We heard him in a silence which he misjudged.

As ageing slowly entwines John Stone, a retired headmaster in Beechnall, his past certainties recede, the solid, decent world of provincial life with its satisfactions and occasional minor adulteries give way to new threats – some external, in the changing society around them, some internal.

He often walked out to the front porch, when he’d nothing better to do, where he’d scan the trees, or the sky, sure that they’d provide him with something to think about.

The threat of violence and emotional turmoil hang over Beechnall and Middleton’s heroine as rivalries and feuds blight an am-dram society’s production of Twelfth Night after the director departs. These seems to be regular folk but as ever there’s no such thing once the surface has been scratched.

“Is he sensible? Your headmaster?”

“I can’t complain. He leaves me pretty well alone.”

Completed shortly before his death, A Cautious Approach is classic Middleton. The ingredients are there: Beechnall, middle-class professionals, ill health, love. A chance encounter between two lonely men changes both their lives in a novel with flashbacks and future expectations playing a key role.

“I taught literature and history. But the amount of marking I had to do made me question my vocation. When I read the dull, brutish accounts of historical events which they turned in for marking, I despaired. It made me think I was wasting time teaching them about King John or Queen Elizabeth of George the Third. What connection had these figures with their lives and interests, with their futures?”

This week Shoestring Press have published Poetry and Old Age (named after and including extracts from a late, unpublished novel) the first collection of Middleton’s poetry.