It’s official. After much debate and controversy on the subject, experts have finally ascertained the precise provenance of poet and Pulp frontman, Jarvis Cocker. And South Yorkshire isn’t going to be happy.

“We have looked at many aspects of the bespectacled oddball, notably old fables dating back as far as the 1970’s that tell of a gangly droll fan of corduroy active all over North Notts, and as far South as Clifton” explains Nottingham Trent University’s Reader in Indie Origins, Professor Joe Latengo “It seems we are going to have to rewrite the pop history books immediately”.

Latengio, who gained fame and notoriety with his groundbreaking theory that Morrissey was actually from Tunbridge Wells, Kent; while also positing the Bez+Basildon Conjecture, has called for a swift reclassification.

“We discovered that the class-tourist student described in the hit-song ‘Common People’ was actually from West Bridgford, not Greece as originally thought.

John Baird, editor of the Notts Lit blog, agrees with the theory “

“As everyone knows, Cocker’s Common People was inspired by DH Lawrence’s Women in Love:

‘Ursula was superficially thrilled when she found herself out among the common people…’ (Women in Love, Ch 26)”. Proof if there ever was proof. 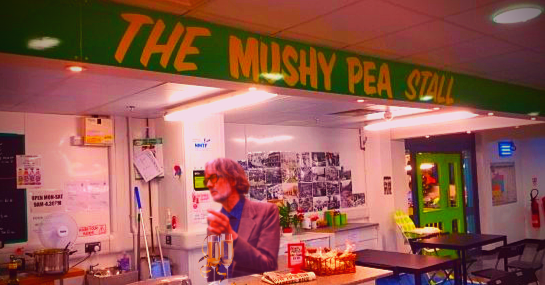 Sheffield residents were stunned. “I’m stunned” said long-time Attercliffe resident Shaun Bourne “‘Ere were I and loads others all thinking that Jarvis Cocker was barm-cake through and through, Henderson’s Relish pumping through his weedy veins. Now we find out it’s HP Sauce coursing ‘round. Gutted mate, absolutely gutted”. The 80ft shrine to Jarvis that stands astride the Meadowhall shopping emporium is expected to draw a large crowd to it this weekend, before its inevitable dismantling.

The mood in Nottingham was notably brighter “We are delighted to welcome Jarvis to the fold of top-notch local megastar musicians, with Sleaford Mods, Jake Bugg and that lad out of Stereo MC’s” said the Mayor of the city, Sir Roger Crophill “We’ve heard his lyrics can be a tad on the mucky side, so hopefully he’ll read up on some DH Lawrence for inspiration”

Following the news, Cocker was taken into custody at the National Justice Museum awaiting a graduated release into Nottingham life “The be ‘onest it’s a relief’ the languid sporter of suede admitted “It’s been murder not being able to say ‘Ayup mi ducks’ every time I got up on stage, and frankly wi’ me being into books and poetry and that, being in a City of Literature meks real sense”. He then retreated into his cell while doing that funny little dance with his arms all over the place.