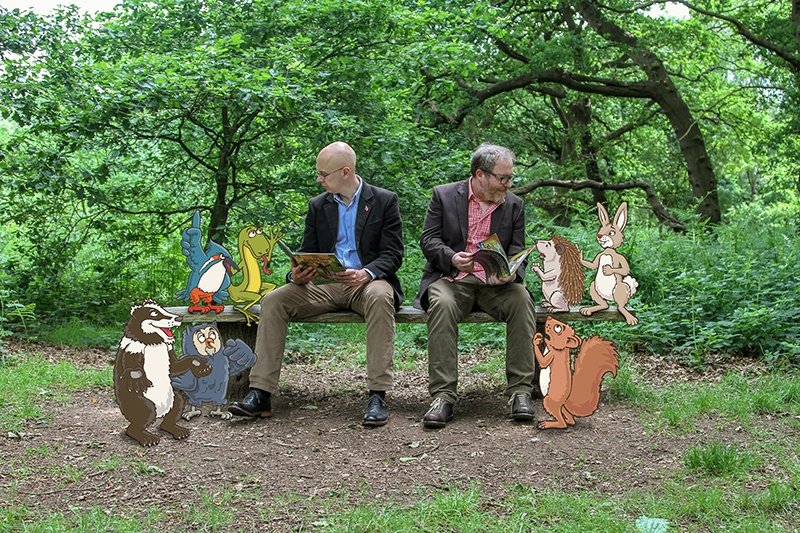 Nottinghamshire’s history and heritage will soon be very much in the spotlight once again, with numerous, reimagined Hollywood films featuring Robin Hood set for release in the coming months. Interestingly, to find similar content aimed specifically at a childhood audience, we must look as far back as 1973 and Disney’s ‘Robin Hood’ – tantalising subtitled ‘the world’s best-loved legend’.

As a Nottingham-born ‘creative’ who’s worked in the local industry for over 30 years, often employed to promote the county and its assets, I’ve witnessed the ebb and flow of Nottinghamshire’s relationship with what the rest of the world undoubtedly recognise as, it’s most valuable asset.

I also love history, and totally buy in to the often-quoted belief that ‘knowing the past helps us better shape the future’. So, when designing a concept to call our own with my business partner of 14 years, Robin George, history, children’s literature, Robin Hood, time-travelling, and rhyme (just for good measure), were combined in a new series of illustrated history books for primary-aged children.

The first, scene-setting story of Robin hood’s Little Outlaws, sees seven animals wake a magical, 1000-year-old oak tree called Major. Stepping inside Major’s hollow trunk, the animals join hands and stand upon one of his glowing tree rings, to be magically transported back to the corresponding year (1,200 AD), to meet the legendary outlaw, Robin Hood. Inspired by Robin Hood’s story, they all become friends and call themselves Robin Hood’s Little Outlaws.

Fundamentally, creating a character from the Major Oak, sets this retelling of the legend apart, and creates a dynamic mechanism by which further, almost limitless stories can be told, in a similar vein to Mr Benn’s changing room. Major can take the Little Outlaws and the reader back to learn of any person, event, discovery or invention, from any period within the last 1,000 years and beyond. Employing the universally understood mechanism of identifying a tree’s age from its rings, also helps children to relate to the passage of time.

After sharing the idea and first story with others, it became necessary to prove the concept and especially that a more involving and sensitive theme could also be handled through extensive rhyme, so a second story, ‘Evacuees’, is already written, awaiting illustration. Taking the reader back to 1940, it follows brother and sister, Billy and Joan, evacuated from London to the Welsh countryside as part of Operation Pied Piper, during The Blitz. A third story is also underway, seeing a further leap, as ‘Race to the Moon’ celebrates the 50th anniversary of the moon landings in 2019.

Ensuring that the books have a contemporary relevance, each will include interactive features utilizing the free augmented reality app, LAYAR.Readers scan the covers using a smartphone or tablet to see it come to life.

For some children, simply picking up a book is the hardest barrier to overcome. Being able to interact with it using the technology they love, is in stark contrast to anything they’re likely to have seen before.

The first book has been given a big thumbs-up after testing with primary schools, and approval by Inspire: Culture, Learning and Libraries, who have acquired copies for their Education Library Service and Public Libraries.

So, what’s next for Robin Hood’s Little Outlaws? Our 26th October at Waterstones Nottingham where you’re invited to meet the characters, hear passages read from the first book, and see an exclusive reveal of the cover designs and augmented reality features of books two and three!

Sign up at Waterstones NG to pop along to meet us, or visit www.robinhoodslittleoutlaws.com to find out more and keep up to date with developments.