Rise Of The Angry Robot

“Only about three of our books actually have a spaceship on the cover,” says Marc Gascoigne, founder and boss of Angry Robot, blowing away any lingering doubts I may have about that particular genre. “But whatever’s on them, our covers are always carefully designed, with a great deal of thought in them.” He’s not wrong: in front of me are two of their latest releases, each with vastly different, absolutely beautiful cover art that are as far from the clichéd 1950’s rockets and goldfish bowl helmet wearing astronauts zapping laser guns as you could imagine. If your perception of sci-fi writing still assumes such tropes exist, then Angry Robot is a fine starting point to pressure-wash your preconceptions.

But who are Angry Robot? Well, chances are you’ve walked past their offices frequently without being aware you’re ambling past one of the most innovative, most successful indie publishers in the UK. Situated on the first floor of a rather anonymous building opposite the hulking corrugated Nottingham Contemporary, they quietly get on with putting out crazily successful titles that not only stretch the confines of genre, but do so in a way that should make us proud to have them here.

As with many success stories in our city, the roots of Angry Robot lie in Games Workshop, that now venerable global institution that revolutionised game playing, bringing some brilliant punkish irreverence to fantasy and sci-fi, sticking a Mohican on Tolkien and a safety pin through Isaac Asimov’s nose. Marc started working on games like Bloodbowl, the insanely bloody and compulsively entertaining tabletop game beloved of this writer, and millions others the world over. A lifelong fantasy fan, he also oversaw the Fighting Fantasy book series, that innovative series of choose-your-path books that seamlessly blended books and gaming, getting books into reluctant reader’s hands almost by stealth. A decade helming Game Workshop’s Black Library publishing arm followed, before he left to set up his own publishing imprint in 2009.

Funded with start-up capital from HarperCollins, but aware of the rapidly changing market for printed books, Marc knew that he had to provide something different to stand out. “The sci-fi genre has built-in sustainability: its fans usually stay fans all their life. But we had to make sure we kept close to the base, and be very much part of it”.

The energy and enthusiasm of Indie music labels proved inspiration, as did much-missed legendary Nottingham record store Selectadisc. “Nottingham does this well: passion mixed with a strong fanbase.” In that indie spirit, Angry Robot set out to break rules while still appealing to committed enthusiasts. Simple tweaks, such as putting the logo on the front cover, mix with fan-friendly whimsy such as having their own theme song (I listened to one version of this – there are several – and my toes duly tapped), or putting “Easter eggs” into their books, which encourage people to pick them up ‘to find out what madness we’re up to now”. Even the name could easily be an Eighties Indie record label, a web comic or a skateboard brand: “We could just as easily have been called ‘Ninja Monkey’,” smiles Marc. “Something catchy was essential.”

They don’t just understand their fanbase, they are their fanbase. Marc and his team evidently enjoy the field they work in, and as such are deeply immersed and perceptive of change. Their social media feeds are a joy to behold, and their attitude to aspiring writers refreshingly open. They regularly open up submissions to unagented wannabe writers, a move that would turn many other publishers into gibbering wrecks. And they pour in: when I visit, they are receiving entries running into the high hundreds. Every synopsis will be read, and carefully considered. Such an innovation reaps rewards: as well as breaking down traditional barriers between reader and publisher, books discovered this way have gone onto great success, even being optioned for film and TV. “We’ve seen writers go from the slush pile to Michael Bay.”

Their deep affinity with their audience is matched by the long list of nominations and awards that they’ve picked up over the years, a few of which are proudly displayed in their office (quite a sight too: when it comes to designing sci-fi and fantasy awards, an engraved brass cup won’t suffice). The prestigious Hugo, Philip K Dick and Arthur C Clarke Awards have all found their way to Angry Robot’s canon of writers. 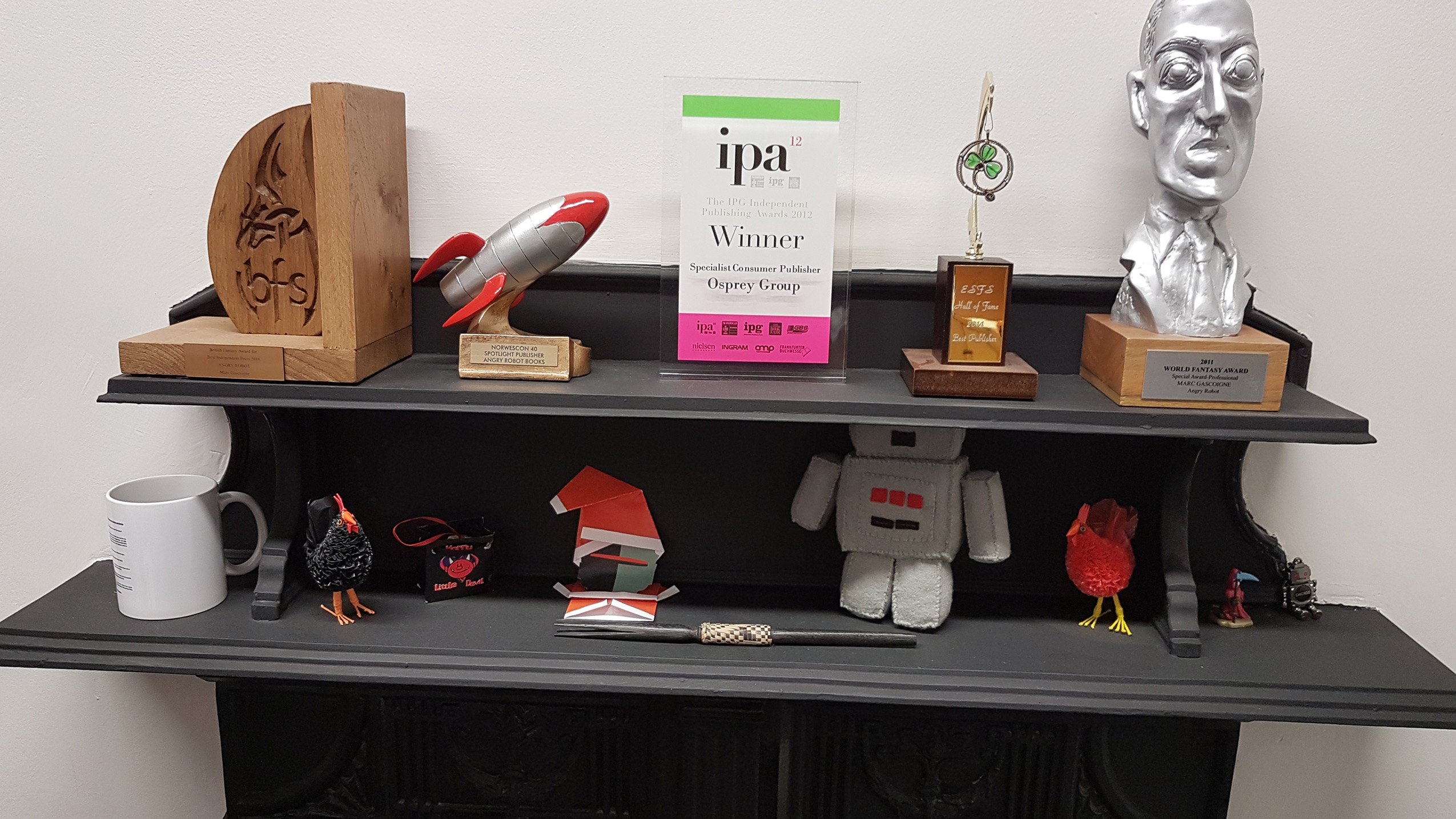 Their commercial acumen matches this critical acclaim. Their sales are impressive, releasing two or three titles a month that can be expected to sell between 10-50 thousand copies – and often waaay more – and across a range of platforms: physical books, ebooks and audiobooks. They have strong distribution systems in place, notably in partnership with Penguin Random House, ensuring that new titles can be simultaneously released around the world, and a nuanced knowledge of the market. “If it snows in the USA, we know we’ll see a surge in ebook sales as people download something to keep them company when they’re stuck inside,” Marc explains. 80% of their sales are currently in the USA and Canada, where fantasy and sci-fi have very much moved from the margins to the mainstream thanks to TV and films such as Game of Thrones and Lord of the Rings’. “These days” says Marc, with an amused gleam in his eyes, “everyone knows what an orc is”.

There are still some in literary circles who can get sniffy at the thought of genre fiction, particularly sci-fi and fantasy. Yet they are missing out on perhaps the most diverse area of fiction right now: the writers and readers are increasingly female, global, younger and find that the notion of what constitutes their genre is always up for subversion, destruction and recreation. With writers such as Margaret Atwood, David Mitchell and Kazuo Ishiguro effortlessly blending sci-fi into their wildly successful releases, it’s time to reassess your prejudices. “Sci-fi reflects the present while predicting the future,” Marc tells me, and it’s clear that right here in the centre of Nottingham, Angry Robot are going to be very much part of that future, spaceships or no. 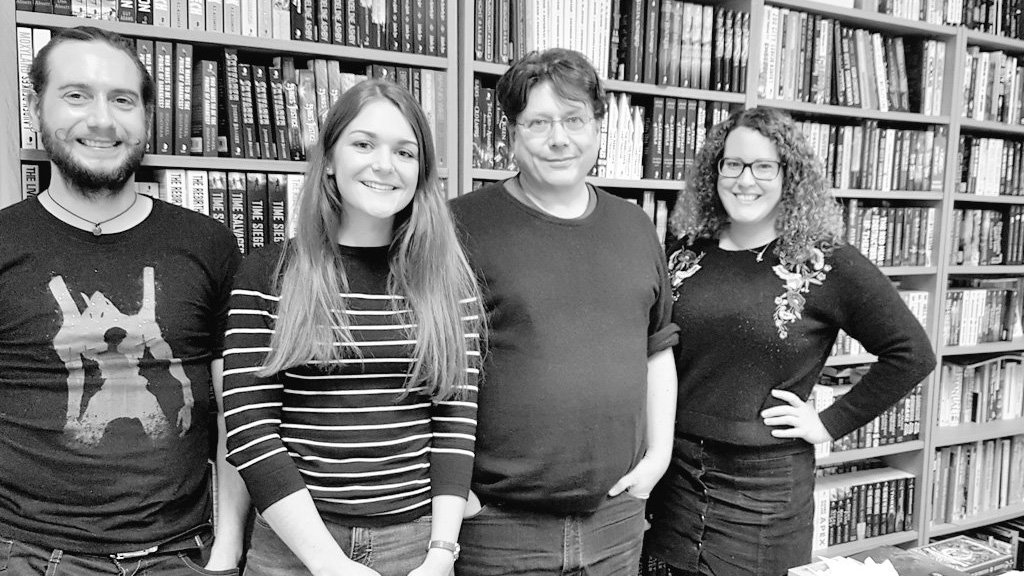