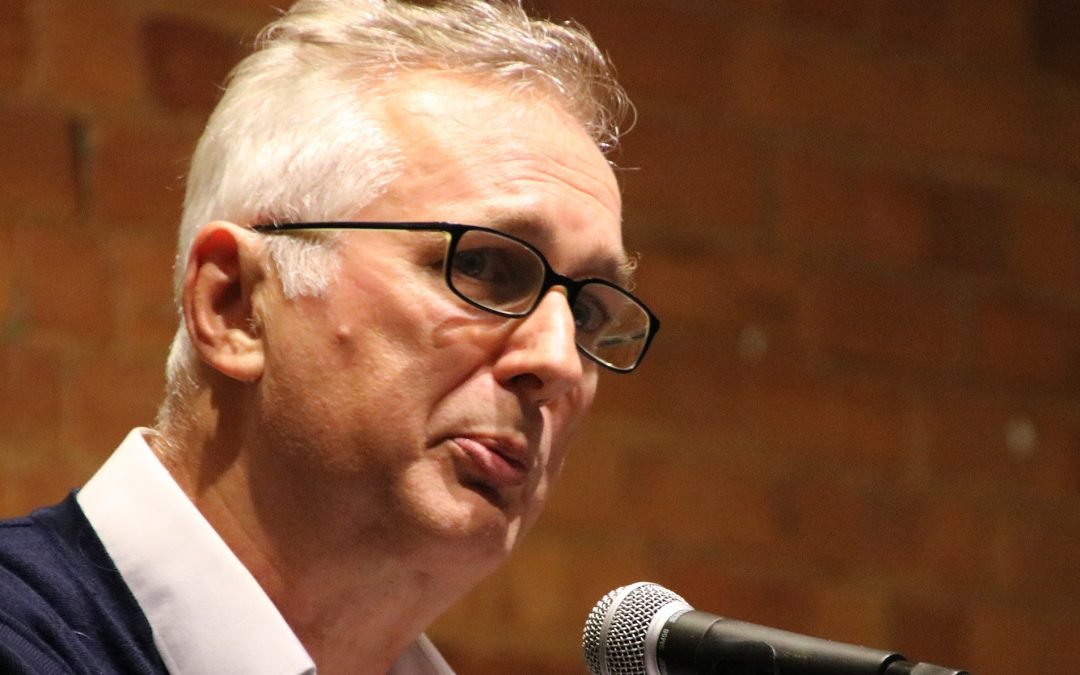 A packed Sillitoe Room at Waterstones welcomed the award-winning producer and poet, Henry Normal, for the launch of his new collection of poems, Raining Upwards.

From TV shows like The Royal Family, to films such as Philomena, Henry has played his part in making us laugh and cry, and emotions are at the heart of his new poetry. He believes that his poems should mean something. For him, it’s the communication of emotion, if to first explain them to himself.

Henry was born in St Anne’s, close to Sneinton, about where the new Lidl now operates. At William Sharp school he studied the poetry of Henry Kirke White, a Nottingham born poet that died in 1806, aged just 21. Early literary leanings took young Henry to Sisson and Parker’s bookshop on Wheeler Gate, in search of a job; only to have his hopes scuppered when answering honestly to the question ‘do you like football?’ They took his being a keen Forest fan as enough to make him unsuitable for the position.

Following in the tradition of some of Nottingham’s greats – Byron, Sillitoe and Lawrence – Henry “f**ked off South”  but remains proud to be from our city, and is a founder of the Nottingham Poetry Festival.

Engaging and entertaining, Wednesday’s launch was the world premiere for many of his new collection, as the poems made their debuts in front of an audience. Acting as his own warm-up comic, his first poem was a series of one-liners, of the jocular variety, and the laughs were abundant.

Raining Upwards was then revealed, with Henry reading various new poems, exploring science, nature and humanity. The overall mood was one of fun, celebratory even, but there were times when Henry was visibly and audibly moved. The expression of emotion that Henry so wanted his poetry to achieve was certainly present, and felt by an audience that were involved throughout.

Each poem was preceded by an introduction, with the inspiration behind them explained. The triggers included an old Russian saying, fatherhood, and liars, but science provided his greatest source. Henry is a fan of science-documentaries, such as those hosted by Brian Cox, whom Henry describes as being like a “clever Benny from Crossroads”.

Nottingham, if indirectly, also made an appearance. After commenting upon our bid to become the European Capital of Culture for 2023, Henry read a trilogy of limericks about Milton Keyes, a competing city. Disparaging of MK, the amusing limericks showed off Henry’s gift for a gag. He might not be a fan of the concrete cows of Milton Keynes but he loves his nature and misses our greenery, especially our trees.

If quantity matters then that must count for good value (as Henry pointed out, William Shakespeare only wrote 158 poems)

Raining Upwards is a book that can be dipped into for instant gratification. Ranging from ditties (“busy man’s sonnets”) to lengthier pieces, it contains 112 poems. If quantity matters then that must count for good value (as Henry pointed out, William Shakespeare only wrote 158 poems). More importantly, the quality is impressive. One poem, about the birth of a child, was a real breath-catcher.

This is Henry Normal’s third recent collection and he hopes he’s getting better with each. If the launch is anything to go on, he certainly managed, through his poetry, to deliver the emotion he so wanted to portray. The feelings flooded across the room.

Henry has a BAFTA, an honorary Doctorate of Letters from NTU and a Castle Rock beer named after him. Now, how about a blue plaque on the side of Lidl? Perhaps there’ll be one there by the time he’s back in Nottingham, on Tuesday 12th of December. Henry’s appearing at the Lakeside’s Djanogly Theatre, for an evening exploring the absurdness of love, romance and sex through stories, jokes and poetry. A date for your diary.