Poetry for the Mind 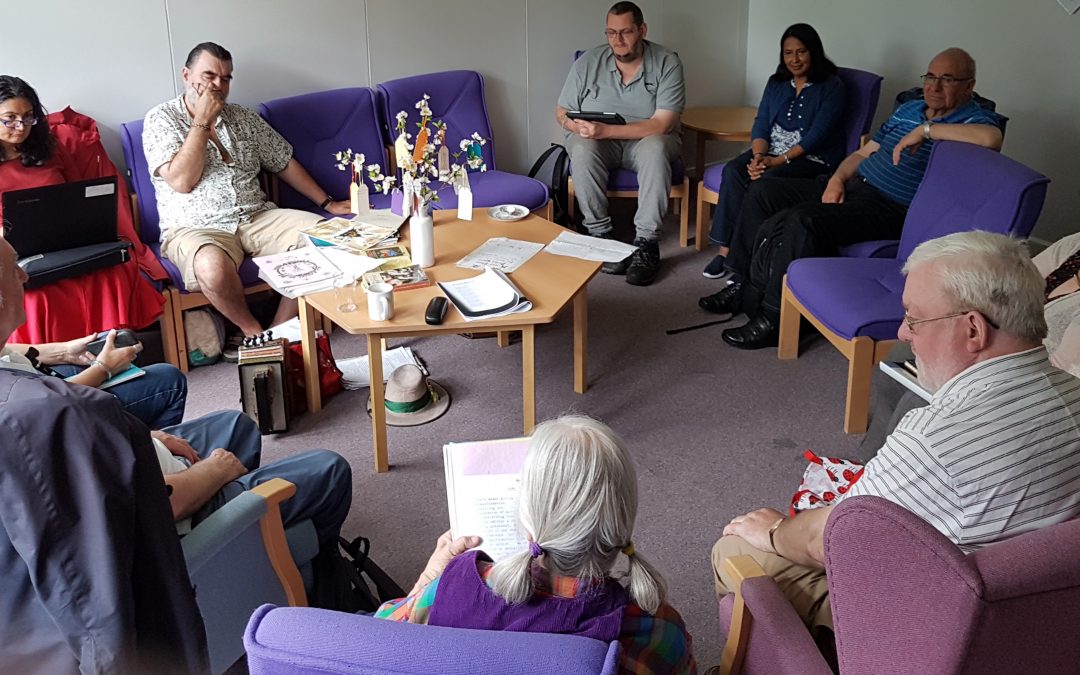 Middle Street Resource Centre is an inconspicuous building. Long a feature of Beeston, its unassuming structure belies the vibrant creative activity within. The charity, Mindset, runs from here, lending support to those with mental health issues, and the socially excluded. It has been an invaluable asset for Beeston and surrounding areas, signposting and providing activities for those looking for them. The filmmaker Shane Meadows has run exclusive fundraisers at the centre, and it has gained plaudits from all quarters of the East Midlands, as well as from further afield.

There are a multitude of courses here for people to participate in, from music appreciation to carpentry. A beautiful, meticulously-tended vegetable garden is a testament to the work done by the volunteers who have made it their own. We at Nottingham City of Literature are here for a less green-fingered reason, though: to meet an inspiring poetry group that has just put out their first anthology.

The Middle Street Poetry Group was co-founded in 2014 by Steve Plowright, a local poet, songwriter, and craftsman who has been dealing with acute mental health issues for decades. Around the time of the millennium, he set his poetry down in a self-published anthology, Bi-Polar Rhythms: a raw, often terrifying look into his own chaotic head. The book is a visceral read, and it would be easy to assume that the writing process behind it must have been painful. Yet Steve also found that it had a remarkably therapeutic effect. As one of the group participants later comments [of writing poetry], “It gets my thoughts out of my head, and onto paper.”

However, the purpose of the group is not merely to provide catharsis. “It’s good fun,” Steve explains, as he sets up for the session. “People have to enjoy it.”

The group-members gather, some clutching their own poetry, some with other’s work. They form a circle, and with no real prompt, start to share poetry. Tom has brought along four poems, each one exquisitely crafted tales of his life – of alcohol and breakdown. The group listen intently. They discuss the poems afterwards, opening up to each other and exploring the meaning behind the lines. It would be too simplistic to label this ‘talking therapy’; it is spontaneous discussion, with any therapeutic aspect merely a helpful by-product.

A cheerful older gentleman named Dennis tells me that he has only just started reading and writing poetry, at age 74. “I’ve always liked reading, just never poetry.” Has the group converted him? “Oh, yes. It’s my hobby now.”

Ray, a young man with his poetry in pixel form, ready to be read off his tablet, tells me how the sessions have boosted his social confidence; first encouraging him to read aloud to the group, and then to the general public.

It’s also an educational experience. In the previous week’s session, the chosen topic was the First World War. While the usual Sassoon and Wilfred Owen poetry was read, so too was that of the often-overlooked Irish war poets. Notable among these was Francis Ledwidge.

“I’ll go home and google poets and poems we talk about,” one member told me, “and then find something else, then something else. It’s constant learning in a subject I never thought I’d be interested in.”

Another member, Yasmin, found the session on war challenging but ultimately effective: “I like nice things,” she explains. “War, and talking about war – it’s horrible, horrible. But when I went home and my mind had thought through what we’d talked about, I felt a wave of emotion and empathy, which I’d have never been able to face before this. It had a huge impact on me.”

Nick brings in lyrics that he judges are more poetry, with a particular love of Bob Dylan and Leonard Cohen. “So much can be poetry,” he tells the group.

Earlier this year, Steve realised they’d produced enough good poetry to justify putting together a collection, and thus Journeys Through the Mind came to be. A diverse and fascinating volume, beautifully illustrated, they’ve sold most of their initial run of 100 copies and are considering printing more. For most of the contributors, it’s their first time in print.

Poetry has proven to be a force for good with the group. They relish playing off each other, developing each other’s work, interacting and inspiring. Their weekly Monday meetings are looked forward to; they lend a crucial structure to the group, and provide motivation for the participants.

“I get excited on a Sunday and re-read my poetry,” one of them explains. “I want it to be just right.”

The group are now hoping to take their book on tour, and perform in public places. If you know of a good venue, or a similar group to collaborate with, please get in touch with us via the Contact Us page.