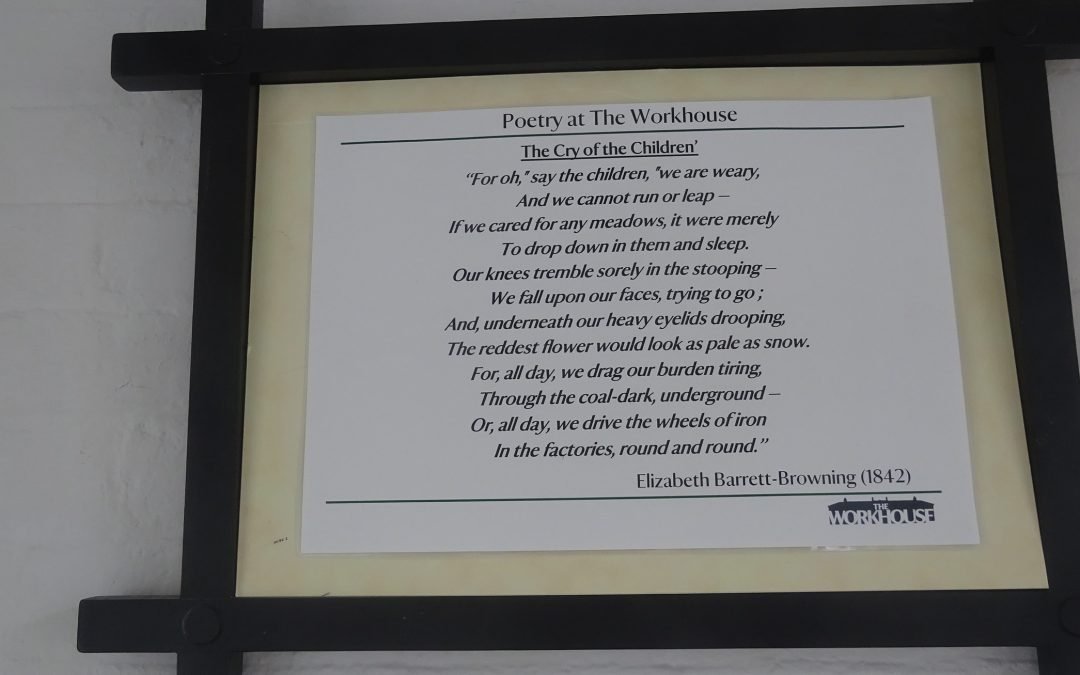 The Workhouse at Southwell has been home to a range of poetry recently, coinciding with poetry events in Southwell and other Nottinghamshire libraries.

The Workhouse is an atmospheric place, speaking of the lives of the poor and lost, and the National Trust and its volunteers run many events that bring this history to life. For this event, poems are displayed on washing lines, stairways, pillows, a mangle in the laundry, walls and doors, and hidden in the productive vegetable garden.

Poems have been cleverly themed, so that Dylan Thomas’s ‘Do Not Go Gentle into that Good Night’ hangs in the elderly women’s dormitory, ‘The Pauper’s Funeral’ by Robert Southey near the dead room, and the Lambs’ ‘Cleanliness’ in the wash house. This last room was where paupers entering The Workhouse would be washed and fumigated – part of the conditions of receiving help.

Visiting The Workhouse at any time is a different experience to what people might expect of a National Trust property. It is the history of the poor, and of social welfare, often forgotten. There are few records, as this is not the type of history that has always been valued. Paupers were judged by their “betters”, and sorted and segregated as to whether they were deserving or not. The building itself reflects that segregation, with each category – able-bodied (or idle and profligate), and elderly and infirm (or blameless) – having their separate accommodation. Men and women were ruthlessly separated, families split up, and this was all overseen by the master from his rooms at the centre. Architecture reflects social control.

There are poems from the era of the building – it was built in 1824, but used throughout the 19th century, and there were still residents up to 1970 – but earlier and later periods are represented as well. John Donne’s ‘No Man is an Island’, with the famous lines ‘And therefore never send to know for whom the bell tolls; / It tolls for thee’ emphasises that humans will never thrive alone, but are part of a greater whole. And Maya Angelou’s poem ‘Human Family’ tells us that we are all human, and more alike than different from each other. Two poems from different times and cultures, but with powerfully similar messages.

Many visitors to The Workhouse are prompted to think about the 19th century welfare system, and whether our attitudes have changed that much today. There is still a stigma in being poor, and tabloid newspapers have headlines about “benefit scroungers”. The Bertolt Brecht poem ‘Questions from a Worker Who Reads’ points out the gap in history between the powerful and those who have no say in their destiny.

Especially poignant is John Clare’s ‘I Am’, displayed on the walk from the car park, where the forbidding workhouse building overshadows. Clare was a 19th century poet who spent his last 20 years in an asylum, and this poem expresses his longing for freedom, a feeling many workhouse residents may well have shared.