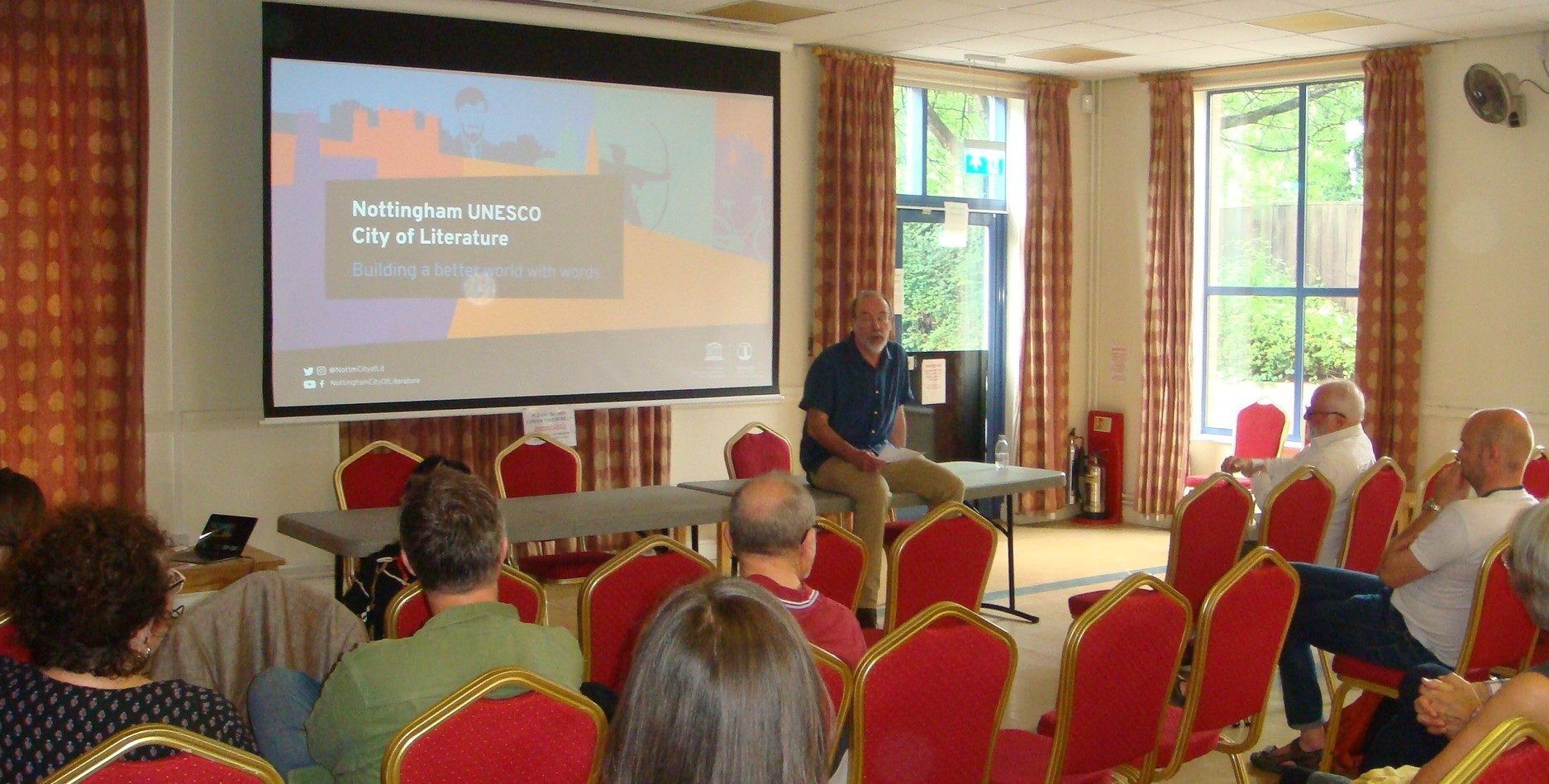 Last Saturday was Nottingham UNESCO City of Literature’s annual open meeting at the Mechanics, a chance for the team to report back to the city on what they’ve been doing for the past year and signal their future plans. It was also an opportunity for questions from the audience, all in the presence of the collaborative board. So what did you miss?

NUCoL shared their latest achievements with the collaborative board and general public, demonstrating what a productive year they’ve had. Chair of NUCoL David Belbin began the meeting by offering thanks, which included praise for Lowdham Book Festival recently celebrating its 20th year.

David then revealed that NUCoL’s core partners, Nottingham City Council, Nottingham Trent University and the University of Nottingham, have renewed their funding for a further three years. This, and the announcement that the Director Sandeep Mahal is now contracted until 2022, is great news. We were also told that Sandeep Mahal is working one day a week for Nottingham City Council on the new Central Library project and, along with Councillor Dave Trimble and leader of the city council, Cllr David Mellen, she has the ambition to establish the best children’s library in the country.

A call out was then made for a creative writer to join the NUCoL board of trustees. It’s seen as important that a writer embedded in the city should sit on the board, speaking on behalf of writers. Suitable writers who share NUCoL’s ambition to create an inclusive, diverse, sustainable organisation – and can give one day per month voluntary work and attend meetings – are encouraged to apply.

Director Sandeep Mahal opened her talk be expressing how “thrilled” she is to be able to continue her work and that there’s “so much more to do.” Sandeep then ran though some of the activities the organisation has been involved with this past year. Whilst this might only be the “tip of the iceberg” it showed the large number of projects NUCoL has helped shape. So, what have they been up to?

Several large youth and inclusion projects have been kickstarted. Sandeep began by telling us about Big City Reads. Part of this project included last week’s “deeply inspiring” Big City Readers’ Day at which four authors engaged with young readers. The project features four books that have been chosen, after much debate, by the city’s 14 Young Ambassadors: these secondary school children helped inform the design of Big City Reads, select the venues in which the books – 500 of each title – have been placed, and received all sorts of mentoring. It’s hoped Big City Reads will run again in 2021.

Eastwood Comics is a similar collaboration, with cultural heritage workers and graphic artists guiding schoolchildren in the production of six new comics, inspired by D H Lawrence and his writing.

A very different campaign was the Lost Words project, NUCoL helping to lead a successful crowdfunding effort to get Robert Macfarlane’s classic book of art, poetry and nature into schools across Notts.

Then there’s Nottwich, when 43 cultural leaders arrived in Nottingham as a spotlight shone on the literary sector. 25 best practices were presented, six new projects proposed and the delegates left with a favourable impression of Nottingham. The summit gained regional and national coverage. For three days BBC One’s East Midlands Today featured Nottingham’s literary heritage, writing scene, and its efforts to address literacy issues. Read On Nottingham, Nottingham’s Literacy Hub, was one of their highlighted community-driven campaign.

East Midlands Today also picked up on Nottingham being a city of poets, and this year has seen the publication of Our Voices are Our Verses, a poetry collection from four young Nottingham poets. Nottingham’s outgoing Young Poet Laureate Georgina Wilding is one of those poets, and she ended her YPL role as the Director of this year’s Nottingham Poetry Festival. Sandeep also mentioned the Facebook livestreaming event in which twelve women poets performed on world poetry day.

It was evident that partnerships have been key to the work of NUCoL. Nottingham beat off Leicester to work with Penguin Books on the Write Now scheme which discovered new and under-represented writers, and a partnership with Granada UNESCO City of Literature resulted in NUCoL becoming guest of honour at Granada Book Festival, a cultural exchange endeavour which will continue into next year.

The UNESCO cultural network is growing and shared communication and promotions are of benefit to all the cities of literature, with buddying schemes, an annual summer reading list, and a planned shared cities of literature website helping to raise Nottingham’s profile on an international stage

NUCoL is a catalyst for improvement in people’s lives and we learnt that 14-25-year olds are being prioritised. Many of the campaigns encompass a range of programmes and activities to equip children and young people with the literacy skills they need to succeed in life, and with this in mind there are many joined up initiatives and strategies planned for the future.

Plans for a two-day heritage learning symposium was also mentioned, as was a Stanley Middleton event, an aim to animate the city with poetry, and the 5th Nottingham Poetry Festival. After her talk Sandeep offered her thanks and the floor was opened up to the audience.

The point was made that Nottingham, unlike Norwich, does not adequately signpost the fact it’s a UNESCO City of Literature. In response it was noted that Norwich has been a city of literature for longer and that our council’s efforts in this area are a work in progress with the new central library expected to feature the UNESCO title.

In a similar vein it was asked how we can make more people aware of Nottingham’s designation. “Everything we do, we do in partnership,” explained Sandeep, with partnerships seen as a key way to boost the brand. It was also said that we are more interested in the young people of Nottingham becoming aware of our title.

The suggestion that we have a Children’s Laurate or Young Children’s Laureate was proposed, an idea that was well-received; and a cautionary point was made that we should remain careful not to become a tool for the three major stakeholders. In response to this the Head of Culture and Libraries at the City Council, Nigel Hawkins, confirmed that how money is spent is decided independently by the NUCoL board. It was also said that the funding model – with its three-way structure – is recognised by the Arts Council and adopted by other cities.

NUCoL successfully demonstrated their value to Nottingham, with evidence of strong leadership, place-based learning projects and community engagement, providing much inspiration and opportunity for all. In future, this annual reporting back should become a celebratory event as was suggested along with the offer of the Playhouse as next year’s host venue, perhaps with performances or readings included in the event. I hope this happens. The people of Nottingham should hear just how NUCoL is building a better world with words.