My Summer With Dorothy Part 1: Someone at a Distance 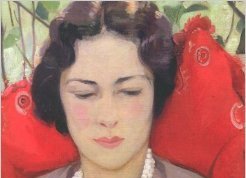 Originally published 65 years ago, Someone at a Distance was Whipple’s final full-length novel. It was less commercially successful than her other eight books, but acknowledged as perhaps her best written. Author Sarah Waters describes it as ‘A quiet masterpiece of a novel, poignant and beautifully observed.’

I devoured the 400-odd pages over the course of one weekend. It is not the type of novel you’d expected to be a page-turner. There are none of the tricks that commercial fiction writers today would use to keep the reader engaged: no snappy cut-aways, life-or-death situations, or unexpected twists. And yet I found myself engrossed.

The story itself is almost a cliché: a middle-aged, middle-class family host a beautiful young French au pair. The husband, Avery, has a bit of a mid-life crisis, with predictable results (it’s a little more complicated than that, but I don’t want to give away too much of the plot here). So far, so banal, you’d think. But somehow, in Whipple’s hands, this very commonplace story had me pinned to the page. How?

Whipple herself admitted ‘I don’t like having to concoct plots, I like doing people.’ and in Someone at a Distance, she certainly played to her strengths. The characterisation is wonderful. The decent, sensible, fading ‘English Rose’ wife, Ellen is juxtaposed with Louise, the seductive, lipsticked au pair. With a writer less deft, these two women would remain stereotypes. But Whipple creates multi-faceted characters that complicate the plot: Does Ellen’s naive unselfishness precipitate her husband’s lazy lapse in fidelity? Is Louise something of a victim – her apparent hard-faced vampishness borne out of bitter disappointment due to the snobbery and double standards of an ex-lover? Both women are very well observed, and carried me with them throughout the story.

Someone at a Distance was written 65 years ago by an author who was already 60 years old when it was published, so inevitably there are places where it feels dated. There is a touch of Enid Blyton about the descriptions of family life, and a hint of Elinor M Brent-Dyer (Chalet School books) in the depiction of the younger daughter Anne’s boarding school. And, whilst I acknowledge that presenting the ‘perfect’ family life was necessary for Whipple at the outset so that she could dissect it later in the novel, some of the writing does grate a little to a modern reader (for me, the dialogue felt a little stilted in places, and there were just a shade too many salt-of-the-earth working class ‘characters’ – but still, probably no worse than your average episode of ‘The Archers’…)

Although Someone at a Distance has bittersweet ending, I couldn’t help think that Whipple was writing with one eye on her readership, most of whom would be, like the protagonist Ellen, middle-aged and middle class. The story ends hopefully for Ellen, and rather dismally for her former au pair Louise (whom we suspect, although we’re not told, is soon to get her ultimate come-uppance). I found that towards the end of the book Louise became less real, and more of a classic femme fatale type, easy to blame for ‘throwing herself’ at someone – and thereby conveniently easier to forgive the one who was ‘thrown at’ for his transgressions. I thought it was a shame that Louise, who began the story clearly motivated, coming from a place of insecurity and hurt, ended up as not much more than a two-dimensional gold-digging harpy. There was scope to do more with Louise, and to explore more of what the two apparently very different women had in common. But Someone at a Distance is a book of its time, and had to appeal to readers of the day. However, I like to think that if Whipple were alive and writing today, she might be a little kinder to Louise, and less forgiving of Avery.

In short – Someone at a Distance: wonderful characterisation and descriptive prose in this page turning dissection of a post-war middle-class marriage.

Someone at a Distance is available from Persephone Books.