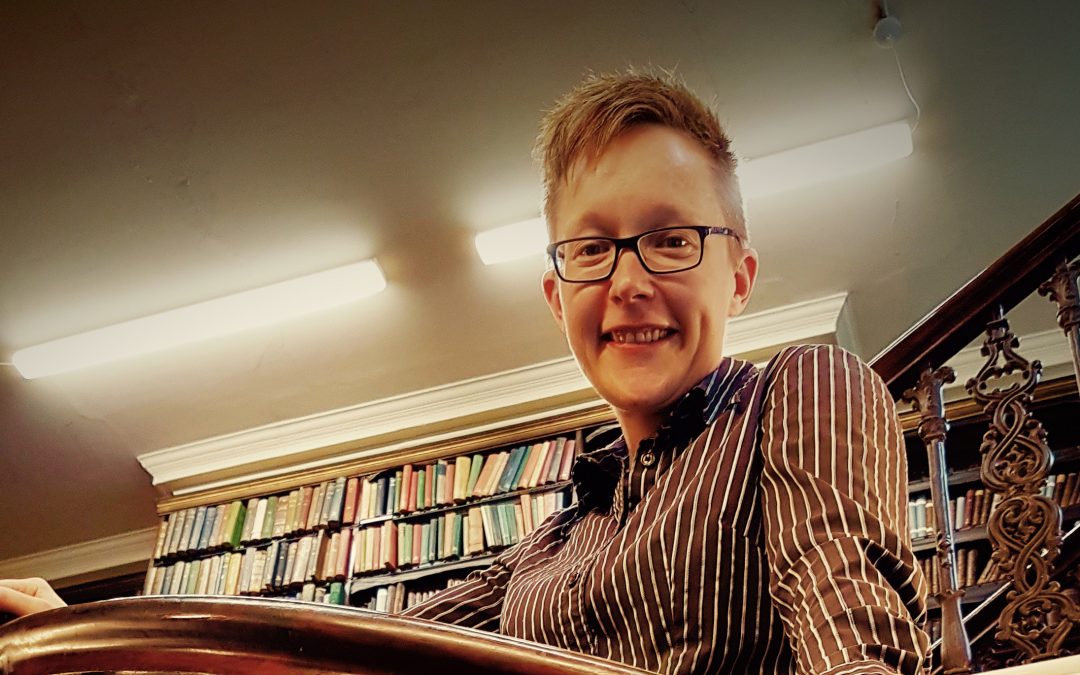 You’ve come over to Bromley House after a successful time managing Nottingham. Women’s Centre. What are your proudest moments of that tenure?

That’s a tough question – lots to choose from really! Obviously, the move to see misogynistic incidents classified as hate crimes locally is something I’m particularly proud of, and something I think the whole of Nottinghamshire should be very proud of. We were the first area to do this and it attracted national and international attention.

Another obvious one is the re-development of Nottingham Women’s Library on the top floor. This is a fabulous space and, as a result of the work we did, Nottingham Women’s Centre became the hub of the national Feminist Archives and Libraries Network for the UK.

What made you want to move over to Bromley House Library?

Well of course, when I saw the job advertised I thought ‘what a fantastic place to work!’. The beauty of the place, the heritage, the uniqueness was a huge attraction for me. I’m really interested in ‘community spaces’ – in all their different forms. The Women’s Centre was one type of community space, this is another. Obviously, they are very different in many ways but there are also similarities in terms of balancing many different (sometimes conflicting) needs. I like the challenge in negotiating that – and in always putting the needs of the user first.

It also interested me because I was brought up around books, with my late mother being very passionate about the power of words – a writer and poet.

How has your first month been?

Really interesting! It’s been great getting to know the staff, volunteers and members and to start to understand their hopes for the Library. Everyone has been really warm and welcoming to me.

I’ve also been getting to know the building and its little hidden cupboards and nooks and crannies. I think I’ve just about worked out where all the light switches are hidden now…

What surprises you most about the library?

I think the fact that it is so hidden from view in Nottingham – literally and figuratively speaking. Walking out of the back door of the Library into the quiet oasis of the garden – just off the Market Square. It’s hard to believe at times.

It’s a really interesting dynamic being a ‘hidden gem’ yet also wanting to increase access to the Library. You don’t want to lose that which makes it special but also you do want people to appreciate that it’s here and make use of it…

It’s a really interesting dynamic being a ‘hidden gem’ yet also wanting to increase access to the Library.

What plans do you have now Bromley House Library is in its third century?

The most important thing I need to do is ensure that we stay standing for another century! For starters, this means prioritising some urgent repairs on the roof. Historic England has been kind enough to give us a big boost with this as they’ve just announced they will be offering us some funding towards this. We also have plans to put in a lift and do some other bits of maintenance, all of which will require some further fundraising.

Aside from that, I think it’s about understanding what changes members would like to see and also what we need to do to ensure we continue to attract new members of the library and remain a key part of Nottingham’s literary fabric. I’m still very much in the listening phase at the moment.

Tell us about a great writer from Nottingham

Only one?! There are obviously some big names from the past that everyone will have heard of but also some great current writers that we shouldn’t overlook, like Nicola Monaghan and Megan Taylor .

One from the past that I didn’t know had a local connection until recently was Mary Howitt. Mary was a prolific author and wrote the famous poem ‘The Spider and the Fly’, which I think just about everyone remembers from their childhood. She was a member of Bromley House in the early 19th Century (along with her husband, William Howitt, also an author). There’s a bust of them outside Nottingham Castle.

What are you reading right now?