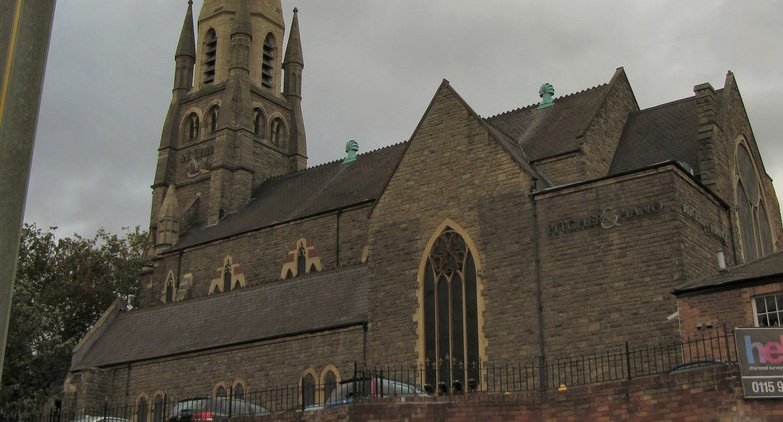 Before its various rebuilds, the Unitarian Church on High Pavement was affectionately referred to as ‘Little St. Mary’s’. Now better known as the Pitcher & Piano, the building has links with a number of our writers, including Byron, Lawrence, and the reformer Revd. George Walker (1734-1807), who was a minister of High Pavement Chapel for twenty-four years.

George Walker arrived in Nottingham as a respected mathematician who had recently become a Fellow of the Royal Society. Ordained in Durham, he became a minister on High Pavement (in the Lace Market) in 1774, the congregation having become Unitarian in the early to mid-18th century. Together with the scholar Gilbert Wakefield, with whom he shared an interest in literary matters, Walker ran a discussion group and a weekly literary club. Wakefield said of Walker that he possessed “the greatest variety of knowledge, with the most masculine understanding of any man I ever knew.”

Wanting to bring education to as many children as possible, Walker helped to form the Presbyterian High Pavement Charity School. Perhaps inspired by the first Sunday school in England – that had opened nearby in St. Mary’s Church (in 1751) – the High Pavement School began in 1788 as a “charity school for the children of poor persons”, and it was one of the first non-sectarian charity schools in the country. Manned by volunteers, the school offered a basic level of literacy as part of a full day’s education. The premises used by the school was built in 1758 (rebuilt 1846) and it was behind the chapel, on the cliff edge.

An annual charity sermon took place for the purpose of fundraising, and, in 1796, the ‘celebrity’ speaker was the little-known poet Samuel Taylor Coleridge (1772-1834). Before arriving in Nottingham, Coleridge had stopped off at Derby where he met with Erasmus Darwin. Coleridge was doing the rounds as part of his ‘Watchman’ tour, seeking subscribers for his poetry.

The radical Nottingham bookseller, John Sutton, is likely to have compiled Coleridge’s list of subscribers, about twelve hundred of them, with the chapel member and silk merchant John Fellows (or Fellowes) (1757-1823) collecting the subscriptions. Coleridge later wrote to Fellows, “The Ladies, who have honoured me by so delicate an act of liberality, will accept my sincerest acknowledgments. The Poems will be sent forthwith, directed to you & to be left at Mr. Sutton’s.”

It was probably at the High Pavement Chapel itself that Coleridge delivered his charity sermon. He described the audience as made up of “all sorts”. The names on his subscription list include members of the leading Whig families who controlled much of the town’s wealth. Many of the subscribers were politically active, including Walker’s daughter Lady Cayley.

Coleridge’s time in Nottingham coincided with a turbulent general election. Nottingham had a reputation as a centre for radicalism and Walker’s congregation was politically the most powerful and opinionated in Nottingham, with twelve of the town’s fifteen mayors worshipping there between 1775 and 1800, and Walker was to yield much influence, leading special sermons and drafting petitions. He was an early advocate for the abolition of the slave trade, an opponent of the war with America, a campaigner against religious tests in England, and an advocate for parliamentary reform. His ‘Appeal to the People of England’, in opposition to the Test and Corporation Act, was praised by the prominent statesman and champion of liberty, Charles James Fox.

As a highly distinguished pulpit orator, Walker’s sermons helped his chapel to attract many of Nottingham’s intellectuals and his dissenting voice travelled the county. His reform speech, at a meeting in Mansfield in 1782, led William Henry Cavendish Bentinck, 3rd Duke of Portland, to compare him with Cicero. The substance of Walker’s Mansfield speech is now available in a paperback booklet (2010, Gale ECCO, 20 pages).

Walker was a partner in Major John Cartwright’s cotton mill at Retford, known as ‘Revolution Mill’, and he looked after Cartwright’s business dealings in Nottingham. Cartwright (1740-1824), known as the ‘Father of Reform’, wrote one of the earliest works on reform in parliament, entitled ‘Take your Choice’, and he founded the Society for Constitutional Information, advocating universal male suffrage. Like Cartwright, Walker became a leading figure and he chaired the Associated Dissenters of Nottinghamshire, with an objective to repeal of the Test Acts (which meant that only people taking communion in the established Church of England were eligible for public employment). In his ‘Essays’, Walker wrote that, “it came to be in a considerable degree unsafe to express a difference of opinion from those who were attached to the measures of ministers.”

By 1790, opinion on the French Revolution and the Revolutionary and Napoleonic Wars was dividing the people of Nottingham into two hostile parties, the so-called ‘aristocrats’, who considered delegated authority, and not titles of nobility, as the only legal power, and the ‘democrats’, who submitted to the will of the King, nobility and clergy. Walker’s sympathies were with the democrats whose persuasive means and political pamphlets prompted much revengeful anger from their rivals.

In simply drafting a petition, calling for the end to the war with France, Walker had been accused of treason by ‘aristocrats’, whilst one man, for expressing the opinion that England should have its own revolution, had been imprisoned for three months.

With its population of around 25,000, Nottingham was a battleground, the year’s general election leading to violent disturbances, with windows smashed and stones thrown. After the police had been driven out of the Market Place, troops were sent in and an innocent bystander was shot dead.

In 1792, a letter was sent to the landlady of the democrat friendly Sun Inn on Pelham Street, threatening to burn down her house. Political rioting, and rioting in general, was commonplace in Nottingham. Many poor people were inspired by the revolutionaries in France and the town established the Nottingham Constitutional Society, dedicated to advancing the principles of liberty and equality. The reformer Thomas Hardy led a similar society in London and he visited Nottingham to offer his support. The Market Place saw an act of counter-revolutionary nationalism as a rival mob of conservatives burnt a straw effigy of Thomas Paine (1737-1809), author of ‘The Rights of Man’ (1791).

In response to the popularity of Paine’s book, and the growth of radicalism in Britain, the ‘Royal Proclamation Against Seditious Writings and Publications’ was issued by George III, limiting radical literature. It was in this dangerous era that Walker composed a petition for parliamentary reform, arguing that “the constitution of these Kingdoms has passed into the grossest abuses, so as to insult the common sense of the nation” and insisting on universal male suffrage. His petition was signed by 2,000 people in Nottingham and was presented to the House of Commons, only for it to be rejected as seditious.

1794 brought ‘The Duckings’ when ducking and pumping “became now the order of the day,” wrote Walker, “and those who live at a distance from Nottingham, will scarcely credit the relation, that such outrages were continued, under the nose of the Chief Magistrate, for upwards of four days; the unfortunate victims having no protection offered them, than being sent to gaol for their further personal security.”

A seven-storey mill belonging to Robert Denison, a member of the High Pavement Chapel, became a refuge for the democrats before it came under siege from a mob. Walker wrote that, “the windows of the mill were much demolished before young Denison remonstrated with the mob, and told them the consequence of further outrage. Those within the mill were at last, however, compelled to fire, to prevent the completion of the most horrid threats, not only against the mill, but against the lives of its protectors.”

Walker was critical of the local press whose continued attacks upon those who dared to maintain an independent opinion were making them targets. He wrote, “It is here seen that even Mr. Denison’s respectability (so well known to the inhabitants of Nottingham) could not protect him from popular outrage; because his conduct ran counter to the stream of popular prejudice.”

In his account of the duckings, Walker added, “This conduct was continued with unabating perseverance, and two countrymen, coming to complain of some outrage they had suffered from their neighbours, on account of their differing from them in political sentiment, were violently taken from the place where the county magistrates were sitting, and conducted to a pump, just at hand, where they were completely drenched, and suffered every other species of insult and indignity, which the wanton imagination of a mob could suggest.”

Of one altercation, Walker wrote that the “Mayor, apprised of the tumult, repaired to the spot, where he remained a tame and patient spectator of breaking windows, dragging the peaceable inhabitants from their houses, kicking, beating, rolling them in the mud, pumping upon them and ducking them…”

The following year ‘The Seditious Meetings Act 1795’ was approved by parliament. It was another gagging act, with a purpose to restrict the size of public meetings to fifty people. Walker rallied against these measures for the suppression of public opinion, which stated that any place where political meetings took place, with the purpose of discussing the injustice of any law, constitution, government and policy of the kingdoms, must be declared a house of disorder and punished.

Another violently contested election occurred in 1796 and, by the end of the century, Walker had left Nottingham, resigning in the May of 1798. It was in this month that the poet Lord Byron inherited his title and, by August, the boy Byron was in Nottingham where he became a regular visitor to the church (1798-99), just missing Walker’s time here.

George Walker ended his days in Manchester where, from 1804 until his death, he was the President of the Manchester Literary and Philosophical Society. His own writing includes many works published during his time in Nottingham, such as the treatises ‘Conic Sections’ and ‘On the Doctrine of the Sphere’, ‘A collection of Psalms and Hymns’, ‘Life’, ‘Essays’ and ‘Sermons’, with collections of his speeches and political addresses.

It was at the High Pavement Chapel (The Unitarian Church) that Paul comes across Miriam singing hymns towards the end of D. H. Lawrence’s ‘Sons and Lovers’ (1913). Paul approaches her after the service.

‘The large coloured windows glowed up in the night. The church was like a great lantern suspended. They went down Hollow Stone, and he took the car for the Bridges.

“You will just have supper with me,” he said; “then I’ll bring you back.”

(from ‘Sons and Lovers’)