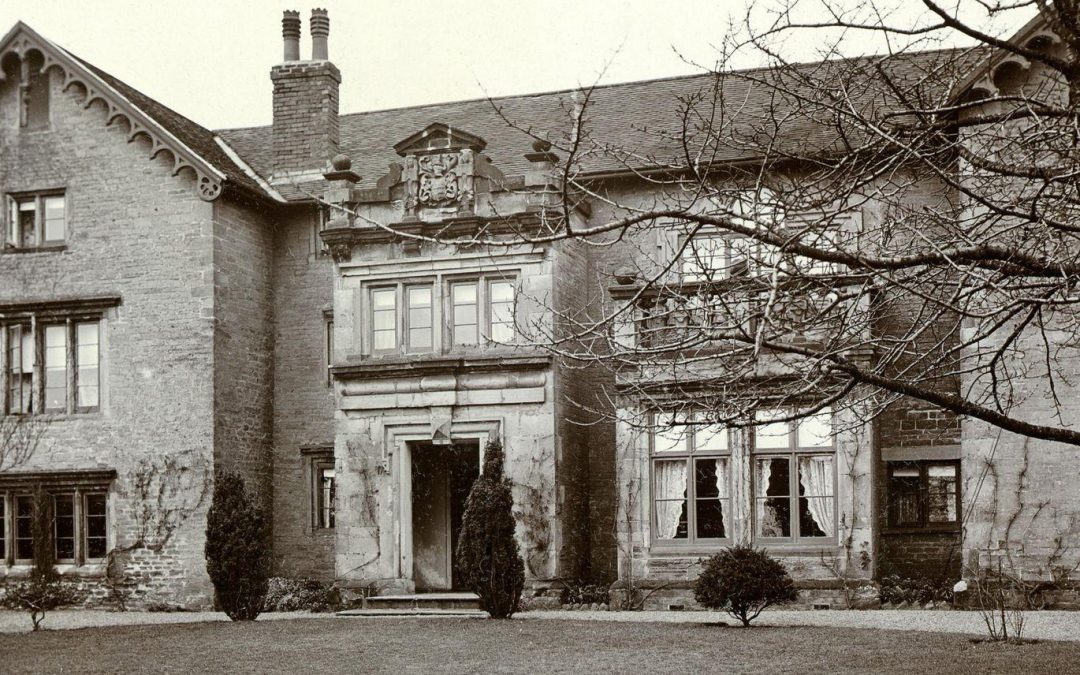 Broxtowe’s Edmund Helwys and his wife Margaret died in 1590, leaving behind five children. It was their teenage son, Askham-born Thomas Helwys, that then took over their lease of Broxtowe Hall. After he entered Gray’s Inn in London – a professional association for barristers – Helwys returned to the Hall where he settled, marrying Joan Ashmore in 1595. Their marriage caused some scandal, perhaps because Joan may have been his young ‘housekeeper’.

Helwys came into contact with Puritans in the north of the county, such as Richard Bernard, the vicar of Worksop, and John Smyth, from Sturton, and this seems to have changed his direction. And all was not well. Objecting to being told how to pray, they were demanding further reform of the Church of England.

By the century’s end, the laws further tightened, those wanting to attend the church of their own choosing were left with little option – conform or leave. Many bided their time but the new king turned out to be more conservative than they had hoped. In 1603, when King James made his stately rounds from Edinburgh to London, knighting people en route at Worksop and Newark, Helwys did not claim his right. Under King James it was still illegal to play games (or even run) on a Sunday; it was illegal for a priest not to wear a surplice; and illegal not to have your children christened. It was, however, legal to abuse others for their religious practices.

A conference was held in 1606 at which it was claimed that the best option was to move to the Netherlands, a place where all Protestants had been free to worship on their own premises, with no magistrate holding authority in matters of faith. Returning from the conference, Smyth fell ill and sought refuge, probably at Basford, where Helwys had now moved. He also preached, illegally, at the church in Basford where his friend Rev. John Herring was minister. By this time, Smyth had renounced his ordination and organised a new congregation at Gainsborough, which attracted supporters as far as Basford and Broxtowe, including Helwys.

In 1607, The High Court of Ecclesiastical Commission for the Province of York took active proceedings against members of the Gainsborough and Scrooby congregations. Local clergy were removed from office and Joan Helwys was arrested for refusing to take an oath according to law. After she declined to answer their questions, she was sent to York Castle.

Helwys had seen enough. The only lay leader in a group of rebels, he developed a Nottinghamshire network of some of the most religious radicals in England, and, facing further arrests, they prepared for action. He realised that life in England was becoming impossible and preparation for the Netherlands was made. After a failed attempt to escape via Boston, Helwys provided the funds for another escape via Gainsborough and Stallingborough, although he and his wife were briefly arrested after being caught on the shore.

After helping to fund Smyth’s move, Helwys joined the radical theologian and others at their Amsterdam premises. English authorities only allowed emigration by licence and so Broxtowe Hall was seized.

Influenced by the Mennonites in Amsterdam, Helwys and Smyth became the first two Baptists. Smyth baptised himself before baptising his friend. Helwys split from Smyth around 1610 when Smyth decided to join the fellowship of Waterlander Mennonites.

It was in Amsterdam that Helwys wrote one of the earliest English Baptist documents, ‘A Short Declaration of the Mystery of Iniquity’. Split into four books it was a plea for religious liberty, in which Helwys argued that the State should have no control over religious faith, developing the view expressed by Smyth that magistrates should not be involved in matters of conscience. Helwys’s writing called for complete liberty of conscience in matters of religion for all people. He argued for the same rights for all faiths, and that any relationship with God should be both personal and voluntary.

His next act was one of huge bravery. For Helwys had not only decided to publish his radical work, he was returning to England with his new denomination of General Baptists, and taking his radical ideas to the King. Helwys believed in the power of the written word and also that the King could bring about the necessary reform.

It was risky. Another former Gray’s Inn entrant, Henry Barrow, had previously been condemned to death for “publishing and dispersing seditious books”. Since then the Conventicle Bill had been amended but an offender still faced prison and, if later refusing to attend public worship, banishment.

Helwys and twelve Baptists returned to England in 1612 where he started the first Baptist Church on English soil, in Spitalfields, east London. Daring to challenge the King and State, a copy of Helwys’ book was delivered to his royal highness with a handwritten inscription.

The appeal to accord full liberty of conscience was dismissed and Helwys and other Baptists were thrown into Newgate Prison.

It was in prison that ‘Persecution for Religion Judg’d and Condemn’d’ (1616) was written, either by Helwys or his follower, the fellow General Baptist John Murton (1585-1626) who had been greatly influenced by Helwys. It was in prison, around 1615/16, that Helwys died, but his words would remain very much alive.

Aware of Helwys’s death and in fear of persecution, many of the group from Scrooby, who had settled in Leiden, joined the Mayflower Pilgrims and crossed the Atlantic in 1620 where they established new colonies. It was Roger Williams (1603-1683), the father of Providence, Rhode Island, that continued to promote Helwys’s arguments for tolerance. Williams married the daughter of Richard Bernard, the former Worksop vicar, himself an author of many books and a likely influence on Bunyan’s ‘The Pilgrims Progress’ (1678).

Three decades after Helwys’s death, Williams used much of Murton’s ‘An Humble Supplication to the King’s Majesty’ (1620) to develop his own defence of religious freedom, ‘The Bloody Tenant of Persecution’ (1644), which was a defence of Murton’s views (and a development of Helwys’).

Helwys’s proposal for the separation of state and religion eventually made its way into the first line of the American Constitution’s First Amendment, which reads: ‘Congress shall make no law respecting an establishment of religion, or prohibiting the free exercise thereof…’ and his call for tolerance and free will can be seen in Article 18 of the United Nations’ Universal Declaration of Human Rights:

1. Everyone shall have the right to freedom of thought, conscience and religion. This right shall include freedom to have or to adopt a religion or belief of his choice, and freedom, either individually or in community with others and in public or private, to manifest his religion or belief in worship, observance, practice and teaching.

2. No one shall be subject to coercion which would impair his freedom to have or to adopt a religion or belief of his choice.

The argument that there should be a separation of state and the church may not have been new but Helwys was the first to include all religions – or no religion – and to write the argument in such terms, including the point that anyone should be allowed to change religion. His courage and radical writing has made the world a better place.

In addition to the Helwys family memorial, St Martin’s Church in Bilborough houses two murals, painted in 1946 by the famous artist Evelyn Gibbs (1905-1991). Thought to have been destroyed, these were uncovered behind a false ceiling by an electrician during repairs in 2009. The paintings depict a Biblical scene set in Nottingham. Pauline Lucas, who wrote a biography of Evelyn Gibbs, was surprised and excited by news of their discovery.

Gibbs created the murals after coming to Nottingham during World War II. Staying here until 1960, she organised exhibitions and founded the Midland Group of Artists. She also taught at a school for handicapped children while writing an influential book on art, entitled, ‘The Teaching of Art in Schools’, a book illustrated by her pupils.

Lucy Hutchinson (1620-1681), best known for her ‘Memoirs of the Life of Colonel Hutchinson’, in praise of her husband, the roundhead governor of Nottingham during the English Civil War, wrote of Broxtowe Hall, which, during the war, was occupied as a garrison for Parliamentarians. Despite its position on the brow of a hill, the hall saw fighting and received considerable damage. Hutchinson tells of its setting for a story of romance and tragedy involving a gallant young Puritan commander, Captain Thornhaugh.

Broxtowe Hall was one of a number of country houses held by troops, another being the nearby mansion Aspley Wood Hall, which was held for the King by a member of the Willoughby family. A young Royalist and Papist, Agnes Willoughby, was returning home from Bilborough when she was jumped upon by three ruffians. On hearing her cries, Captain Thornhaugh came to her aid, shooting one of her attackers and sending the others running for cover. Anges and the Captain fell in love despite their religious and political differences. When Thornhaugh was fatally wounded, Agnes was heartbroken and vowed never to marry, devoting herself to prayer, fasting, and alms-giving.

Their tragic love story is also told of in Robert Mellors’ book, ‘In and About Nottinghamshire’ (1908).

The grounds of Broxtowe Hall offered walkers a labyrinth of lanes and beautiful woods. This all changed after the hall was demolished in 1937, its land becoming part of the new Broxtowe Estate. Named after Broxtowe Hall, the estate was built to accommodate families uprooted by slum clearances in the older areas of Nottingham such as Sneinton and Radford. As a seven-year-old, Derrick Buttress moved into a new red brick house on Frinton Road, one of the many new streets that radiated out from Denton Green.

Derrick Buttress wrote about growing up in Broxtowe in his first volume of autobiography, ‘Broxtowe Boy’ (2004), in which he describes his childhood during World War II; hearing bombs land in the distance and feeling the vibrations beneath his feet. By the time he moved to Broxtowe his parents had only just reunited having separated for a year, and their marriage was to be the other ‘war’ in the young lad’s life. His Mam, who lost her father and brother in World War I, responds to her husband being called up by asking, “How am I supposed to live on a soldier’s pay?”

With conflict all around him, young Buttress found some comfort in friends, films and Aspley Public Library’s junior library which, on first sight of, he “felt like yelling in joy”.

Like Buttress’s memoir, Nicola Monaghan’s award-winning novel, ‘The Killing Jar’ (2006), is a moving and at times amusing account of an impoverished life on the Broxtowe Estate where she lived. It’s an unflattering, at times shocking, portrayal of a council estate ruled by drugs and violence. This powerful debut novel follows Kerrie-Ann, born into a life of struggle who, by the age of ten, is selling drugs at school. Fiercely independent, she is an unforgettable character who narrates her story in an authentic Nottingham tongue.

From Helwys’s plea for tolerance, to a tragic love story amid the Civil War, childhood memories of World War II and the horror of life as a young dealer, Broxtowe has played its part in making Nottingham a city of literature.