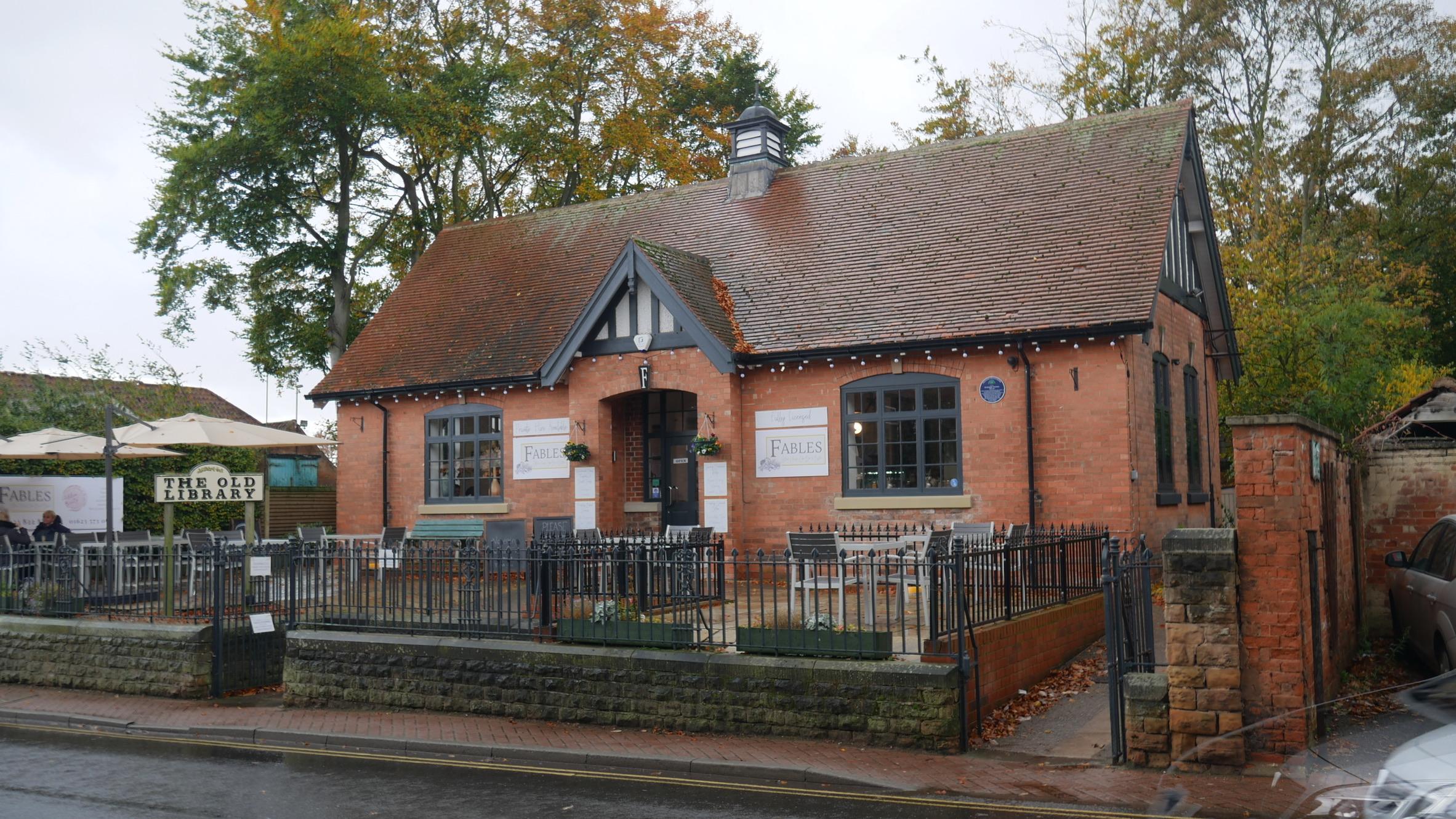 This week we visit the Old Library in Edwinstowe and celebrate Christopher Thomson.

Born in Hull on Christmas Day of 1799, Christopher Thomson was a strolling actor, artist and author, who helped his adopted Notts village to become a hive of literary activity.

His father was a Scottish sailor turned publican who subscribed to a circulating library, opening his son’s eyes to Milton, Shakespeare and others. In his teens, Thomson saw ‘King John’ at the theatre and began dreaming of becoming an actor. After following his father in working at sea, he returned to Hull and married Hannah Leaf. When work dried up he performed in a play but said, “its first effect was to starve me: what, then, was to be my next adventure?”

Enwrapped in his desire for the stage, that next adventure was to be the life of a strolling actor. His pregnant wife and young child joined him on his travels through Humberside, South Yorkshire, Derbyshire and Notts. Thomson and his various companies were struck by the different tastes found in adjoining villages and towns. Whilst one venue might have an utter contempt for everything associated with literature, its neighbouring population might display a love for it.

One thing these provincial towns did have in common was that their local theatres were mostly deserted which, for the Thomsons, meant a poverty-stricken existence. Thomson walked all the way to a Weekday Cross pawnbroker for a coat, accepted free milk from a Kimberley landlady, and he continued to act; in Long Eaton, Basford, Bulwell, Pleasley, Sutton in Ashfield, Calverton, Oxton, Arnold, Farnsfield, Blidworth and elsewhere, his group of players finding theatres in large barns or fitting them up as they went along, carrying props on their backs. Everywhere they walked involved a search for food and a place to stay. Their feet bled and their pockets were often as empty as their stomachs.

Early in 1828 Thomson moved to Edwinstowe, finding that “a small knot of the reading and inquiring class in this village were constant play-goers.” This contrasted with Warsop village which he found large and populous, with extremely ignorant inhabitants. To supplement his meagre income, Thomson sought work as a painter and his first grand job was painting a boarding school in Nottingham’s St Peter’s Gate. Thanks to the kindness of his new friends back in Edwinstowe – especially from the local shoemaker Reuben Trueman, a zealous advocate for the onward march of society – Thomson landed local work painting a house. Perhaps he could find a painting business here, he thought, in this village he was so taken with, where “the remains of the old forest of Sherwood were within bow-shot of my home.”

After settling in Edwinstowe, Thomson continued to paint and act but said, “I was not so comfortable on the stage as I had expected to be. My residence at Edwinstowe for a period of nearly three years had in some measure ruralised me.”

His wife’s ill health, a growing family and the presence of supportive friends, kept the Thomsons in Edwinstowe and eased his decision to leave the acting profession he loved. Now painting houses for a living, it was another of his passions that began to consume him, his long-held belief in self-education. “Ignorance is a living death,” he wrote, encouraged by the growing movement for accessible education. “In a few more years, the spread of Education and Science will break down the barriers that Bigotry, Prejudice, and Conventionalism have been studiously building up in years past.”

“It was my privilege,” he said, “soon after settling in this village, to make the acquaintance of two or three right thinking men and thus early we pledged ourselves mutually to endeavour to banish crime from the village, and if possible, restore it to virtue and freedom.”

Locals were seen to be spending their leisure time in the beer-house, favouring drunkenness over education, but in 1833 a few men set up a Lodge of Oddfellows. Thomson was unconvinced by the idea at first but, after visiting with his friend Trueman, he saw the benefits to his cause believing that, “happily, the working classes are now awakening to a sense of their own power!”

Edwinstowe’s the Birkland and Bilhagh Lodge, “raised the drooping spirit of the labourers,” said Thomson. The group met in local Inns but Thomson thought it better they had their own hall, something they achieved despite objection from the village publicans unhappy with the loss to business.

Thomson’s hope was to live to see education that’s universal and free. In the meantime, he was set on doing his bit for a movement that steadily “roused the sleepy mass to new action.” Over the next decade he assisted in the opening of 40-50 lodges, traveling miles to deliver addresses and lectures, promoting the lodges’ principles: the chance for the masses to socialise and receive education at the same time.

In 1836 Thomson encouraged a few subscribers to pay a penny a week for a reading room and two years later Edwinstowe had a library, part of the ‘Edwinstowe Artisans Library and Mutual Instruction Society’. Open to men, women and children, within six months they had 50 members. Events were held to raise funds and the library eventually amassed a collection of 500 volumes, from Shakespeare, Byron and Scott, to periodicals such as ‘Howitt’s Journal’.

Realising that many villagers were illiterate, Thomson set up night classes from October to March at the Jug and Glass Inn. Classes were free to all villagers, with members providing their own coal, candles and books. In addition to reading and writing, learners could gain instruction in arithmetic, music and drawing. There was also a conversation class, where any subject could be discussed. Using a blackboard and chalk it was Thomson who often taught this class which could attract up to 200 people.

A ‘committee of fun’ met in the Jug and Glass to make plans for the village feasts. Out of this came the ‘Gathering of the Foresters’ event of 1841, a literary celebration. The poet, Spencer T Hall, was the chief guest. A close friend of Thomson’s, Hall was known as the laureate of Sherwood Forest and he was presented with a carved oak walking stick as a tribute of respect for his literary worth. There were also tributes to the memory of Byron, Ben Johnson, Robert Dodsley, Pemberton de Wanderer and other departed writers, with a special proposal made to the immortal memory of Robert Millhouse, who wrote the poem ‘Sherwood Forest’.

Millhouse had known poverty all his life and been buried in an unmarked grave. In Hall’s address to the gatherers, he said, “I trust it will not be in the power of another generation to say, that the people of this day erected costly monuments to the wholesale butchers and robbers of humanity, while the peasantry of Sherwood Forest let the dead grass sigh over their sleeping bard, for want of a simple slab to guard his grave from the blast.”

Penny subscriptions were requested as, with permission of the Nottingham Cemetery Company, plans for a monument to Millhouse were underway. Hall added, “As one of his personal friends, one of his sincerest, too, when this object is carried out, I would beg of you one privilege, the melancholy but affectionate one of writing his epitaph.”

Loud cheers erupted and from those words the money was collected for a monument to be erected over Millhouse’s grave, complete with the epitaph:

‘When Trent shall flow no more and blossoms fail,

On Sherwood’s plains to scent the springtide gale,

When the lark’s lay shall lack its thrilling charm,

And song forget the Briton’s soul to warm;

Thy fame, O Bard, shall pass— but not till then—away.’

Many toasts followed Hall’s speech with more writers honoured. Among them were the names of William, Mary, Richard and Godfrey Howitt, Thomas Miller, John Bridgeford, Samuel Plumb, Sidney Giles, Ephraim Brown, E. G. Pickering, and the memory of Joanna Williams, writer of the 47-verse poem ‘Sherwood Forest’. The next guest speaker, Charles Plumbe, postmaster of Sutton-in-Ashfield, was then introduced as a man of refined intelligence and poetical ability. Edwinstowe was proud of its literary heritage and people walked from miles around to join the festivity.

The following year they held their second Sherwood Gathering, in honour of literature, science, art, and moral worth, all under a tent within sight of the majestic oaks of old Sherwood.

In 1847 Thomson wrote ‘The Autobiography of an Artisan’, published by J Shaw and Sons, Wheeler Gate. “What! a labouring man to think of writing books!” he wrote. “Shocking, truly! What next?”

The book was dedicated to “the artisans and labourers of England, fellow workmen in the holy cause of self-elevation, and to the friends of the industry of England, of whatever rank or station.” Written to benefit his fellow labourers, Thomson’s autobiography told of his life in poverty as a strolling actor, of his family, of which he had seven children (one was a poet and others were singers and musicians), the magic of Edwinstowe village, where “nowhere has that spirit [of Robin Hood] been more fondly nursed,” and of his role in educating the masses. “However great the evils they endure, a knowledge of the disease is half the cure,” he wrote, believing knowledge and understanding could lift people out of oppression.

As years passed, Thomson continued to support education and the power of the arts. His day-job led him to work on making improvements to Rufford Abbey, hired by the Earl of Scarborough, but, after his workload abated, the Thomsons left Edwinstowe and settled in Sheffield. After working as a newsagent, Thomson turned his attention to landscape art, adopting a successful career as a painter. As for Edwinstowe, it remained a place of inspiration for verse and prose, and drew Nottinghamshire’s fine network of writers from across the county, a remarkable circle that Spencer T Hall recalled in his works ‘The Sherwood Forester’ and ‘Sketches of Remarkable People’.

Hall’s writing and Thomson’s autobiography honour our great writers of the mid-19th Century, but it’s someone even closer to home that Thomson saves his greatest praise for, writing, “I have a most kind, indulgent, and industrious wife, and to her I owe my happiness.”

Edwinstowe’s night classes (and its library) moved to the ‘Old Library’ (built in 1913) where they continued in a similar fashion. There’s a blue plaque on the wall of the Old Library which reads:

Sailor, Comedian, Social Reformer, Artist, Author and advocate for the local Oddfellows. He contributed much to supporting the community of Edwinstowe, setting up a ‘Penny Library’, Night Classes and lectures, as well as ‘Self-Help’ groups from 1838-1849. This building (formerly the Old Library built 1913) followed in a similar tradition.