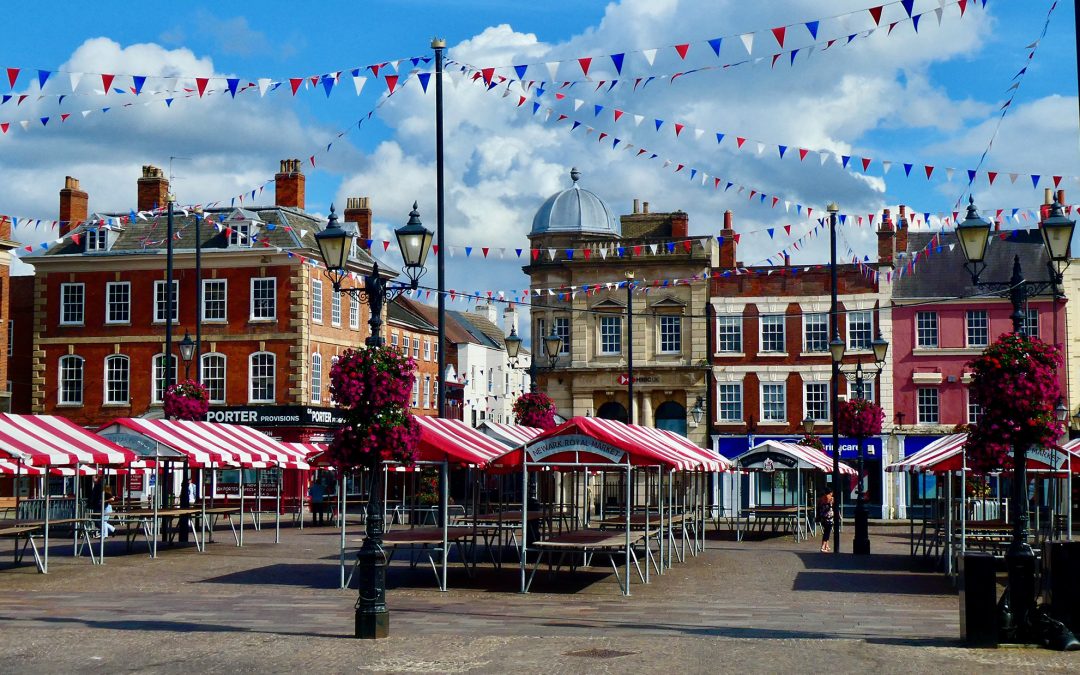 There’s a plaque on the outside of G.H. Porters on the corner of Market Place and Ridge Street that marks the spot where S. and J. Ridge of Newark (Ridge’s) printed the first volumes of Lord Byron’s poetry. Successive generations of the Ridge family were stationers, booksellers and printers. When the firm was founded, by Allin and Ridge, they set up Newark’s first circulating library circa 1775. But it’s for Byron’s volumes that they are most famed.

In 1806, with his mother living in Southwell, an eighteen-year-old Lord Byron took a collection of his poems to the firm of Newark printers. He had decided to have them published for private circulation. He stayed at The Clinton Arms across the Market Place, while his words were printed privately and anonymously

A proof copy was presented to Reverend J. T. Becher. Byron’s Anglican friend recommended that all issues be withdrawn immediately, the lines under the title ‘To Mary’ being unsuitably outspoken. His protest was written in verse. Byron had already removed a couple of poems at the final hour and, post publication, he quickly gave orders to destroy the whole impression. From that print-run of no more than 100 slender copies, four remain in existence.

‘Fugitive Pieces’ was peppered with errors and revealed information that could prove problematic for those named. The work was a product of Byron’s time in Southwell but whatever antics he could get away with in person, it seems he couldn’t in print. His references to certain young residents would have not been sufficiently veiled as to spare them scandal.

Byron’s second volume, ‘Poems on Various Occasions’, issued without ‘To Mary’, contained more poems and fewer misprints. It incorporated much of the first work and was once again published anonymously by Ridge’s. The collection was printed no later than the 13th of January 1807, with alterations made to limit any offence caused back in Southwell. When a further edition, ‘Hours of Idleness’, was published that same year, it was the first of Byron’s volumes offered for sale, the title page including the author’s name, “George Gordon, Lord Byron, a minor”.

The printing press on which Byron’s first volume was printed has been exhibited at Newark’s Millgate Museum. For more on Newark’s rich printing heritage read ‘Newark as a Publishing Town’ by T. M. Blagg.

When Byron would visit Newark and Ridge’s shop he would typically frequent The Clinton Arms, formerly known as The Kingston Arms. A plaque on its façade includes the words: ‘Lord Byron stayed in this building during 1806 and 1807 when two volumes of his poems were being printed in Newark.’

Back when it was The Kingston Arms, in 1771, the Newark Book Society was founded there, a group of well-to-do diners who would discuss and exchange books. The society survived nearly 100 years.

To the left of The Clinton Arms was The Saracen’s Head, another of our literary locations.

The Saracen’s Head closed in 1956 after a long and colourful history. The inn is mentioned by Sir Walter Scott in his historical novel, ‘The Heart of Midlothian’, written in 1817 and published a year later. It’s at The Saracen’s Head that the dairymaid Jeanie Deans stays during her journey from Edinburgh to London. Set in the 1730s, ‘The Heart of Midlothian’ is perhaps the finest of Scott’s hugely popular ‘Waverley’ novels.

It may now house a branch of WHSmith and Barclays but the building maintains a link to its past with a bust of a Saracen’s head above a plaque which states: ‘Licensed in the reign of Edward III. This is the 18th cent. building at which “Jeannie Deans” (“Heart of Midlothian”) by Scott stayed on her way to London about 1733. An important posting inn during coaching days.’

Jeanie’s name may be misspelt but the plaque is prominently positioned and The Saracen’s Head’s role in the novel is worthy of record as it receives more than a passing mention. The relevant section begins:

“At noon the hundred-armed Trent, and the blackened ruins of Newark Castle, demolished in the great civil war, lay before her.”

The prose continues with Jeanie Deans, after entering Newark, heading straight to The Saracen’s Head where a wench serving refreshment inquires if she’s not a Scotchwoman going to London upon justice business? Two women with Scottish accents had passed by that morning asking about her.

Walter Scott visited The Saracen’s Head several times and mentions the inn in his diary.

The Saracen’s Head and The Clinton Arms – with their plaques for Walter Scott and Lord Byron – sit side by side, and the two men were equally as well acquainted. When Scott read Byron’s Newark-printed ‘Hours of Idleness’, he thought the young poet had been treated unfairly by the critics, writing that, “Like all juvenile poetry,” it had been written, “rather from the recollection of what had pleased the author in others than what had been suggested by his own imagination; but, nevertheless, I thought they contained some passages of noble promise.”

Scott was already known as a poet when he published his first novel, ‘Waverley’, the forerunner of his successful series. His subsequent books were listed as being ‘by the author of Waverley’. A year after that debut, in 1815, Scott and Byron first met in John Murray’s drawing room. Byron had earlier satirised and criticised Scott and other contemporaries in his book ‘English Bards and Scotch Reviewers’, written when he was 20. Originally titled ‘British Bards’ Byron had Ridge’s set it up in type before deciding to enlarge its scope to include critics, satisfying his desire for revenge having been told by a critic to abandon poetry.

Byron was 27 when he met Walter Scott who was 16 years his senior and primed to meet a man of peculiar habits and a quick temper. Scott found Byron to be considerate and kind, though almost gloomy, and very animated when in conversation. They got on well and had lots to say to each other.

John Murray wrote that “After Scott and [Byron] had ended their conversation in the drawing room, it was a curious sight to see the two greatest poets of the age – both lame – stumping down-stairs side by side. They continued to meet in Albemarle Street every day, and remained together for two or three hours at a time.”

The men found much agreement, except upon the subjects of religion and politics. Scott was a Tory, Byron an anarchistic Whig. With such different ideologies and lifestyles, Scott and Byron may never have been destined to become close friends but they later corresponded in letters and exchanged gifts, Scott giving Byron a dagger mounted with gold, Byron responding by sending Scott a large vase full of Athenian men’s bones. Their letters show good wishes and mutual affection. Scott displaying concern for the young man whose talent he rated highly, and Byron maintaining a deep respect and appreciation for the older novelist whose Waverley novels he would reread.

It’s been claimed that Scott gave up writing poetry because he couldn’t match Byron’s success and, according to Roderick Speer in ‘Byron and Scott’ (2009), it’s due to Byron’s awe at Scott’s achievement with his Waverley novels that our poet put so much historical weight behind ‘Don Juan’. Nottingham Corporation also rated Scott’s book, naming the city centre’s Waverley Street in its honour.

Another bestselling writer, with a stronger connection to Newark than Scott or Byron, is Matt Haig.

Matt Haig spent most of his childhood in Newark and as a teenager in the 1980s and ‘90s it was a place he wanted to escape. Haig’s parents still live in Newark and his own feelings for the town have warmed. He has said, “The town I wanted to leave behind – and did leave behind – is now one I love to visit. It’s the town that made me, and I recognise myself in its crags and imperfections.”

Two venues a young Haig found refuge in were Newark’s library and its theatre. Newark Library was where Haig “experienced the magic paradox of books: that they were a place of escape and return.” He would spend a lot of time there, being taken to another world, where he could find himself. The library was a safe space, and as Haig recalled, “non-judgmental, where you were relatively unlikely to get into a fight or be laughed at because of your hair.”

Newark’s Palace Theatre – now 100 years old – was a five-minute walk from Matt Haig’s house and as a 15-year-old he spent a week there on work experience. During this time, the author remembers having to look after a donkey that was starring in a production of ‘Joseph and the Amazing Technicolor Dreamcoat’.

Haig’s second novel, ‘The Dead Fathers Club’, is a quirky update of Hamlet set in Newark. The eponymous club is made up of the ghosts of Dads in Newark. The ghosts meet near a pub most of them had frequented in life. The story is narrated by eleven-year-old Philip Noble whose pub landlord father has died in a road accident, and his mother is succumbing to the greasy charms of her dead husband’s brother, Uncle Alan. The remaining certainties of Philip’s life crumble away when his father’s ghost appears in the pub and declares that Uncle Alan murdered him.

Also set in Newark is Helena Pielichaty’s YA book, ‘Accidental Friends’ (2008), in which four 16-year-olds from different backgrounds meet in a broken-down lift at Hercules Clay College. The college is fictional but Hercules Clay existed. The 17th century town alderman lived in a house in the corner of the Market Place, destroyed by Cromwell’s Parliamentary forces. Fortunately for Clay and his family, he’d just moved them to the premises next door after dreaming three times that his house was on fire.

A plaque tells the story:

‘Here stood the house of Ald. Hercules Clay. Destroyed March 11th 1643 during the second siege of Newark by a bomb aimed at the Governor’s Residence. The Alderman thrice dreamed of the destruction of his home, and consequently removed his family to a place of safety. As a thankoffering he bequeathed a legacy in perpetuity to benefit his poorer townsmen.’

Newark hosts an annual book festival, appropriately titled Newark Book Festival. It was founded in 2017 by Sara Bullimore who took the project on from Books in the Castle. This year’s festival was held online.

If they’d had the internet in Byron’s day he’d have been all over it.