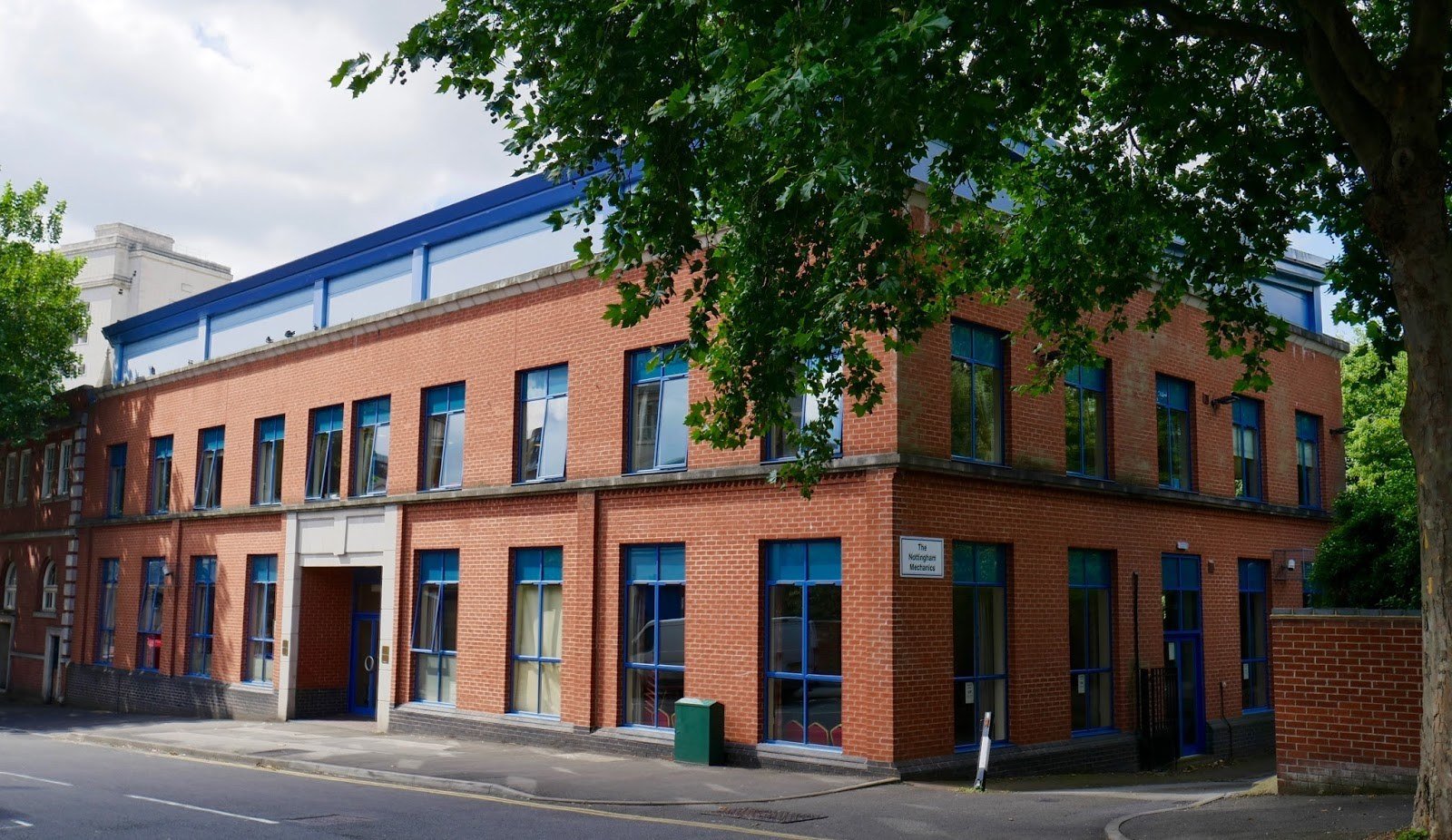 The many homes of the Nottingham Writers’ Club.

Nottingham Writers’ Club (NWC) was established in 1927 after a group of writers known as the Nottingham Writers’ Circle placed adverts in the ‘Evening Post’ and ‘Nottingham Guardian’. Still going strong, the Club can count Helen Cresswell, Alan Sillitoe and a largely forgotten ‘Golden Age’ bestseller among its former members.

One founder member was a painter and decorator called Arthur ‘Ernest’ Ashley (1906-1979) who played an important role in the literary history of Nottingham. Ashley swapped brush for pen in 1932, writing short stories for newspapers and magazines. His first detective novel, ‘Death at the Salutation’, arrived five years later, written under the name Francis Vivian*.

“Lomas was poisoned, shaved after death, and placed in the river. He is full of whisky and the post-mortem examination will undoubtedly prove that cocaine was in the alcohol. The murderer worked on him with a lavish hand, one so lavish that it may eventually prove to be his undoing.”

After the war, Ashley worked on the ‘Nottinghamshire Free Press’ newspaper whilst writing nine more in his series featuring Scotland Yard’s Detective Knollis. During this time the Francis Vivian books were hugely popular when it came to hardbacks and library loans. According to the Guardian’s John Hall, “Francis Vivian was neck and neck with Ngaio Marsh in second place after Agatha Christie.”

In 1950, during the peak of his popularity, the co-creator of Nottingham Writers’ Club was invited back to select the winning entry in their short story competition. He picked a story called ‘The General’s Dilemma’ by a 22-year-old aspiring writer by the name of Alan Sillitoe. Sillitoe recalled, “a crime novelist who earned his living by writing… gave [my story] first prize, telling me it was so well written and original that nothing further need to be done, and that I should try and get it published.”

This story later developed into Sillitoe’s second novel ‘The General’ (1960) and its plot was used by the 1968 American film ‘Counterpoint’ starring Charlton Heston and Leslie Nielsen. However, in the opinion of John Hall, Sillitoe never reached the heights of Francis Vivian, who Hall described as “the best local author after Byron and D. H. Lawrence.” Adding, “People who wouldn’t know Alan Sillitoe from George Eliot will stop [Ashley/Vivian] in the street and tell him they solved his latest detective story.”

‘Ernest’ Ashley had similar interests to Arthur Conan Doyle – psychology, beekeeping, the spirit world – and he featured these subjects in his books and lectures. His writing achievements were noted in NWC’s magazine ‘Scribe’, first published in 1933.

When Ashely had first attended Club meetings it was in the Haddon Room of the Black Boy Hotel on Long Row (to the right of where The Works and Five Leaves now sell their books). The famous hotel had been extended and reconstructed by Fothergill Watson and it was during his time here that the architect reversed his name to Watson Fothergill, some fifteen years after first working on the building in 1878. The hotel boasted Gracie Fields, George Formby, Gregory Peck and Laurence Olivier among its customers, and NWC also attracted some fine guest speakers, including Leslie Charteris, known for his ‘The Saint’ books featuring the adventures of Simon Templar, and Godfrey Winn, whose advice to the members was to, “Keep on writing. Go out on every possible occasion and meet people.”

By 1970 the Black Boy Hotel had been demolished, the site bought in auction by Littlewoods. NWC had left the building long before then, moving their meetings to The Elite in 1937. Francis Vivian returned as their first guest speaker. The Elite was another grand building, a super-cinema that had showed Nottingham’s first ‘talkie’ in 1929. The Elite’s shell remains in place on the Upper Parliament/King Street corner. NWC moved on after a year, to the nearby Albert Hotel on Derby Road where they regularly met until the outbreak of the Second World War.

The club reconvened after the war, this time at The Adult Schoolroom on Friar Lane. Back in 1798, a literacy school for adults had been set up there by William Singleton of the Methodist New Connection Church. The Quaker Samuel Fox later took it over and it became the Quaker School. The purpose-built premises also witnessed the country’s first Women’s Adult School, started by Caroline Howitt and Alice Scanlon. From there the Adult School movement spread nationwide.

NWC remained in the Quaker building until 1960, so it was here that Alan Sillitoe would have attended his meetings in the early ‘50s. Sillitoe joined the club at the prompting of his friend Flight Lieutenant Hales and his wife Madge, a poet. Sillitoe had been impressed by her poetry collection ‘Pine Silence’ (1950). An article in ‘Bygones’* claimed that Sillitoe won a NWC short story competition with ‘Mountain Jungle’, of which the adjudicator said, “I have no criticism of it, as it came perfectly into my vision as I read, and I felt that it was something that had been imprinted on the author’s mind. The atmosphere has been caught perfectly.” The story appears in the April 1951 edition of ‘Scribe’, for which Sillitoe also wrote the article ‘Disaster at Menton’ about a French flood.

After briefly meeting in the Guild Room of the Nottingham Cooperative Society Education Centre in Broad Street, they moved to The Bell Inn on Angel Row from 1960. It was then back to Friar Lane and a new venue, St Luke’s House, where the Club regularly met between 1966 and 1987.

One NWC President was the novelist Eric Malpass (1910-1996), a household name in Germany. The man from Long Eaton won the Observer Short Story Competition in 1955 and the first of his nineteen novels followed two years later. That debut book, ‘Beefy Jones’, won the Palma d’Oro in Italy for the best humourous novel of the year. In the mid-1960s Malpass ditched his four-decade long banking career and became a full-time writer. His novel ‘Morning’s at Seven’ (1966) was a smash hit across Europe spanning 60 editions. The story introduced the character Gaylord Pentecost, an innocent seven-year-old hero who observes the lives of his chaotic family with amusement and incredulity. German readers enjoyed Malpass’ witty descriptions of rural English family life, and they loved Gaylord who featured in five more bestsellers, some of which were adapted for German TV. James Last’s theme tun for ‘Morning’s at Seven’ (Morgens Um Sieben’) was used by the BBC as their ice-dancing theme. The book’s sequel, ‘The Height of the Moon’ (1967), was made into a movie. Malpass’ other books include a trilogy of Shakespeare’s life and a novel based on the life of Thomas Cranmer entitled ‘Of Human Frailty’ (1987).

A highlight of this time at St Luke’s was that the writers’ club had their own radio show, recorded at York House for BBC Radio Nottingham. After leaving St Luke’s House it was off to Birbeck House in Trinity Square, a rather ugly building that wasn’t a patch on the old Mechanics Building that it replaced. NWC met in the card room on the first floor, where the Nottingham Mechanics were now based.

By this time another successful writer had succeeded Eric Malpass as club president, Peter Walker (1936-2017). In 1967 Walker wrote ‘Carnaby and the Highjackers’, the first of eleven books about a flamboyant detective. In 1979 his new series began, ‘Constable on the Hill’, set in the fictional village of Aidensfield, Yorkshire and written under the pen name Nicholas Rhea. At this time Walker was a serving policeman. He retired from the force in 1982. His ‘Constable’ series with its fictional village bobby inspired the ’60s’ set TV show ‘Heartbeat’ which ran for 18 series, averaging audiences of 14 million in 2001. An author of over 130 books, Walker founded the Crime Writers’ Association’s Northern Chapter. His advice to his fellow NWC members was, “Ideas are all around. Everything I do, everywhere I go, everything I see is potential material.”

In 2003 NWC relocating to the new home of the Nottingham Mechanics on North Sherwood Street where they still gather. The Mansfield writer Roy Bainton took over as President in 2007. Bainton has written TV scripts, radio dramas, music tour brochures, biography, novels and poetry, and regularly writes for NWC’s quarterly magazine ‘Scribe’.

The Club still holds regular poetry and prose competitions, each named after a former member; the writers Ena Young, Rosemary Robb, Dolly Sewell and Gladys Bungay all having trophies named after them. A four-time recipient of the Gladys Bungay novel award is long-time member Glenis Wilson, whose reluctant sleuth Harry Radcliffe is keeping up the Club’s great tradition for crime fiction. I’m sure the club’s once famous co-founder would approve, and of the fact that NWC have entertained the crime writers Stephen Booth, Simon Brett and John Harvey as guest speakers.

Nottingham Writers’ Club aims to, “Provide friendly co-operation among writers and to promote activities for their mutual interest and benefit,” and they welcome writers of all experience.

* The full ‘Bygones’ article, written by members of Nottingham Writers’ Club, is now available to read on the Nottingham UNESCO City of Literature website HERE.