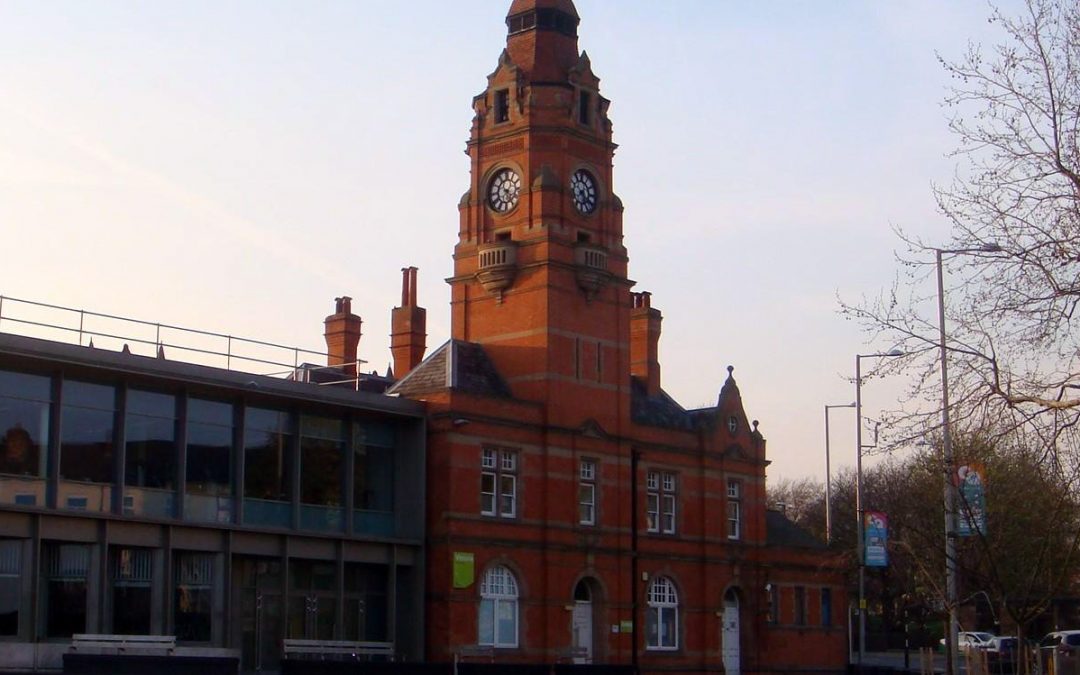 Before becoming Sneinton Market, the area was the site of a clay pipe workshop. Its nearest homes, back-to-back housing known as ‘the Bottoms’, were more like slums.

William Booth, born 1829, described the Sneinton of his youth, recalling “the degradation and helpless misery of the poor stockingers, wandering gaunt and hunger-stricken through the streets.”

Towards the middle of the 19th Century the market area was hosting ‘blood tubs’. These were plays that were performed by the poor, for the poor. A level below ‘penny gaffs’, these lewd and violent dramas were unlicensed shows that ranged from the recounting of Shakespeare to the recreating of local crimes. Often improvising, the performers would react to the crowd, doing whatever it took to part them from their loose change.

It’s possible that some of Robert Millhouse’s children were amongst those gathering to watch the ‘blood tubs’. Millhouse was a poet who had worked at a stocking loom and spent most of his life in poverty. He had lived in West Street, a stone’s throw from Sneinton Market, before moving around the corner to Walker Street where he died in 1839, aged fifty. Just three years earlier, Millhouse had married his second wife Marian at St Stephen’s Church. Seven children survived him.

Robert Millhouse’s popular work includes ‘Sherwood Forest’, ‘Blossoms’, and ‘The Song of the Patriot’. His best work is thought to be ‘The Destinies of Man’. Millhouse has been named ‘The Artisan Poet of Nottingham’ and ‘The Burns of Sherwood Forest’.

“From my early boyhood until now

Sneinton officially became part of Nottingham in 1877. This was two years after Arthur John Lawrence had married Lydia Beardsall at Sneinton’s Parish Church, St Stephen’s. Their fourth child, David Herbert Lawrence, born in 1885, mentions the church in one of his early short stories, ‘Goose Fair’.

By 1920, Sneinton Market has made its way into literature, with this description in D. H. Lawrence’s ‘Women in Love’:

“The old market-square was not very large, a mere bare patch of granite setts, usually with a few fruit-stalls under a wall. It was in a poor quarter of the town. Meagre houses stood down one side, there was a hosiery factory, a great blank with myriad oblong windows, at the end, a street of little shops with flagstone pavement down the other side, and, for a crowning monument, the public baths, of new red brick, with a clock-tower. The people who moved about seemed stumpy and sordid, the air seemed to smell rather dirty, there was a sense of many mean streets ramifying off into warrens of meanness. Now and again a great chocolate-and-yellow tramcar ground round a difficult bend under the hosiery factory.”

And in chapter 26, Ursula Brangwen spends time with the Sneinton locals:

“Ursula was superficially thrilled when she found herself out among the common people, in the jumbled place piled with old bedding, heaps of old iron, shabby crockery in pale lots, muffled lots of unthinkable clothing. She and Birkin went unwillingly down the narrow aisle between the rusty wares. He was looking at the goods, she at the people.”

By the 1930s, the wholesale market had been modernised. Houses were demolished, replaced by strong, open-fronted, glazed-roofed units. Streets became Avenues A, B and C. The final one was named Freckingham Street after the man behind the developments, the Chairman of the Markets and Fairs Committee, Alderman H. J. Freckingham.

Further development was put on hold due to World War II, during which Sneinton was heavily bombed. The Nottingham playwright Stephen Lowe was born in Sneinton in 1947. He grew up in a typical back-to-back house before his family moved to the high-rise of Manvers Court. With no books at home his library card became his salvation, Lawrence’s ‘Sons and Lovers’ having the most impact. A working-class lad wanting to be an actor, Lowe saw much of his own life and hopes in the character Paul Morel and the book convinced him that it was possible to be a writer.

Stephen Lowe was largely raised by his mother. His father had served in the army and returned home with meningitis and TB, the treatment for which left him deaf. Lowe used his tense home life as the source for his autobiographical ‘Moving Pictures’. His award-winning, breakthrough play ‘Touched’ is set in Sneinton during the days between VE Day and VJ Day. The play focuses on working‑class women living with loss and hope. It was written as a reaction to there being little recognition for women like his mother who had stayed at home, fighting their different battles.

A year after ‘Touched’ first opened, Richard Eyre produced another of Lowe’s Sneinton-set plays. This time it was an early screenplay for the BBC. Set and filmed in Sneinton Market, ‘Cries from the Watchtower’ tells of a small-time watchmaker who finds his livelihood threatened by cheaply imported digital watches in an era of new silicon chip technology. It was inspired by a friend’s father, a Mormon, who had a stall at which he’d repair watches amid the bustling crowd. This was the kind of Nottingham scene Lowe had observed from a young age and he used the stallholders’ comedic banter to develop his ear for dialogue.

By the late seventies, as Stephen Lowe’s name was on the rise, Sneinton Market was falling into a state of disrepair.

During the 1980s, Dave Ablitt interviewed seven Sneinton residents for ‘Sneinton Magazine’, of which he was a founder. Ablitt has been involved in community groups and local politics for decades and his diverse interviews are reproduced in his 2019 book ‘Sneinton People’. One of his recorded conversations was with John Tyson, the left-wing vicar of St Stephen’s Church, who had an affection for Soviet Socialism and nuclear disarmament.

Also based on interviews with local people is ‘Stories of Sneinton Market’ (2016) by Colin Haynes. Haynes was one of the first people to sort through his late friend Ray Gosling’s archive. Haynes and Gosling had worked together on the St Ann’s paper ‘Chase Chat’.

In 2014, the market received some much-needed investment and with it came a new era as part of Nottingham’s Creative Quarter. Sneinton Market’s Avenues were now home to over twenty creative businesses; a hub of artists, musicians, crafters, designers and more, embracing the original, the quirky and the independent. The ‘plaza’ has hosted live music events and various performances.

In 2017 ‘LeftLion’ moved their headquarters from Hockley to the end of Freckingham Street. It was also in 2017 that Nottingham’s culture magazine went monthly and Bridie Squires became their editor. Squires became NTU’s first Writer-in-Residence in 2019 and she’s since gone on to develop and perform her own full-length, one-woman show, ‘Casino Zero’.

‘LeftLion’ has been promoting Notts writers, books and poets since 2003, from which time scores of local writers have contributed articles to their pages and website. The magazine enjoyed a literary takeover in January 2018, the whole edition being dedicated to Notts literature.

Before ‘LeftLion’ moved to Sneinton, James Walker had been their literary editor. Over the past decade, Walker has done much to help to promote Nottingham’s literary scene and celebrate its history. Developing a specialism for digital storytelling, with an emphasis on different platforms and multi-collaboration, Walker continues to explore the relationship between digital and literature. His projects include ‘Dawn of the Unread’, a graphic novel with additional digital content; its follow up, ‘Whatever People Say I Am’, created to dispel myths around identity and challenge stereotypes; and ‘D.H. Lawrence: A Digital Pilgrimage’, a memory theatre retracing Lawrence’s self-imposed exile. Earlier projects of Walker’s include ‘The Sillitoe Trail’ (2013) and ‘Being Arthur’ (2014), a live 24-hour Twitter presentation of ‘Saturday Night and Sunday Morning’.

On the upper floor of ‘LeftLion’s HQ is the current office of Nottingham UNESCO City of Literature. NUCoL’s Executive Assistant is the poet Leanne Moden, whose collection ‘Get Over Yourself’ has just been published. Expect social commentary (‘A Piece of the Pie’), humour (‘Bad Kisser’) and wisdom (‘Call and Response’) as Moden brings us her take on modern life. As a performance poet Moden has spoken at events across the UK and Europe, including WOMAD Festival, the Edinburgh Fringe and the Isle of Wight’s Bestival. Last year she performed her first solo poetry show, ‘Skip Skip Skip’, full of stories of belonging, exclusion and teenage rebellion.

Sneinton Market has its own website where you can keep up to date with its latest news.