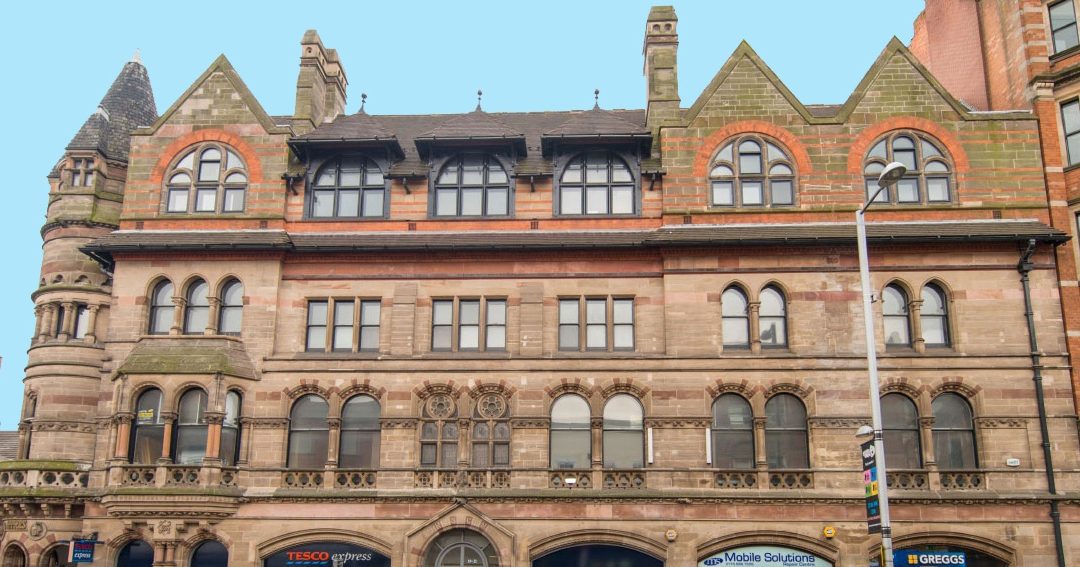 There’s a plaque inside the entrance of the Express Building on Upper Parliament Street that marks Graham Greene’s time working there on the ‘Nottingham Journal’, and his “happy memories of this bizarre old building…”

As he recalled it, “One entered … through a narrow stone Gothic door, stained with soot … and the heads of Liberal statesmen stuck out above like gargoyles; on rainy days the nose of Gladstone dripped on my head when I came in.”

That carved head of Gladstone is above the entrance, along with fellow liberals Cobden and Bright. The Express Building had been built fifty years before Greene arrived in the city, for the proprietors of the liberal leaning ‘Nottingham Express’ newspaper. The building was one of Watson Fothergill’s designs, his corner entrance tower inspired by the work of the architect Burges. Fothergill later added an upper level, providing the Express with more office space, and it was in here, on the 1st of November 1925, that Graham Greene began working as a trainee sub-editor at what was then the ‘Nottingham Journal’, described by Greene as “a third-rate paper, run by third-rate people”.

In his first volume of autobiography, ‘A Sort of Life’ (1971), Greene wrote: “I arrived one wet night in Nottingham and woke next morning in the unknown city to an equally dark day. This was not like a London smog; the streets were free of vapour, the electric lights shone clearly: the fog lay somewhere out of sight beyond the lamps. When I read Dickens on Victorian London, I think of Nottingham in the twenties. There was an elderly ‘boots’ still employed at the Black Dog Inn, there were girls suffering from unemployment in the lace trade, who would, so it was said, sleep with you in return for a high tea with muffins, and a haggard blue-haired prostitute, ruined by amateur competition, haunted the corner by W.H. Smith’s bookshop. Trams rattled downhill through the goose-market and on to the blackened castle.”

In Greene’s defence the city wasn’t looking its best. During Nottingham’s winter months the air was often so thick that our bus conductors had to walk ahead of their ride in order to guide the driver.

Greene referred to the fog again in a letter to his fiancée Vivien: “There’s a most marvellous fog here today, my love. It makes walking a thrilling adventure. I’ve never been in such a fog before in my life. If I stretch out my walking stick in front of me, the ferrule is half lost in obscurity. Coming back, I twice lost my way, & ran into a cyclist, to our mutual surprise. Stepping off a pavement to cross to the other side becomes a wild and fantastic adventure… if you never hear from me again, you will know that I am moving round in little plaintive circles, looking for a pavement.”

A recent graduate of Oxford University, Greene had worked for a short period as a private tutor before landing work here as an unpaid “cub-reported”. He had just turned twenty-one. Work began in the early evening and mostly involved typing up telegrams and interpreting handwriting. The late start meant he could attend matinees at the nearby Theatre Royal and several “little dark cinemas” that “offered matinee seats for fourpence in the stalls”. Greene would often watch back-to-back films before work. The cheap matinees eased his loneliness and satisfied his love of the pictures. He would have also visited Nottingham’s first super-cinema, The Elite, that had opened in 1921 close to ‘The Journal’s’ office. The Elite was the height of luxury, boasting a grand concert organ and a full orchestra.

This was the era of great comedies, starring Harold Lloyd (‘The Freshman’), Buster Keaton (‘Go West’), and Charlie Chaplin (‘The Gold Rush’), of whom Greene was a great admirer. In 1952 he wrote an open letter to Chaplin defending him after Sen. Joseph McCarthy had labelled him a communist and denied him entry back into the United States. “This is a letter of welcome,” wrote Greene, “not only to the screen’s finest artist (the only man who writes, directs and acts his own pictures and even composes their music), but to one of the greatest liberals of our day.” The letter ended thus: “Intolerance in any country wounds freedom throughout the world.”

Upper Parliament Street would have appealed to any lover of the stage and screen and yet Greene wrote to Vivien that, “There’s absolutely nothing worth doing in this place. no excitement, no interest, nothing worth a halfpenny curse.”

“[Nottingham] was the furthest north I had ever been,” he wrote in his autobiography, “the first strange city in which I had made home, alone, without friends.” He wasn’t quite alone as he had with him his dog Paddy, a sickly rough-haired terrier. Nor was he friendless as he’d met Cecil Roberts who’d worked at ‘The Journal’ since 1920 and was already a successful author. Greene showed Roberts his pamphlet of poetry, ‘Babbling April’, published at Oxford University. The poetry wasn’t well received and was to be the last of his published verse.

It was as a student journalist at university that Greene had first received a letter from Vivien Dayrell-Browning, a Roman Catholic writing to chastise him for his article linking cinema, sex and religion. Greene responded with an apology and they later began courting. By the time he was in Nottingham, they were engaged to be married. He would make trips back to London to see her, and tout for a job, and one weekend she came up to Nottingham. Vivien was already a published author when she met Greene. Her first book ‘The Little Wings’, a collection of poetry and prose, featured an introduction by G. K. Chesterton. A converted Catholic, she had rejected Greene’s initial proposal of marriage on the grounds that he was an atheist.

For Greene, “religion went no deeper than the sentimental hymns in the school chapel.” However, he wrote, “It occurred to me, during the long empty mornings, that if I were to marry a Catholic I ought at least to learn the nature and limits of the beliefs she held. It was only fair, since she knew what I believed—in nothing supernatural. Besides, I thought, it would kill the time.”

So to address their marital obstacle, and ease his boredom, Greene: “took Paddy for a walk to the sooty neo Gothic Cathedral” that was St Barnabas on Derby Road, a place that for Greene possessed “a certain gloomy power because it represented the inconceivable and the incredible”. He popped a note into the wooden inquiries box, asking for instruction. At this time, he “had no intention of being received into the Church.”

A week later he returned to St Barnabas and met Father Trollope, a “very tall and very fat man with big smooth jowls which looked as though they had never needed a razor.” Trollope was a former West End actor whose bookshelves included plays alongside theological books. The men met once or twice a week, for an hour at a time, sometimes in odd places like the upper deck of a tram. The purpose of Greene’s initial visits was kept from his teacher. He then “began to fear that [Father Trollope] would distrust the genuineness of my conversion if it so happened that I chose to be received, for after a few weeks of serious argument the “if” was becoming less and less improbable.”

This deepening interest led to Greene adopting Catholicism and he was received into the Roman Catholic Church at the Cathedral Church of St. Barnabas on February 28th, 1926.

Following his Baptism was his first General Confession, “a humiliating ordeal” which “covers the whole of man’s previous life.” He added that, “…in the first Confession a convert really believes in his own promises. I carried mine down with me like heavy stones into an empty corner of the Cathedral, dark already in the early afternoon, and the only witness of my Baptism was a woman who had been dusting the chairs. I took the name of Thomas—after St. Thomas the doubter and not Thomas Aquinas—and then I went on to the Nottingham Journal office and football results and the evening of potato chips.”

Greene married Vivien the following year, their children Lucy and Francis coming along in 1933 and 1936 respectively. The Greenes separated after 21 years of marriage but never divorced. Mrs Greene became the world’s foremost expert on dolls’ houses and lived to the age of 98.

Catholicism was to shape Graham Greene’s writing career. He would say that he was a novelist who simply happened to be a Catholic but it was from a Catholic perspective that he explored world issues. His works have been both hailed and criticised by Catholics for his treatment of the faith. It may even be that Greene’s religious conviction kept him from killing himself – suicide being a mortal sin. He had made several attempts on his life prior to his conversion and continued to live with depression for many years.

Nottingham changed Greene. You might say that it was here that he got his first all-important look at how the other half lived. According to Norman Sherry, Greene’s official biographer, “He realised in Nottingham that he was a rather stuck-up, superior middle-class boy who had been brought up to look down on all those rather dirty, untidy people below him.”

Those dirty, untidy people, included one of the lodgers at Greene’s digs on Hamilton Road, off Sherwood Rise, a man he described as “the lowest cesspool of dirt I’ve ever come across”. Greene moved on after two weeks. The improved accommodation came with a less accommodating landlady, a busybody called Mrs Loney, who served up tinned salmon most evenings. She was a thin, complaining widow, a “lazy woman who lived mostly in her basement from where she spied on her neighbours,” wrote Greene.

Mrs Loney inspired the characters Mrs Coney in ‘It’s a Battlefield’ and ‘Brighton Rock’s’ Mrs Prewitt, “a bitter woman who likes tinned salmon”. Prewitt, in her husband’s estimation, is a “hag”.

Loney’s basement was in Ivy House, All Saints Terrace, was just off Waverley Street, close to a red-light area. Ivy House became Greene’s model for disreputable houses in a number of his novels (‘It’s a Battlefield’, ‘Brighton Rock’, ‘A Gun for Sale’) and the play ‘The Potting Shed’.

Most mornings Greene would take Paddy for a walk in the nearby soot-leafed Arboretum, “I don’t know why a certain wry love of Nottingham lodged in my imagination,” he wrote. Perhaps it was his fascination with the “seedy” side of life, of which Nottingham had offered an insight. Our mean provincial city informed his 1936 noir novel, ‘A Gun for Sale’, set in a fictionalised version of our “grim city a few hours from London”. He calls it Nottwich, a place where: “Fog lay over the city like a night sky with no stars.” Before Greene’s Nottingham novel had been published, the film rights had already been sold, the first of five adaptations being ‘A Gun For Hire’ starring Allan Ladd (1936). Nottwich is later referred to in one of Greene’s classics, ‘Our Man in Havana’ (1958).

Shortly after his time in Nottingham, Greene wrote to Vivien, “Thank God Nottingham’s over. It’s like coming back into real life again …” Ten days later he landed a job on ‘The Times’ where he worked until 1929, a job he’d not have got without his months at ‘The Journal’.

According to Sherry (written when Greene was in his 80s) he “now looks back nostalgically to the days he was [in Nottingham]”.

[In Nottingham}, I had fallen into a pocket out of life and out of time, but I was not unhappy.