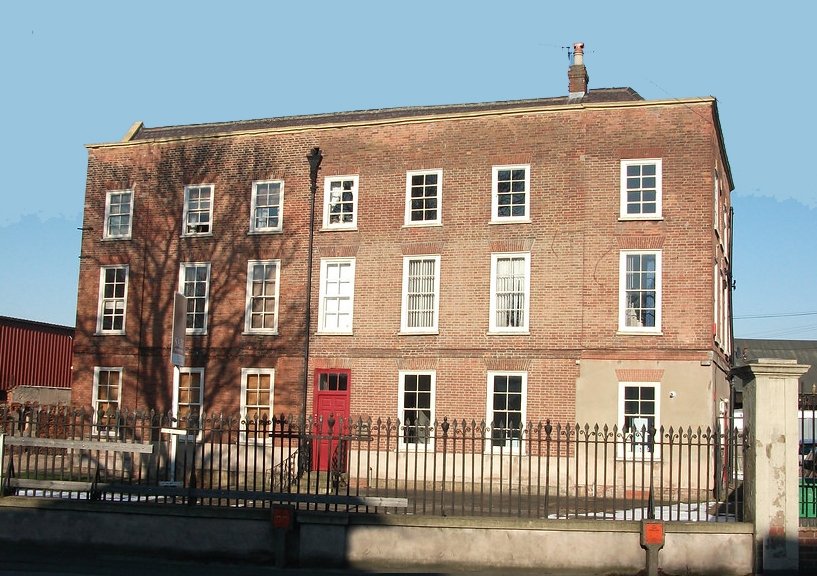 Basford House, where Thomas Bailey compiled his Annals of Nottinghamshire and his son Philip wrote what would become one of the longest poems ever written in English.

It was in Basford House that the original version of ‘Festus’ was written, a favourite poem of Queen Victoria’s. The poem grew to be one of the longest in the land and it was said to be a sign of intelligence to have read it.

Aged 20, Philip James Bailey had read Goethe’s ‘Faust’. The German poem compelled him to write ‘Festus’, his own version of the legend, in which he incorporated a more impressive spiritual content, his eponymous hero taking a pilgrimage that demonstrated the ultimate triumph of love and good over evil. Between 1836 and 1839 Bailey dedicated himself to the writing of his poem, working in isolation at Basford House. It was published by William Pickering in London without Bailey’s name, although its dedication states “Old Basford, near Nottingham, 1839”. It was seen as remarkable that a young man could produce a work of such insight and imagination and ‘Festus’ attracted great interest from all ‘intelligent classes’. That poem’s first concentrated edition had great poetic power and was warmly received by the writers Edward Bulwer-Lytton, William Makepeace Thackeray and Alfred Tennyson, the latter writing to a friend: “order it and read: you will most likely find it a great bore, but there are really very grand things in ‘Festus’.”

Tennyson’s view is not uncommon as ‘Festus’ is wordy in the extreme and at times borders on the unreadable, yet it also contains passages of great force and beauty such as:

“We live in deeds, not years; in thoughts, not breaths;

We should count time by heart throbs.

He most lives who thinks most, feels the noblest, acts the best.”

Philip James Bailey was a well-respected member of Nottingham’s literary scene. Friends with fellow members of Bromley House Library, William and Mary Howitt, he read ‘Festus’ to them in the Howitt’s chemist’s shop on Parliament Street and later visited the couple in Rome when holidaying with his second wife Anne, daughter of Alderman George Carey of Nottingham.

The 1845 second edition of ‘Festus’ was the first of many new expanded versions up to an 11th, jubilee edition, of 1889 by which time the poem contained over 40,000 lines in 3 volumes. The additions drowned the poetry in theological and metaphysical treatise and the poem’s popularity fluctuated. ‘Festus’ remained well read in the United States with in excess of 30 editions throughout the second half of the 19th century.

Philip James Bailey dedicated ‘Festus’ to his father Thomas with this poem:

‘MY FATHER! unto thee to whom I owe

All that I am, all that I have and can;

Who madest me in thyself the sum of man

In all its generous aims and powers to know,

These first–fruits bring I; nor do thou forego

Marking when I the feat thus closed, began,

Which numbers now near three years from its plan,

Not twenty summers had embrowned my brow.

Life is at blood–heat every page doth prove.

Bear with it. Nature means Necessity.

If here be aught which thou canst love, it springs

Out of the hope that I may earn that love,

More unto me than immortality;

Or to have strung my harp with golden strings.’

Philip’s father, Thomas Bailey, was a distinguished Nottingham writer in his own right. In 1824 he wrote ‘A Sermon on the Death of Byron’ having taken young Philip to see Lord Byron’s body lying-in-state. Philip inherited his father’s love of poetry and committed to memory the whole of Byron’s long narrative poem ‘Childe Harold’s Pilgrimage’.

Thomas Bailey was largely self-educated (his father was the town jailer). He became a successful businessman, initially living on Coalpit Lane, and worked as a silk-stocking trader and Wheeler Gate wine merchant with premises on Low Pavement. A great believer in self-improvement he became a fine public speaker and, in 1830, had a failed attempt to represent Nottingham as a Liberal candidate. He did however contribute to a campaign that led to the 1832 Reform Act creating a more democratic House of Commons. He erected a memorial and column in the grounds of Basford House to commemorate the Act’s passing (the memorial plaque (pictured) is now in the old cemetery opposite Basford House). A few years later he was elected to the town council on which he served for six years.

It was in 1832 that Thomas Bailey had bought the red-bricked Basford House. Formerly named Manor House the large building near Basford Church was built around 1700. Altered in the late 19th and 20th centuries it’s now flats and offices. Thomas Bailey lived in Basford House for the rest of his life. In 1845 he became owner and editor of the weekly ‘Nottingham Mercury’ and, a great believer in the power of education and literature, he used his paper to help promote his views. His opinions proved too temperate for his readers and a declining circulation resulted in the newspaper folding in 1852, leaving Bailey to focus more on his own writing, producing prose and poetry full-time. He became a noted historian after compiling the four-volume ‘The Annals of Nottinghamshire’ (1852-56). He also wrote ‘Village Reform: the Great Social Necessity of Britain’ (1854) and ‘Records of Longevity’ (1857) as well as handbooks on Nottingham Castle and Newstead Abbey, and many treatises such as ‘What is Life?’. He wrote thirteen books in total. His poetry includes ‘St Ann’s Well’ which is quoted in ‘Exploring Nottinghamshire Writers’.

A great collector of other people’s books, Thomas Bailey continued to champion the importance of literature and set up a village library. He died in Basford House in 1856, aged 71, and was buried in the cemetery opposite. It was a sense of great pride for Thomas Bailey that his son Philip became a celebrated poet.

Philip James Bailey was born in Nottingham in 1816 in a since demolished house. There’s a plaque (image below) on the corner of Fletcher Gate/Middle Pavement which states:

STOOD THE HOUSE IN WHICH

(note: The ‘on this site’ statement is probably false)

Young Philip was afforded the best education Nottingham had to offer and became a trained barrister but never practised. ‘Festus’ was his obsession and he continued to work on his magnum opus for 50 years. He is associated with the Spasmodic school of poetry. His other poems ‘The Angel World’ (1850), ‘The Mystic’ (1855), ‘The Age’ (1858), and ‘The Universal Hymn’ (1867), were unsuccessful.

In 1856, Philip James Bailey was awarded a Civil List pension of a hundred pounds a year for his services to literature. He lived in Jersey, Lee (North Devon) and Blackheath (London) before retiring to a house in the Ropewalk where he died from influenza in 1902, aged 68. There’s a nice image of Bailey at his desk inside his Ropewalk home (pictured below). He is buried in Church (or ‘Rock’) Cemetery on Mansfield Road.

He shares a headstone with Annie Sophia, his wife of 33 years. The stone includes a quote from ‘Festus’:

TO THE CHERISHED MEMORY OF

FOR 33 YEARS THE DEVOTED WIFE OF

“BLESSED ARE THE PURE IN HEART FOR THEY

TO THE REVERED AND BELOVED MEMORY OF

WHO ENTERED INTO REST SEPTEMBER 6th 1902

“DEATH IS ANOTHER LIFE. WE BOW OUR HEADS

AT GOING OUT, WE THINK, AND ENTER STRAIGHT

ANOTHER GOLDEN CHAMBER OF THE KING’S

LARGER THAN THIS WE LEAVE, AND LOVELIER.”

ONLY SON OF PHILIP JAMES BAILEY

There is a bust of Philip James Bailey by Albert Toft (pictured above right) that’s now in Newstead Abbey’s writers’ garden. For the best part of a century it had stood at the entrance to Nottingham Castle.