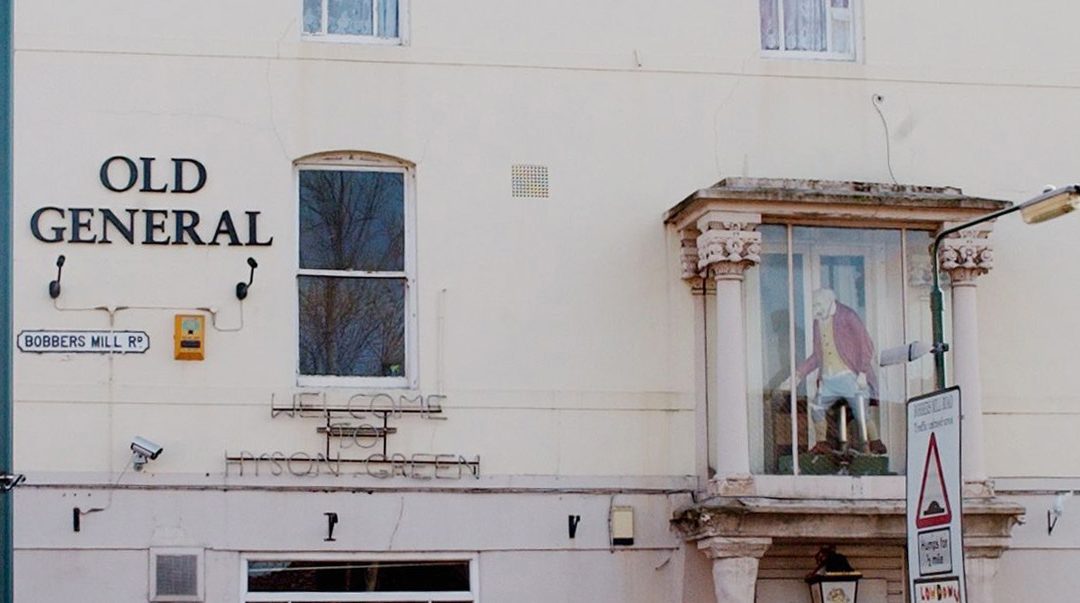 The Old General Pub/Hotel used to stand on the corner of Radford Road and Bobbers Mill Road. It once proclaimed, in neon lighting, ‘Welcome to Hyson Green’, but it’s its statue of a Nottingham pauper that caught the public’s imagination.

The pub was built in 1883 by John Holmes. The sculpture that made the pub’s name was crafted by his brother Joseph. Joseph Holmes, best known for his work with marble, was more used to commissions for funeral vases or stone angels when he was asked to carve a statue of local man Benjamin Mayo, AKA the Old General. Holmes carved the statue in an open field near the pub from a solid block of stone that came from Caen in France. After appearing in Nottingham Castle’s museum, the statue was moved to a showroom before arriving in its recognisable location in the window above the main entrance of the Old General Pub on the Bobbers Mill Road side.

The statue was painted white and every Christmas for over a century it was dressed as Santa Claus, the Old General’s red cloak and white beard becoming a festive landmark. Wartime damage broke the Old General’s hand but couldn’t stop this Yuletide sight.

Benjamin Mayo, the real Old General, was born around 1779. Thought of as a ‘half-wit’ the popular local eccentric was a fixture in and around Nottingham’s Market Place where he sold ballads, broadsheets and chapbooks. Mayo’s hunched stoop and deformed legs gave him a recognisable gait as he shuffled round with newspapers folded over his arm. Our leading librarian John Potter Briscoe described him as “very round shouldered and his stature was no more than four feet high. His eyes were dark grey…” and “he wore his shirt unbuttoned revealing his copper coloured chest.”

Ben Mayo lived most of his life with his mother in the St Peter’s workhouse he was born in (this was where the Broad Marsh Centre now is). For years the pauper turned a profit selling the latest news, especially when it involved a disaster or scandal. Dying confessions were also in demand as were any convicted criminal’s final words before the public gallows. Often these were copies of a burglar’s last letter to a loved one.

On dry news days, Mayo was known to sell speeches for a penny, advertising that he had copies of the latest words from the Duke of York or Prince of Wales, only to dupe his customers. When they protested that they’d received a blank sheet of paper, Mayo responded: “Is Royal ‘ighness never said ought.”

After Mayo’s mother had died and his workhouse was shutdown, its master, Mr Hudson, took him into his own home. Hudson provided for Mayo, not wanting to see him go to the new workhouse. Thanks to his benefactor, Mayo got to ditch his grey clothing for a red coat with military epaulettes. Hudson took Mayo with him to St Peter’s church every Sunday. Hudson wasn’t the only local bigwig that our Old General mixed with, he was well known to most of Nottingham’s authority figures who put up with the loveable rogue.

The Old General came into his own on Mickleton Monday, a day when he led schoolchildren through the streets like a good-intentioned pied piper. In the days before maps were commonplace, the Mickleton Jury – consisting of the Mayor, two Sheriffs and the Corporation’s important townsmen – would ‘beat the bounds’ on the first Thursday in September, establishing the town’s boundaries. The following Monday, the jury returned to note down any obstruction, irregularities or petty offences. Backing them up was Mayo and his band of youths demanding action. If anyone had kindling too close to their house or a loose pig in their yard, the General and his troop of miners would sort it. Their role, following behind the jury, was to enforce the immediate removal of obstructions or to remove them themselves.

The children loved Mickleton Monday. Those that weren’t given permission to have the day off school either bunked off or were liberated by Mayo’s battalion of kids shouting, “Out, Out, Out” and throwing mud at the school until those still inside were released. This one-day holiday ended at the entrance to Nottingham Castle, with another tradition, in which the army of children demanded admission to the yard only to be denied access, then compensated by sweetmeats. These were thrown over the gateway of the Castle lodge to the expectant crowd.

It wasn’t just on Mickleton Monday that Mayo had his young followers. The Old General would regularly be seen in his Market Place patch drilling his army of truants like they were soldiers. Mayo saw himself as second only to the Mayor in importance within Nottingham and by the age of sixty he was wearing a military cap which, along with his read coat, gave him the look of the ringleader that, in many ways, he was.

After Mr Hudson left Nottingham the Old General went to St Mary’s workhouse, also known as Nottingham Union workhouse, between Mansfield Road and York Street (where BBC’s York House used to be). He lived here with 1149 other paupers. Mayo died in in 1843 after failing to recover from a fall.

He was buried in the old St Peter’s Churchyard, the Broad Marsh burial ground. He was so fondly remembered that subscribers paid for a tablet to be erected in his memory. This is in the quiet walled garden close to the General Cemetery’s Clarendon Street entrance. It reads:

BENJAMIN MAYO COMMONLY KNOWN BY THE NAME OF “THE OLD GENERAL” DIED IN THE NOTTINGHAM UNION WORK-HOUSE 12TH JANUARY 1843, AGED 64 YEARS. A FEW INHABITANTS OF THIS TOWN, ASSOCIATING HIS PECULIARITIES AND ECCENTRICITIES, WITH REMINISCENCES OF THEIR EARLY BOYHOOD, HAVE ERECTED THIS TABLET TO HIS MEMORY.

Originally mounted on the wall, the tablet is now in a state of decay. There’s another nod to the Old General in Carrington as Mayo Road is named after him.

As for the Old General’s statue, he’s said to be hiding somewhere in Hyson Green.