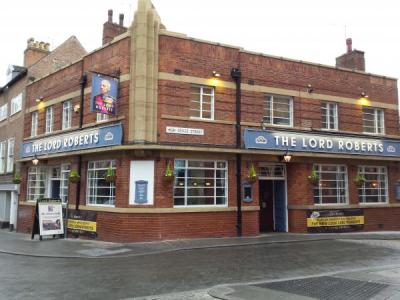 The Lord Roberts has been on the corner of Broad Street and High Cross Street since 1936. Thanks to its art-deco style the building was listed in Nottingham Civic Society’s ‘List of Local Heritage Assets of the City of Nottingham’.

The gay-friendly The Lord Roberts was once home to the writing group ‘Pink Ink’ who held their meetings in the pub’s cellar. Pink Ink was founded in the ‘80s by Tony Challis, current Chair of Nottingham Poetry Society, and over the years the group met at a variety of locations including the meeting room at the Forest Tavern. Challis went on to initiate Rainbow Writers and an LGBT Writers’ Group at Nottingham Writers’ Studio where he was named Poet of the Year in 2019.

Gregory Woods joined Pink Ink shortly after moving to Nottingham in 1990 to teach at our Polytechnic (now Nottingham Trent University). Professor Woods is now Emeritus Professor of Gay and Lesbian Studies at NTU (more on this later) where he carries out research in the areas of LGBT literary and cultural studies. Woods is the author of ‘Articulate Flesh: Male Homo-eroticism and Modern Poetry’ (1987), ‘A History of Gay Literature’ (1998), and ‘Homintern: How Gay Culture Liberated the Modern World’ (2016), a work that crosses continents and languages, tracing the networks of writers, artists, intellectuals and film stars who transformed Western 20th-century culture. His poetry includes ‘We Have the Melon’ (1992), described by ‘Time Out’ as “graphic, beautiful, gay love poems”, and ‘An Ordinary Dog’ (2011), his latest collection. Woods is currently writing a long dramatic monologue in the voice of Samuel Butler.

Homosexual sex many have been decriminalised by the 1970s (with a host of caveats) but homophobia and discrimination remained rife in mainstream society. Throughout the ‘70s Nottingham’s Evening Post refused advertising space to the Nottingham Campaign for Homosexual Equality (CHE), the Post’s boss writing, “I do not approve of homosexuality.” It was an attitude shared by the leader of the Conservative group in 1977 who “always regarded homosexuality as one form of perversion.”

The fortnightly publication ‘Gay News’, founded in 1972, had been an important mouthpiece for its former collaborators CHE and the Gay Liberation Front (GLF). For years WHSmith refused to stock ‘Gay News’ and wouldn’t allow their distribution company to transport it to other outlets. The newspaper’s editor Dennis Lemon attended a meeting of Nottingham CHE. When ‘Gay News’ ceased trading Nottingham’s writers responded with their own publications.

Colin Clews produced ‘G.E.M.’ (Gay East Midlands) in Nottingham. Clews was a key figure in the ‘80s, campaigning to get the Nottingham Labour Party to take up lesbian and gay rights, and he was instrumental in setting up Nottingham’s first AIDS Information Project. ‘G.E.M.’ was Britain’s only gay and lesbian publication when the AIDS crisis struck, a time of great hostility towards gay men. Clews examines the many challenges faced by LGBT people in the 1980s in his book ‘Gay in the 80s: from fighting for our rights to fighting for our lives’ (2017).

Back in the mid-‘80s Clews had helped Hockley’s Mushroom bookshop establish what became a comprehensive section of lesbian and gay books, the first such collection in a Nottingham bookshop. He was a regular customer at Mushroom and encouraged them to stock ‘G.E.M’ as he had done with ‘Gay Times’. Mushroom continued to stock Nottingham’s many LGBT magazines and free sheets including ‘Diversion’ (1986); ‘Gay Nottingham’ (’85-‘87), ‘Metrogay’ (’87-89), ‘Outright’ (’89-97) and ‘Lookout’ (’96-’15), until the shop closed for good in 2000.

‘Gay Nottingham’ and its successor ‘Metrogay’ were started by Richard McCance, an openly gay member of the Labour Party who was asked to stand as a candidate in the local council elections. Defying expectations McCance won his seat, becoming a Nottingham City Councillor in 1983. His gay and lesbian free sheets became a 16-page magazine with a circulation of 5000 providing news and informing for the LGBT community. McCance recounted his experience in ‘The Skaters Waltz’ which features in ‘Late Outbursts: LGBTQ Memoirs’ (2014).

Mushroom bookshop prominently displayed the local gay free papers whilst ‘Gay Times’ became the shop’s biggest selling magazine – they gave the profits to Nottingham Gay Switchboard. Mushroom was the first venue in Nottingham to hold regular author visits with many events hosting LGBT writers (and authors of LGBT writing): including Armistead Maupin, at the height of his fame; Sunita Namjoshi, whose inventive writing challenged racism, sexism and homophobia; Maureen Duffy, one of the first modern writers of explicitly lesbian fiction; Jeanette Winterson, author of novels exploring gender polarities and sexual identity; and the gay rights activist Jane Rule, who came over on a rare visit from Canada to talk about her book ‘Desert of the Heart’ (1964), which had been adapted for the popular lesbian film ‘Desert Hearts’ (1985).

Ross Bradshaw, then of Mushroom, published Gregory Woods’ ‘This Is No Book: A Gay Reader’ (1994) under the imprint Mushroom Books. Nottinghamshire Rainbow Heritage recognised Mushroom for their service and support for the local LGBT community, awarding them a posthumous certificate in 2012 during that year’s LGBT History Month.

In 1986 there was a lesbian library inside a new Lesbian Community Centre on Mansfield Road. Around the same time the Closet Library opened (‘100 books by and about lesbians’) based in the Lesbian Office at the Lesbian Centre, part of the Women’s Centre on Chaucer Street.

In 1987 the front window of Nottingham’s Central Library featured a lesbian and gay exhibition which was vandalised several times. This was at a time when the AIDS outbreak had encouraged the tabloid media to further demonise gay and bisexual men contributing to the fact that, in this year, three-quarters of the population agreed that homosexual activity was “always or mostly wrong.” This was election time and during the campaign the Conservative MP Jill Knight argued that Labour wanted to glorify homosexual intercourse, giving young children access to gay and lesbian books! Knight, who later campaigned against same-sex marriage, also linked discussion of homosexuality in schools to the spread of AIDS, describing it as “desperately dangerous”.

Knight’s protests led to Prime Minister Margaret Thatcher introducing Section 28 of the Local Government Act 1988 and its enacted amendment which stated that a local authority “shall not intentionally promote homosexuality or publish material with the intention of promoting homosexuality.” Thatcher had been complaining that Labour councils were damaging ‘traditional values’ in promoting same-sex ‘pretend’ parenting and the ‘right to be gay’. Section 28 suited the PM’s anti-gay agenda, and it was the first anti-lesbian law introduced in Britain. Across the country gay-themed literature was removed from library shelves and many positive depictions of LGBT life were gone from schools. Section 28 was not repealed in England until 2003 and in its early years did much to spread discrimination. For example, as a result of the new legislation, the management of the Salutation Inn informed the Nottingham Gay Switchboard group that they were no longer welcome to hold their monthly meetings in the snug bar.

This homophobic prohibition of books and other gay information was opposed and defied by many members of Nottingham’s literary community. Mushroom produced and distributed thousands of double-sided leaflets; on one side was a listing of lesbian and gay writers and gay writing, on the other was the case against Section 28. Working with Nottinghamshire Libraries they also produced a booklist called ‘Unsilenced Voices’, part of a campaign that included readings by Francis King and Adam Mars-Jones plus a performance of Philip Osment’s play ‘This Island’s Mine’ from the Gay Sweatshop. Local libraries produced their own defiant display of the Unsilenced Voices’ books promoted by the late Alan Guest.

In the 1990s, under the nose of Section 28, David Belbin’s YA series ‘The Beat’ introduced PC Gary Monk, the first recurring gay character to feature in a British YA series. The decade was seeing gradual social reforms and the start of incremental law changes that would alter attitudes for the better.

It was in the ‘90s that Narvel Annable published the first of his autobiographic novels described as ‘gay thrillers’. From 1978 to 1995 Annable was a history teacher at Valley Comprehensive School in Worksop, too frightened to come out in what he saw as a deeply conservative homophobic community. This experience informs his latest book ‘Double Life’ (2019) which covers the cruelty of the Thatcher era and the panic of AIDS set against a blighted colliery landscape. His second novel ‘Lost Lad’ (2003) had been inspired by his early gay experiences during adolescence at William Howitt Secondary Modern. Narvel, a campaigner for gay rights, wrote a biography of His Honour Judge Keith Matthewman QC of the Nottingham Crown Court entitled ‘A Judge Too Far’ (2001).

MP Ann Widdecombe, then Shadow Home Secretary, wasn’t happy in 1998 when Gregory Woods was made Britain’s first professor of lesbian and gay studies at Nottingham Trent University. Widdecombe called it “a phenomenal waste of public money”. A spokesman for Stonewall – the UK gay rights charity set up in the wake of Section 28 – said, “There is tremendous ignorance about lesbian and gay issues. This will help redress the balance.”

“Small but pioneering,” was how Professor Woods described his appointment adding, “It’s encouraging that the University has taken what is a slightly brave decision.”

Next time – the final part in our LGBT series focuses on our contemporary LGBTQ+ writers, poets and writing.