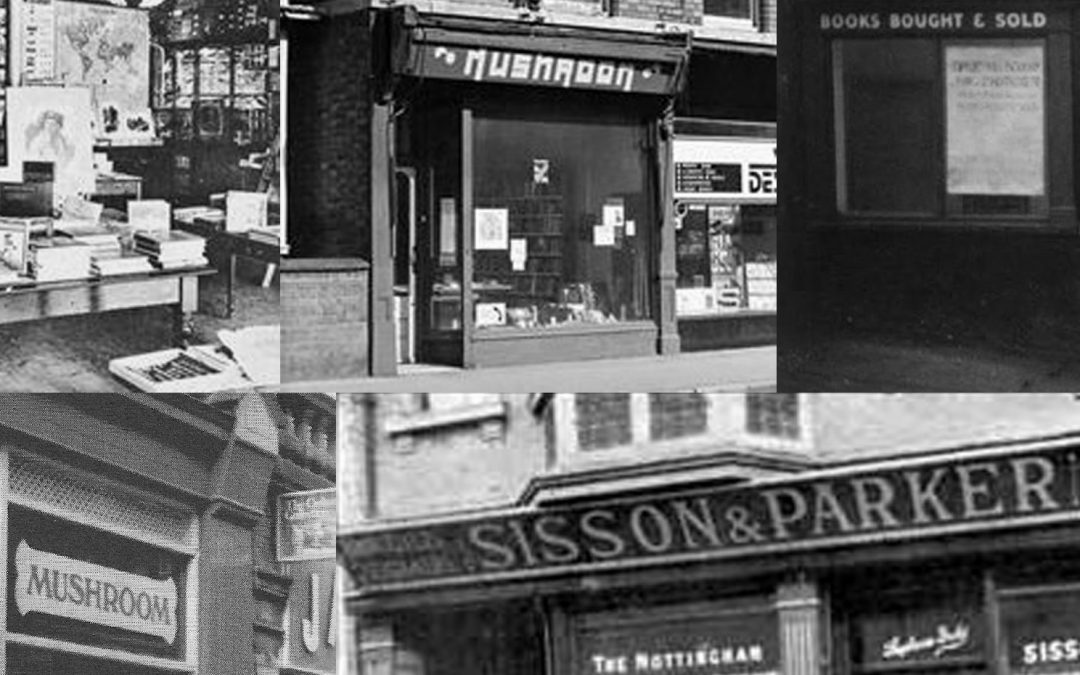 We look back at Nottingham’s bookshops of old, and Henry Normal tells us how Sisson & Parker changed his life.

Trent Bookshop opened in 1964 next to the City Ground on Pavilion Road, West Bridgford. The shop was founded by part-time teachers Stuart Mills and Martin Parnell who wanted an avant-garde outlet for good modern literature in all its forms. The Tarasque Press operated from Trent; co-edited by Mills and Simon Cutts, the 11 issues of Tarasque were published between 1965 and 1971, the first edition featuring work by Ray Gosling. The magazine aimed ‘to be the voice of Nottingham’.

In 1966 Trent Bookshop moved location, becoming Bux near the top of Drury Hill, the ancient street that ran up from Midland Railway Station to the Broadmarsh Bus Station. Bux, unlike Trent Bookshop with its modern art gallery interior, was a dusty little shop painted red with an exposed wood frontage. Covering three floors, and with trestles out in the street, it was said to be a shoplifter’s paradise, but with its piles of books and knowledgeable staff Bux was doing nicely, selling the commercial and controversial. Then plans for the new Broadmarsh forced them to move to Lincoln Street, off Clumber Street. The larger store provided an outlet for Nottingham’s underground culture.

Bux closed in 1972, bankrupt, but having achieved what is set out to do, providing a home for many small presses. Stuart Mills went on to launch ‘Aggie Weston’s’ an occasional magazine which ran to 21 issues between 1973 and 1984, but Nottingham was needing a new independent bookshop.

In 1972 Mushroom bookshop opened, in no. 261 Arkwright Street, a former jeweller’s that had seen better days. Chris Cann and Keith Leonard rented the crumbling premises from the city council, living in the accommodation above. They sold books in the front room and joss sticks, clothes, crafts and other paraphernalia out back. Mushroom’s focus was anti-war, anti-nukes, and anarchism. Advertised through word of mouth this political bookshop became a hub for Nottingham’s radicals. There was a notice board for local campaigns and events, and a ‘free corner’ where books could be left or taken.

When the council began demolishing shops on Arkwright Street it was clear that Mushroom needed a new home so Chris and Keith rented a space on Heathcote Street (no. 15) in Hockley. Business picked up and Mushroom moved over the road to no. 12’s larger premises, later expanding into the second hand bookshop (no. 10) next door. The former site of Mushroom is now taken up by Jam Cafe and Paramount Picture Framing.

Mushroom stocked books that were ‘useful personally and socially, literature that allows people to create their own alternatives,’ according to their annual Christmas/New Year catalogue. A member of the Federation of Alternative Bookshops (which became FRB – radical replacing alternative), Mushroom ran as a collective on non-commercial lines. In 1983 Mushroom won a court case against the police who had seized 41 books from their section on drugs, mainly concerning cannabis. By this time the shop had sections on feminism, gay writing, Black writing, vegetarianism, war and peace and self-help and they had become involved in literary events, bringing authors from far afield to Nottingham audiences for the first time.

In 1994 a large group trashed the shop; damaging equipment, wrecking bookshelves, and injuring a worker and a customer. The group responsible, known as ‘Blood and Honour’, were a fascist group allied to the BNP. An eyewitness said, “We saw some people dressed like skinheads rushing out of the shop and throwing things back into the shop window.” Arrests were made. It wasn’t the only attack made on Mushroom by fascists.

Ross Bradshaw worked at Mushroom between 1979 and 1995, missing the difficult years that followed, with the shop closing in 2000. In 2013 he opened Nottingham’s independent bookshop Five Leaves in the radical tradition of Mushroom.

Nottingham has a history of radical bookshops going back two centuries when lace worker Susannah Wright moved back to Nottingham from London where she’d been charged with unlawfully publishing, and selling the scandalous and blasphemous. Wright had defended herself in court, using the opportunity to assert her right to free expression and calling for the people, not the church, to make the laws. She was indicted for profanity, becoming the only woman to be imprisoned on this charge. After her release, she sold radical publications at Trademen’s Mart (roughly where Argos is now on Lower Parliament Street) then opened a bookshop on Goosegate, Hockley, to much protestation. A riotous mob once smashed their way in but Wright held out. On one occasion, she withdrew a pistol from her counter and calmly asked the threatening yobs if they should like it fired at them. Wright defeated opposition from Rev G Wilkins of St Mary’s Church and the Committee for the Suppression of Vice before moving her successful bookshop to larger premises.

In her book ‘Winter at the Bookshop’ (2019) Sylvia Riley tells of Pat Jordan’s place on Dane Street, St Ann’s, home to the International Group founded by Pat, Ken Coates and Peter Price in 1962. The Bookshop, which also sold comics, was home to revolutionary groups and local movements. Not far from here was a large bookshop, on Alfred Street Central, that sold pricey pin-up books and doubled as a brothel. Around the corner was Orange for Books which dealt for a different kind of tackle – fishing.

There was the radical Concord Books, a small shop owned and run by the late David Lane, a committed pacifist and vegan. The now demolished Concord was at the Mansfield Road end of Woodborough Road. After the shop closed David Lane became a national wholesaler for vegetarian/vegan books and green books. There was another political bookshop near the present Trent University’s student’s union building.

In the 1970s, back when he worked for an insurance brokers off Slab Square, the writer, poet, film producer and Nottingham Poetry Festival co-founder Henry Normal used his lunch hour to scour our city centre bookshops for any comedy books he’d not read. It was from these books that he learned how jokes were constructed and discovered their mathematics and musicality.

He tells us, “The Marx Brothers scripts I loved, and biographies of great comics like Jack Benny or Abbot and Costello. I loved the fact that Abbot and Costello, who became the first millionaire comedians, were so poor when they first started that they had to sneak into a field and milk a cow for something to drink. I read many non-comedy books, too, including Alan Sillitoe’s ‘Saturday Night Sunday Morning’ and ‘The Loneliness of the Long-Distance Runner’. I could relate to both of these having been born in St Ann’s and with my dad and my brother both working at Raleigh.”

Henry Normal’s favourite Nottingham bookshop was Sisson & Parker. “It was like WH Smith but as though run by Grace Bros. A posh old-fashioned shop that also sold Parker Pens and desk tidies.”

He once applied for a trainee position at Sisson & Parker. He’d spotted the job in the Evening Post and managed to get an interview. However, “It became apparent the interviewer took one look at me and decided I wasn’t their type. He asked me the strangest question: ‘Do you play football?’ I told him I did and loved to watch Forest. This seemed to seal my fate. He asked no more questions and I was told he had more candidates to see. I never heard from them again.”

For months that question ate away at Henry: “What was it that he thought he saw in me that meant I wasn’t the type that would be right for a job working with books? I worried that I was pigeonholed and discarded. There was something at the time that felt unfair. Was it my working-class Nottingham accent? My Burton’s suit? My schooling?”

“It made me set my jaw to succeed,” he says. “I was determined to make my way in the world and do it by being myself. I joined a writers’ group at Angel Row Library that was part of the Worker Writers’ Federation. The now famous screenwriter Jimmy McGovern was a member of the sister group in Liverpool. The UK groups had an annual conference at Nottingham University where I read some poems that seemed to go down well. This encouraged me to keep writing and performing, which I did at any chance I could in the pubs around Nottingham. The Black Boy, The Thurland Arms even the bar at the Nottingham Playhouse were host to poetry events in which I tried out material.”

Henry went on to perform around the country, learning his trade on bills with the likes of Seamus Heaney and John Cooper Clarke. In addition to his comedy writing and TV scripts Henry has written several books, mostly poetry and comedy stocking fillers like those he loved to read in Nottingham. He sometimes thinks back to that interview at Sisson & Parker and wonders, “If I’d have got that job where would I be now?”

A Sainsbury’s Express now occupies the former home of Wheeler Gate’s Sisson & Parker (1897-2005). Sisson & Parker (Est 1854) moved to this former hotel from no. 13 where it sold novels and dictionaries, later supplying textbooks for schools and colleges as well as religious books and stationery. They also housed a lending library in their grand premises, where they remained until the early 1980s. At one time there was a second hand bookshop next door.

Another bookshop, Hudsons, replaced Wheeler Gate’s Sisson & Parker and before the decade was out Dillons had moved in. Dillons was well-stocked and covered several floors. It folded in 1999 and, as with many of their stores, Waterstone’s took over the premises. Nottingham soon had two large Waterstone’s bookshops within close proximity and something had to give. The writing was on the wall (or literally the floor) for the Wheeler Gate store which never did change its Dillons-branded carpet.

Nottingham had another branch of Sisson & Parker, a small paperback shop opposite the Victoria Centre Clocktower, on the corner where you’ll now find a branch of PC World.

The most recent edition to our lost bookshops is Jermy & Westerman whose shell remains at 293 Mansfield Road. Established in 1978, the bookshop was owned by Geoff & Richard Blore (father and son) from 1987 and was a treasure chest of antiquarian books of local relevance. The shop was one of the host venues for the Nottingham Poetry Festival 2017, with performances from Nottingham poets Andrew Martin, Trevor Wright, Rosie Garner and Henry Normal.

And there’s more, like Penguin Books on Bridlesmith Gate. From Sven’s Books (an adult bookshop on Talbot Street then Mansfield Rd) to the Christian Bookshop inside the Congregational Centre (on Castle Gate), Nottingham has many lost bookshops and we’d love to hear about them. Please let us know your memories via Twitter @NottmCityofLit #NottmLostBookshops

Mushroom Bookshop founder Chris Cook Cann recently published ‘Face Blind in Berlin, Suffolk and Gedling’ which tells of her time at Mushroom and her charity work as one of the Masked Booksellers. Cann’s memoir is of a life of protest and literature that takes several unexpected turns.

For even more on Mushroom, including information about the attack and the chance to read their winter catalogues, visit Sparrows’ Nest Archive.

‘A Normal Family: Everyday adventures with our autistic son‘ (2018) by Henry Normal.

Henry Normal’s latest book is about his family and autism. It was published by Two Roads, part of the John Murray publishing group who published important work by Lord Byron and Charles Darwin, “So I thought I’d be in good company,” said Normal. “Then I noticed looking further down the list, they also publish Pam Ayres, so I quickly realised for which end of the market I was destined.”