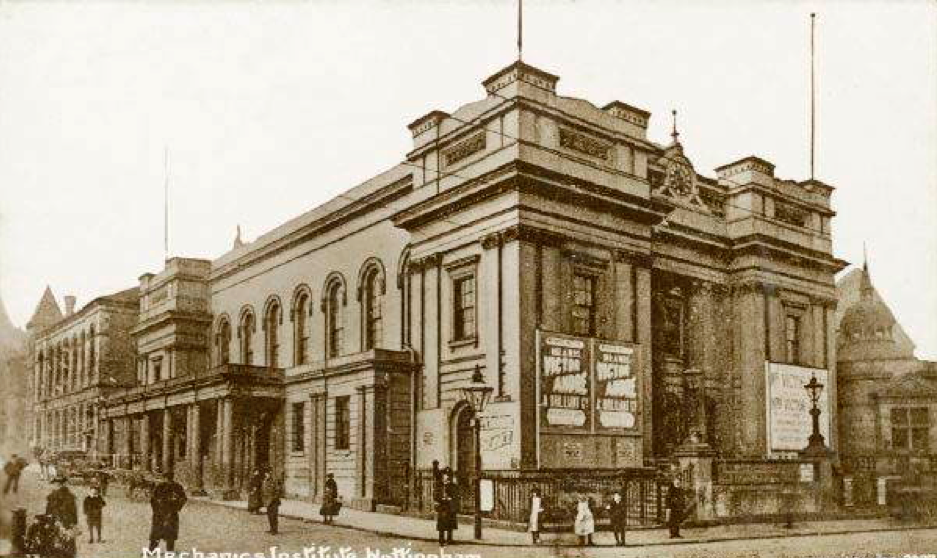 The idea of the Mechanics Institutes came in the late 18th century when two professors at the University of Glasgow started offering free lectures to the city’s workers. A book by Henry Brougham addressed to the working classes and their employers, entitled Observations Upon the Education of the People, helped to popularise the institutions. Founded in 1837, the Nottingham Mechanics’ Institution arrived with the intention of improving the knowledge of the city’s working men, with classes, lectures, performances and a library; and by 1845 the NMI opened its own Hall at the junction of Milton Street, Burton Street and Trinity Square, opposite the original entrance to Victoria Station. Its library contained 40,000 volumes.

Many famous literary men and women performed at the Hall including Oscar Wilde (twice), Anthony Trollope, Jerome K Jerome, G K Chesterton, Marie Corelli, Fanny Kemble, Sir Arthur Conan Doyle and Charles Dickens. Dickens first visit was in 1852 by which time he was a celebrity and halfway through his ninth novel Bleak House. It was at this point in Bleak House that the character Inspector Bucket appears, arguably the first professional detective in English crime fiction. I mention this because joining Dickens on stage in Nottingham was Wilkie Collins who went on to write The Moonstone, considered by many to be the first detective novel and first serialised in Dickens’ magazine All the Year Round. Dickens and Collins were performing at the Mechanics as part of a travelling company called the ‘Guild of Literature and Art’, a charity group that Dickens had founded. Dickens and Collins had met a year earlier during a production of Not So Bad as We Seem, a drama by Dickens’ friend Edward Bulwer-Lytton.

Charles Dickens referred to his group as ‘the amateurs’ and they toured halls or lecture rooms rather than provincial theatres. There was nothing amateurish about their staging and scenery. As usual, Dickens and his group arrived the day before the show, to set up their portable theatre. Their arrival wasn’t well received by the Nottingham Wesleyan Reformers who were in the middle of their Sunday morning meeting at the time.

Showtime was Monday evening 7pm. Among the audience was Charles Dickens’ wife Catherine and her sister Miss Hogarth. ‘The amateurs’ opened with the aforementioned Not So Bad as We Seem with Wilkie Collins standing out in what proved for the audience a generally perplexing performance.

The next act went down much better, a farce called Mr Nightingale’s Diary, written by Dickens and Mark Lemon – founder and editor of Punch – who was also in the cast.

Charles Dickens (as Gabblewig): “Has anybody seen that puppy of mine – answers to ‘Tip’ – with a gold-lace collar? (Dickens Enters) O’ here you are! You scoundrel, where have you been?”

Wilkie Collins (as Lithers): “Good gracious me! Why if it ain’t Mr. Gabblewig, Junior!”

Also in the cast was John Tenniel (Punch cartoonist and illustrator of Alice in Wonderland) but as they ended at midnight with a one-act performance of Past Two O’clock in the Morning, it was Dickens who had taken on the most characters, male and female, old and young, the audience offering a cheer when their favourites appeared. Dickens’ successful evening ended at Nottingham’s oldest hotel The George in Hockley/Lace Market. Now known as Mercure Hotel there are suites named the ‘Charles Suite’ and the ‘Dickens suite’. On display is the cheque with which he paid his bill.

The following day Dickens and his troupe walked 16 miles to Derby where their Mechanics Institute Lecture Hall awaited and what was to be another triumph for the writer come theatrical impresario. His next visits to Nottingham would be quite different.

During this same month in 1852 Dickens visited Ada Lovelace. Byron’s daughter had previously attended dinners at Dickens’ London home but this time he travelled to her. Lovelace was seriously ill from uterine cancer, practically on her deathbed, when Dickens obliged her request that he read her favourite scene from his 1848 novel Dombey and Son. He read the passage, in which the gentle 6-year-old boy Paul Dombey dies, his cold, arrogant, business-obsessed father in attendance:

`There! at the bottom of the bed.’

`There’s nothing there, except Papa!’

The figure lifted up its head, and rose, and coming to the beside, said: `My own boy! Don’t you know me?’

Paul looked it in the face, and thought, was this his father? But the face so altered to his thinking, thrilled while he gazed, as if it were in pain; and before he could reach out both his hands to take it between them, and draw it towards him, the figure turned away quickly from the little bed, and went out at the door.

Paul looked at Florence with a fluttering heart, but he knew what she was going to say, and stopped her with his face against her lips. The next time he observed the figure sitting at the bottom of the bed, he called to it.

`Don’t be so sorry for me, dear Papa! Indeed I am quite happy!’

Ada Lovelace died three months after Dickens’ visit. The scene he had read to her, from Dombey and Son, was to be the next work he performed to a Nottingham audience.

In 1853 Dickens had given a solo reading of A Christmas Carol in Birmingham suggesting a second lucrative career as Dickens realised there was money to be made from reading his own work. In October 1858 he was back at the Mechanics’ Hall reading scenes from Dombey and Son and The Trial of Mr Pickwick. As before, he arrived early to inspect and prepare but this time the scenery was replaced by a simple platform with a maroon-curtained screen which curved behind him hiding the orchestra. When reading, Dickens took to a raised block and stood alone behind a red stand, his elbow resting on a shelf designed for his glass of water. He began with instructions for the audience: “If you feel disposed as we go along to give expression to any emotion, whether grave or gay, you will do so with perfect freedom, and without the apprehension of disturbing me.”

In both readings Dickens read scenes that he had adapted from his original work, changes that were crafted to allow him to possess his characters in the most dramatic manner. Largely reserved, the Nottingham audience did laugh during The Trial of Pickwick but when he returned the following October, the attendance was down. The smaller crowd may have been because the same readings were advertised or perhaps people were waiting for his telling of A Christmas Carol set for the following afternoon. After reading Dombey and Pickwick the night before, Dickens cancelled his planned reading of A Christmas Carol stating that he had been “unavoidably impelled to return to London.”

In 1867 a fire damaged the Mechanics’ Hall but two years’ later a new 110 ft long hall opened, with double the seating capacity. A month after the rebuilt hall had opened Dickens returned, to give his last Nottingham performance, part of his farewell tour. The advice was clear: ‘On no consideration will Mr Dickens be induced to appoint an extra night in any place in which he shall have been announced to read for the last time’.

On this occasion the audience was full and appreciative, absorbed throughout Dr Marigold as Dickens played the cart-pushing hawker of sundries, and roaring their approval and laughter during The Trial of Pickwick – and paying up to seven shillings for the honour. Dickens put his heart into his performances. His energetic, at times manic, stage-managed shows were so in demand on both sides of the Atlantic that they gave birth to ticket touts. Capitalising on this success he undertook gruelling tours that affected his health as he inhabited his characters in ways that could be frightening to witness. Dickens died in 1870, a year after his final Nottingham reading.

In #41 of our literary locations’ series I focused on how a boy’s experience in Notts influenced the writing of Oliver Twist and I continue to find out more links between Dickens and our great city of literature. The new Mechanics’ Building on North Sherwood Street (purpose-built in 2003) houses a superb bust of Dickens, just randomly placed in the corner of a room. The Nottingham branch of The Dickens Fellowship is one of only two branches that has operated continuously from its inception; John Lucas authored The Major Novels (1992), a critical study of five major Dickens’ works; Michael Eaton adapted Dickens for BBC Radio (The Pickwick Paper, 2004), (George Silverman’s Explanation, 2003) and he adapted Great Expectations for the stage; and a BBC television adaptation of Great Expectations was filmed (in part) at Nottinghamshire’s Thoresby Hall.