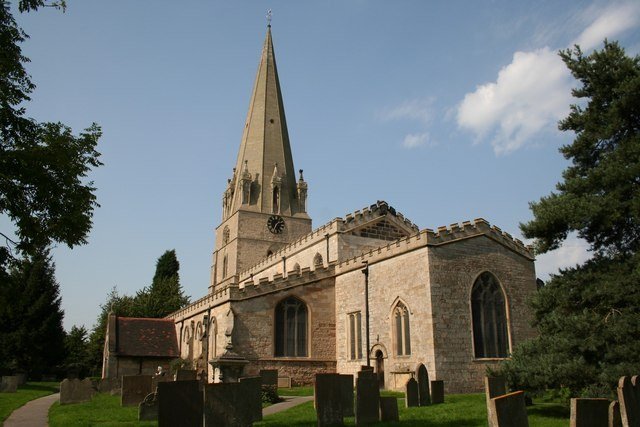 Clergyman and cricketer Henry Hayman and his family moved from Nottingham’s St Andrew’s Church to Ruddington after he became vicar there in 1877. A year later they were joined by Hayman’s father-in-law Dr Ebenezer Cobham Brewer who had moved up to Notts after his wife died.

Hayman remained Vicar of Ruddington for seven years before he and his wife, their children, and her father Ebenezer, all moved to the vicarage at Edwinstowe. Ordained forty years previously, Dr Ebenezer Cobham Brewer helped out with the preaching and the children, regaling them with his stories and experiences and paying regular visits to the village school. Cobham Brewer was a mine of information as his millions of readers could attest.

His 40 or so books included ‘A Reader’s Handbook to Literature’ and the famous ‘Brewer’s Dictionary of Phrase and Fable’, a book that had been under consideration for 20 years before its publication. The publisher, Mr Cassell, thought it a “doubtful speculation, quite beyond the wildest reach of the imagination” but his demands that it was “not too learned” were heeded and the book became a huge seller. First published in the 1870s it has received many updates and Cobham Brewer spent much of his time in Notts revising the book.

On the walls of his room at the Edwinstowe vicarage, Cobham Brewer had stuck lots of paper which he used to write notes on. He’d a lifelong habit of making notes which he typically kept in bundles of slips arranged alphabetically. “The labour of all this writing out and indexing has been very great, though a labour of love for me,” he wrote. It was a love he retained well into his 80s and he’d often refer to them when working into the early hours of the morning. His advice for a long-life – “Little to eat, less to drink, little sleep and plenty to do” – served him well. Gardening, he once said, was his only vice.

Cobham Brewer graduated in Law in 1836. From Trinity Hall, Cambridge, he returned to his home of Norwich to work at his father’s school succeeding him as Headmaster. During this time, Cobham Brewer had been compiling his ‘Guide to the Scientific Knowledge of Things Familiar’ which was first published around 1840. Money from this best-seller allowed him to travel through Europe – and make his notes. In the 1850s he joined the publisher Cassell.

John Cassell’s first publication was ‘The Standard of Freedom’, a weekly newspaper that advocated religious, political, and commercial freedom. Cassell began publishing serialised work with affordable sections (1 penny a week), making them accessible to the masses. With other volumes aimed at children, Cobham Brewer wrote his 12-book series ‘My First Book of….’ in which a different subject was explored each time.

Many educational books came from the pen of Cobham Brewer who said: “The Phrase and Fable Dictionary and the other books of that class may be said to be merely different sections of one gigantic commonplace book”. After his death, the ‘Brewer’s’ name continued to be attached to new works and, incredibly, more than 200 years after his birth, new versions of his most famous dictionary are still being published. In 2018, the 20th edition of ‘Brewer’s Dictionary of Phrase and Fable’ was released, edited by the dame of dictionary corner Susie Dent.

It was in the Edwinstowe Vicarage that Cobham Brewer took his last breath. He had ended his days writing and enjoying his family’s company as well as taking an interest in St. Mary’s Church. The church’s restoration work, that he had followed keenly, was completed just after his death in 1897. He is buried in the churchyard a short distance from the west side of the tower.

The parish church dates from the 12th century. The first stone building in Edwinstowe, it was built on the site of a church from 633 AD. Local legend will tell you that it was here at St Mary’s Church that Robin Hood and Maid Marion were married. Now that’s folklore that Cobham Brewer would have enjoyed.