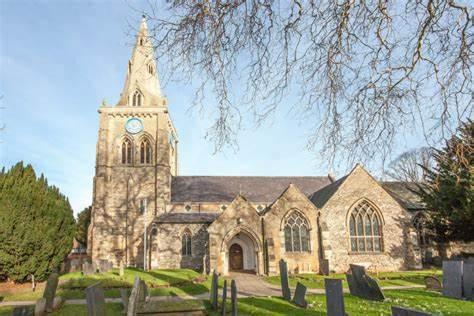 The attractive market town of Bingham, once a great meeting point, houses much history in its oldest building St Mary and All Saints, the parish church. Replacing a Norman church, much of the current St Mary’s was built between 1220 and 1320, an impressive achievement by Bingham’s small community, with support from the lord of the manor Sir Richard de Bingham who came from a family of wealthy Nottingham wool merchants. Knighted by King Edward I, Richard de Bingham served as Sheriff of Nottinghamshire and Derbyshire in 1302 and was later appointed to survey Nottingham castle. He is buried inside the church near the main altar. Inside the church is his fine stone tomb, marked by the effigy of a cross-legged knight, which was carved in Normandy.

After the de Bingham family fell into poverty, the Rempstones became the new lords of the manor and they continued to improve the church. John Rempston’s son Thomas Rempstone is an important historical figure and the bard’s Nottingham Knight.

Sir Thomas Rempstone was Knight of the Shire for Nottinghamshire, which he also represented in parliament, and he served as Sheriff of Nottinghamshire, but he is best known for his service to the nobleman Henry, Duke of Lancaster. Rempstone assisted in forcing the abdication of Richard II in 1399, and by doing so, he put his friend Henry on the throne. Rempstone was rewarded by King Henry IV with property in Bingham. This story is recounted in Shakespeare’s Richard II. In act ii. scene i. The bard’s Sir Thomas Rempstone is named Sir John Ramston.

Sir Thomas’ close friend was Henry Bolingbroke, son of John of Gaunt. Richard II had exiled his cousin Henry and, after John of Gaunt died, confiscated Henry’s inheritance. In 1399 Sir Thomas joined Henry in France, one of the fifteen lances that returned to England to set about reclaiming his land and fortune. After capturing King Richard, Henry appointed Sir Thomas Rempstone as Constable of the Tower of London. He was there to oversee the royal prisoner and witness his abdication. Other positions bestowed on Rempstone – he was made a Knight of the Garter and member of the Privy Council – all contributed towards his wealth and extensive land which included Bingham Manor.

Sir Thomas, who had been titled Admiral of the Fleet, accidentally drowned in the River Thames in 1406. His body was brought back to Bingham’s St Mary & All Saints Church for burial and he is to be found in the chancel. There’s a worn floor-stone there on which part of the engraved portraits of Sir Thomas and his wife remain

William Shakespeare’s play Richard II portrays the king’s misrule and deposition by Henry Bolingbroke as being responsible for the Wars of the Roses. Sir Thomas Rempstone (as Sir John Ramston) appears in the famous and oft quoted speech by John of Gaunt, regarded as an invocation of English patriotism. Shakespeare’s romantic or idyllic phrases “this scepter’d isle” or “[t]his blessed plot, this earth, this realm, this England” precede the moment that Sir John Ramston is mentioned as one of the knightly lances,

“All these well furnish’d by the Duke of Bretagne

Are making hither with all due expedience

And shortly mean to touch our northern shore”

It was another king, Henry VIII, that brought on the most dramatic of changes to Bingham’s fine church with The Reformation, and it was the Notts writer Thomas Cranmer, Henry’s Archbishop of Canterbury, that was in charge of the ecclesiastical reforms. Cranmer, who would later compile the Book of Common Prayer, came from nearby Aslockton and may well have received his early education in the school based inside the church. A letter survives (from 1533, the year Cranmer became the Archbishop) that is written by Cranmer to his sister in Radcliffe-on-Trent, recommending to her the school run by the Bingham rector the Rev John Stapleton.

In the late 19th century, the rector’s wife Mary Miles was a well-known painter, as was her son Frank Miles. One of his muses, Lily Langtry, visited the Miles family at Bingham Rectory along with Oscar Wilde.

The writer James Kirk Prior is buried in Bingham’s cemetery, near railings alongside Grantham Road. His headstone reads:

James Prior had lived in Bingham from 1891 to 1922, at first in 19 Fisher Lane, at a home called Lushai Cottage (previously named Brusty Cottage) then at the neighbouring the Banks – at Banks Cottage – where he died. Much of his time in Bingham was spent as a social recluse, his eyesight failing him. Prior’s daughter Dorothy continued to live at Banks Cottage until 1978 when she died aged 87.

James Prior was born in 1851 in Mapperley Road near the centre of Nottingham. His parents had a millinery business on Peck Lane, Hounds Gate and Pelham Street but Prior rejected hat-making and law (after leaving school he had become a solicitor) preferring to study language and literature, a decision that angered his father. By the age of 27 Prior had little to show for his literary efforts so he took up a teaching position at a boarding school. After his father died, he became involved with his uncle in a farm business but the money dried up. As it turned out, this would not be a wasted five years as the experience would inform Prior’s most famous novel ‘Forest Folk’.

After marrying his cousin Lily Kirk, he returned to Nottingham, living in Radcliffe-on-Trent before heading to Bingham where all his important work was written. His first published novel ‘Rennie’ was followed in 1897 by the excellent ‘Ripple and Flood’ about the Trent. Then came ‘Forest Folk’ in 1901 set during an eventful period of history that covers the Napoleonic Wars and Luddite riots. The all-important follow-up to the successful ‘Forest Folk’ was the disappointing ‘Hyssop’. Arguably his best book ‘A Walking Gentleman’ came three years later but by then his reputation was tarnished. Prior’s last published work was ‘Fortuna Chance’, a sectarian story set in the 1720s. The author was granted a small pension in recognition of services to literature.

Prior has been called the “Thomas Hardy of Nottinghamshire” and comparisons can even be made to D. H. Lawrence who shared a publisher with Prior and rated, if pitied, the author. Lawrence wrote, “What a curious man James Prior is!” and wondered why Prior was a ‘failure’. A good decade before Lawrence, Prior was writing about Notts (its people and countryside), England’s changing landscape (natural and political) and class differences, and often with the local vernacular. Another Notts scribe, J. M. Barrie, commented that James Prior was a ‘fine writer’, but Prior never got the recognition his talent deserved despite a pub being named after his most famous novel. The Forest Folk pub/hotel in Blidworth had an area in its entrance room dedicated to Prior containing his memorabilia and a stained glass window.

I were born an’ bred I’ th’ forest, and lay mysen to die here; it’s a fairish ordinary sort o’ soil to live on an’ be buried in.