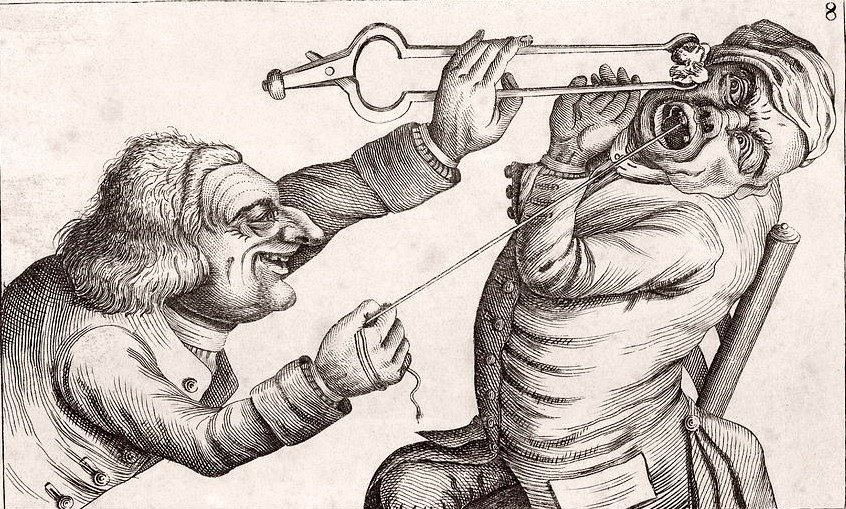 In the Library of the British Dental Association in London is a copy of ‘A Treatise on the Disorders and Deformities of the Teeth and Gums’, arguably the first scientific written work on Dentistry. This early paper, a treatise on the treatment of teeth, was written in 1768 by the 28-year-old Nottingham man Thomas Berdmore, King George III’s personal ‘Operator for the Teeth’.

In this valuable treatise, in which Berdmore wrote that sugar was bad for the teeth, he describes the most rational methods of treating diseases of the mouth, using example cases and experimental work to illustrate his techniques. Not an easy read for dentophobics, Berdmore writes about visiting a young woman in a “terrible state” after a botched extraction. The offending tooth had easily been removed but her practitioner had accidentally pulled out “a piece of jawbone as big as a walnut and three neighbouring molars.”

The text book became influential and it was adopted by his fledgling profession with editions published in London, Ireland and America. Several translations followed as the work grew in reach and reputation. This was at a time when the care of teeth had only recently become a specialism. In the mid-18th century, dentistry was usually the responsibility of barber-surgeons, called upon for tasks as varied as cutting hair to amputating limbs.

Thomas Berdmore was born in Nottingham in 1740. He came from a family of Nottingham clergymen, his father being the Rev Thomas Berdmore, former vicar of St Mary’s Church in the Lace Market, but young Thomas’ calling was a medical one. Aged 15 he became apprentice to surgeon Mark Skelton of Sheffield. By the age of 20, he was in London, working in the firm of Samuel Rutter and William Green ‘Operators for Teeth’. Rutter and Green had been looking after King George II’s teeth and they introduced Berdmore to court life. In 1760, following the King’s death, they took on their new royal client, King George III. As Green’s young apprentice, Berdmore assisted the firm but it wouldn’t be long before he was the king’s personal dentist. This was because within four years both Rutter and Green had died, leaving Berdmore to head up the firm. Now in his mid-20s and having passed his examinations at Surgeons Hall, Berdmore acquired the lucrative practice and retained his royal client. He was ready to cash in.

By this time the Surgeons’ Company – the first professional body for dentistry – had been established and Berdmore was a member. The writer continued to be the official surgeon general and teeth drawer to both His Majesty and his son, the Prince of Wales, whilst continuing his dental business. His wealth allowed him to travel and, in 1784, when in Paris, the ‘celebrated dentist’ crossed paths with Benjamin Franklin.

By the time he died of stomach gout, aged 45, Berdmore was a rich man. His death occurred in London’s Fleet Street but not before he’d written a detailed will. The childless bachelor left money to his housekeeper and friends but the majority of his £50,000 went to a baby, his namesake and nephew Thomas Berdmore. He also stipulated that his body should be buried in Nottingham beneath the chancel in St Mary’s church as this was where his father, uncle and grandfather had been laid to rest, and he even wrote the inscription for his memorial stone: “Near this place lies the remains of Thomas Berdmore, who acquired an ample and liberal fortune by toothdrawing” but this was later edited. Perhaps his family didn’t like the word toothdrawing and its associations. The slab of marble can still be found on the church’s north wall near the west window.

The body of Thomas Berdmore was brought from London in an elegantly decorated hearse to The White Lion Inn on Cow Lane (now Clumber Street), one of Nottingham’s most important venues. A sign for The White Lion used to hang from a great beam which crossed Cow Lane. Established in 1684 the coaching inn was a popular social venue with enough space for travellers to park up. On the occasion of Berdmore’s arrival, two coaches of mourners and a large train of carriages and horsemen pulled into The White Lion. The building is long gone but a 19th century rebuild remains in the shape of The White Lion Hotel. It retains its fine etched glass windows despite being an ‘amusement’ arcade.

Berdmore’s funeral procession gathered outside The White Lion and made their slow journey up to St Mary’s. The streets were lined with mourners, the numbers boosted by the Berdmore family’s strong connection to Nottingham and St Mary’s Church. Six clergymen supported the coffin, in recognition of the former ministers connected to the church. It wasn’t just Berdmore’s father that had been a key figure at St Mary’s, his uncle Scrope Berdmore – whose portrait hangs in the church – and grandfather Samuel Berdmore had also been reverends there.

Thomas Berdmore was a surgeon fit for a King, and another writer from Nottingham who shaped the world (of dentistry).