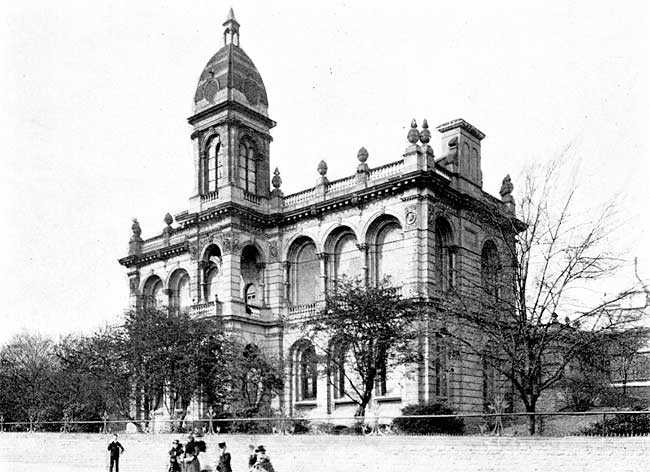 In 1863 a site was purchased on Nottingham’s Waverley Street for the building of a new school, and work shortly began on the Nottingham School of Art, now part of NTU.

Three of the school’s former students have gone on to make great strides in illustrated storytelling. You may not know their names but you’ll know some of their creations.

Thomas Henry Fisher was born in Eastwood in 1879, his family moving to Nottingham soon after, and it was here that he attended the School of Art (then called the College of Art). As a 15-year-old student Thomas Henry, as he became known, began to work for the ‘Nottingham Guardian’ and it was for the ‘Football Post’ that his cartoons were first published. Representing the local teams, he created the characters Forester, Magpie and Stag, regular cartoons until the late 1960s. By the time he lived in Cotgrave and then Plumtree, Henry was having his sketches featured in ‘Punch’ after impressing the satirical magazine with a drawing he’d made of his brother. Another break came when he took over as the artist on the Ally Sloper comic strips. The paper ‘Ally Sloper’s Half Holiday’ called itself “the largest selling paper in the world” shifting copies to working class men and gaining a cult middle class following. Sloper, an archetypal lazy schemer, was often depicted dodging his creditors.

Critical acclaim accompanied Henry’s work with The Royal Academy and the gallery at Nottingham Castle displaying his art. He also worked on the famous Player’s Cigarettes’ Sailor’s head, used on the packets for Nottingham-based firm John Player’s. The image on the Navy Cut packet is referred to by Ian Fleming in his James Bond novel ‘Thunderball’. In the chapter ‘Cardboard Hero’ Domino tells Bond she’d like a packet of Player’s before going into a dreamlike state, creating a lengthy backstory for the iconic sailor on the front of her packet, portraying him as her one true love, the man of her dreams and the first man she ever sinned with.

By 1920 Thomas Henry had established himself as an illustrator for many leading publications including the ‘Strand Magazine’ and ‘London Mail’, saucy postcards and children’s books, but Henry is best known for illustrating the 33 book ‘Just William’ series which chronicled the adventures of the unruly schoolboy William Brown. First published in 1922, Richmal Compton’s popular ‘Just William’ stories followed an impish eleven-year-old schoolboy. Crompton’s grubby kneed, unruly haired, grinning character was brought to life by Henry for nearly 50 years. Throughout this time Henry also crafted other characters in the stories including Violet Elizabeth Bott, William’s flame haired nemesis and the spoiled daughter of the local millionaire. The characters changed little but the stories adapted to meet the time and settings right up to 1970. Henry’s writer-illustrator relationship with Richmal Crompton lasted for 43 years but they met only once, at a book festival in Nottingham in 1958.

By the age of 11 Tom Browne worked as an errand boy in the Lace Market before taking an apprenticeship at a firm of lithographic printers where he began moonlighting, sketching cartoons, one of which he sold to the comic paper ‘Scraps’. The Nottingham School of Art honed his skills before he moved to London producing full-page strips and magazine illustrations for ‘Punch’ and ‘The Tatler’. In an 1896 edition of ‘Chips’, his characters Weary Willie and Tired Tim first appeared. Browne’s loveable tramps became a regular feature, making the front cover of ‘Chips’ for 57 years.

The famous striding upper-class character used as the logo for Johnnie Walker whiskey was another of Browne’s creations but it’s his comedic wandering tramps that have had the most enduring influence. From ‘The Beano’ and ‘The Dandy’ to Charlie Chaplin’s famous little tramp with his ill-fitting jacket, many creations have followed suit. Chaplin said, “I started the tramp to make people laugh because those other old tramps, Weary Willie and Tired Tim, had always made me laugh.”

Browne and the writer Robert Machray depicted the inequality and poverty of London in the book ‘The Night Side of London’, for which Browne produced 95 illustrations that captured the era. Browne returned to Nottingham and in 1897 he used the profits from his sketches to set up a lithographic colour printing firm that ran as Tom Browne & Co. until 1954. Browne’s art inspired other many cartoonists and illustrators with his way in which his characters communicated nonverbally, through their postures, mannerisms, gestures and facial expressions. His style can be seen in the work of Dudley D Watkins, another graduate from Nottingham’s School of Art, and a fellow founder of the Sketch Club of Chelsea.

Dudley Dexter Watkins moved to Nottingham in 1910 when he was three years old. Before attending the School of Art he’d already had illustrations published in ‘The Beacon’, the in-house magazine of Boots the Chemist. When in 1936 D. C. Thomson launched a comic supplement to the ‘Sunday Post’, Watkins created the illustrations for R. D. Low’s ‘The Broons’, about a working-class Scottish family who live in a tenement flat, and ‘Oor Wullie’, about a mischievous spiky haired, dungaree wearing, nine-year-old lad. Both strips were hugely popular and still exists in bi-annual album form.

A couple of years later Thomson’s publishing released their first kids’ comics ‘The Dandy’, for which Watkins drew Desperate Dan, and ‘The Beano’, for which he created Lord Snooty and Biffo the Bear. Watkins’ later characters included Mickey the Monkey for ‘The Topper’ and Ginger, done for ‘The Beezer’. So important was Watkins’ work that during the Second World War he was allowed to work his national service in a way that wouldn’t prohibit him continuing with his drawings, and from 1946 onwards Watkins was given the unusual privilege of signing his work.

Watkins also produced serial comic adaptations of classic novels with ‘Oliver Twist’ and ‘Treasure Island’ among his efforts. His intention to produce the bible in comic form died with him in 1969.

In Thomas Henry, Tom Browne and Dexter Dudley Watkins, Nottingham and its School of Art has shaped the world of comic strips as we know them. Another reason why Nottingham is a City of Literature.