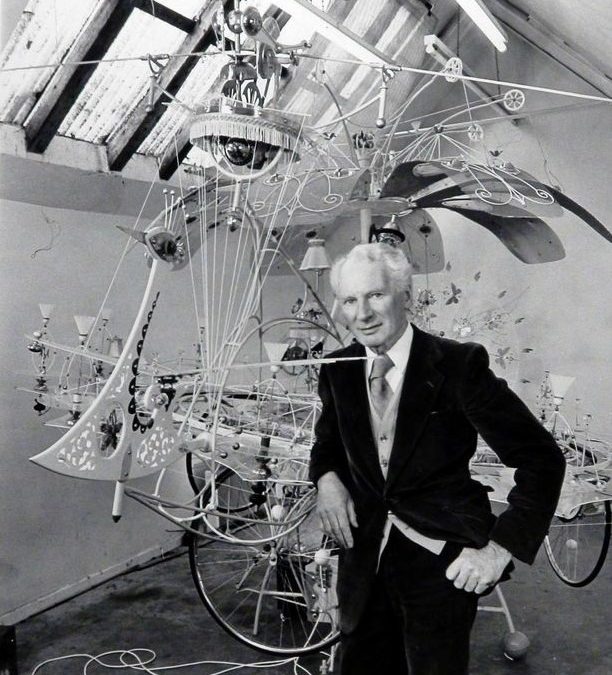 To many, Emett is known as the creator of the car and other inventions in the 1968 film ‘Chitty Chitty Bang Bang’. To others, he’s the inventor of ‘Emettland’, ‘Much Baking Halt’ and ‘Featherstone Kite’, mechanical devices that capture the imagination. For Nottinghamians, he is known for his clock and fountain, a place to meet in the Viccy Centre. The legendary structure used to be near Boots/John Lewis but is now down the other end having had a clean.

A regular cartoonist for ‘Punch’, Emett sold his cartoons whilst working as an advertising illustrator, only to have his career postponed by the Second World War when he was drafted to the Air Ministry. Continuing to produce cartoons he added book illustrations to his repertoire and produced a book with his wife Mary entitled ‘Anthony and Antimacassar’ with wonderfully whimsical drawings of trains, depicting the adventures and travels of Antimacassar in a work of comic art.

Other illustrated books, ‘Emett’s Domain – Trains, Trams and Englishmen’, ‘Engines, Aunties and Others’, ‘Sidings and Suchlike’, ‘Far Twittering’ and ‘Emett’s Ministry of Transport’ followed. First editions in good condition are quite a find.

In 1954 Emett was commissioned to tour America sketching his impressions as he went along producing a colour spread in Life magazine. For this he was paid enough to buy a cottage in Ditching where he and his wife settled and he created his ‘phantasmagorical’ inventions. When Ian Fleming’s story ‘Chitty Chitty Bang Bang’ was set to become a musical film with a Roald Dahl screenplay, Emett got to work on the inventions of Caractacus Potts.

Impressed by the film’s brilliant props Nottingham called and Emett was asked to create an installation for the new Victoria Centre opening in 1973. The result was the ‘Emett Clock’, ‘Rhythmical Time-Fountain’ or ‘Aqua Horological Tintinnabulator’ (the choice is yours). It’s a wonderful moving sculpture that looks down over shoppers and acts as a popular meeting place. The 23 feet tall kinetic sculptor is a combination of jets and metal rotating animals. It keeps time with the playing of the tune Gigue n Rondeau II.

In 1978, Emett was awarded an OBE for ‘Services to Art and Science’. His services to Nottingham haven’t been bad either.