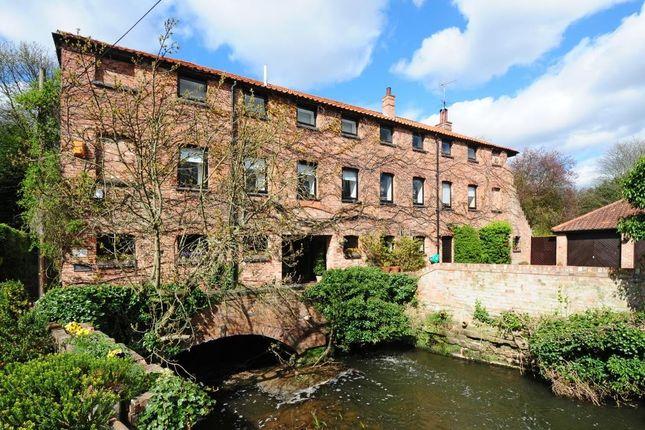 There’s a large three storey red brick house near Lowdham. This private home and footbridge is Grade II listed and used to be the notorious Lowdham Mill, this week’s literary location.

Journalist John Brown was investigating the effects of factory life on its workers’ health when he met Robert Blincoe, and heard about the horrendous suffering he endured. Blincoe’s memories of child labour compelled Brown to record them, leading to the first English working-class biography. This account of brutality and poverty in the industrial revolution had a significant political impact inspiring Dickens and Trollope.

Brown captured the illiterate orphan Robert Blincoe’s story in detail but before its release Brown had taken his own life. His manuscript was retrieved from a pawnshop and acquired by Richard Carlisle, a radical campaigner and friend of the Nottingham bookseller Susannah Wright. Carlisle serialised Blincoe’s ordeal without his knowledge in The Lion, a two-penny paper, and in 1832 his words appeared in one volume by John Doherty as The Memoirs of Robert Blincoe. Doherty was a trade union leader come small publisher who hoped Blincoe’s memoirs would help his campaign for a shorter working week.

Abandoned at a St Pancras poorhouse, the orphan Blincoe was given hope of a new life when, in 1799, aged seven, he was told he’d be heading north to work in a cotton-mill. He and eighty others were expecting meals of roast beef and plum pudding, horse riding, decent pay and an education. Filled with pride and delusion the paupers were dressed in new clothes and sent north, cheering as they mounted their wagons for the bumpy four-day journey to Nottingham.

As they crossed Trent Bridge and approached the centre of town, the children marvelled at the scene: fields and meadows like a carpet of crocuses laid out beneath an elegant Georgian skyline of windmills and church spires. Blincoe and his fellow parish apprentices headed up to a large warehouse in St Mary’s churchyard. He recalled the pitying voices of local onlookers as the ‘live stock’ from London arrived. Their new bosses were the three Lambert brothers, cotton-spinners, hosiers and lacemen. The boys were to become stocking weavers, the girls lace-makers. The children rested up and even visited Nottingham castle before heading to Lowdham Mill. They arrived at their apprentice house, halfway between Lowdham and Gonalston, and were told they’d be remaining there for the next fourteen years, working an average of 15 hours a day, six days a week, with Sundays off for church.

The house was cramped, two to a bunk, with poor sanitation and revolting food, but it was nothing compared to life inside the mill. The children awoke at 5am to a loud bell and the governor’s ready whip. The cotton-mill met them with a nauseating smell of untreated cotton not helped by the oppressive heat. Blincoe’s first job was to pick loose cotton from spinning frames. He lost half his index finger to the machine but was forced to continue. These machines could be deadly. Blincoe witnessed a girl being dragged into one by her apron, her bones shattered and skull crushed.

If the children didn’t work quickly, they could expect to be beaten with a stick or hung up by their wrists. Desperate, Blincoe came close to throwing himself from the highest window, instead, he escaped, getting as far as Burton Joyce before being recognised and returned. The abuse was unrelenting but Blincoe was a fighter, determined to remain strong. He was the kind of kid to ask for more.

With England at war with France, many continental ports were closed to British exports. Together with failed harvests and a steep rise in taxes, this meant that the Lamberts needed to adapt and switch to steam, but they couldn’t afford the costs. In 1803 Lowdham Mill closed. The apprentice children were sold to the owners of Litton Mill in the Peak District. But if they had been expecting a better way of life they were mistaken. The hours, rations, beatings and injuries were even worse. The apprentices were expected to work here until they were twenty-one but many didn’t make it. The young dead were buried across several churchyards to hide the true extend of the horrors.

Blincoe survived to tell his tale and, as many academics have speculated, his memoirs inspired Charles Dickens to write Oliver Twist five years later. This idea is best presented by John Waller in The Real Oliver Twist, a history of the lives of workhouse children in the industrial revolution. Dickens had been a young reporter on The Mirror of Parliament when Blincoe’s memoir had been quoted there. Parliament was rife with debate about working hours and conditions and Blincoe’s testimony was of significant importance.

The opening chapters of Oliver Twist begin in a parish workhouse where the children are part raised and subjected to the brutality of its greedy officers. Twist, like Blincoe, narrowly avoids being sent to a master sweep. The offer for his ownership is £5, more than the one pound ten shillings paid for Blincoe by the Lamberts, in a host of similarities. For example, both Twist and Blincoe are given fictional names by their overseers (Blincoe was called Parson).

The Memoirs of Robert Blincoe didn’t just inspire Dickens, they also provided the basis of Frances Trollope’s controversial novel, The Life and Adventures of Michael Armstrong, the Factory Boy. Trollope had consulted with the campaigners of factory reform and met the publisher of Blincoe’s memoir, before describing the plight of the children of the cotton trade. A real fillip for those reformers, Trollope relayed passages of Blincoe’s struggle including the time he crept out under the cover of night to steal food from the well-fed pigs.

Oliver Twist and Michael Armstrong aren’t the only famous literary waifs to possess a Notts connection. There’s Tom, the illiterate chimney-sweep who earned money for his master to spend in The Water-Babies whose author Charles Kingsley moved here as a toddler when his father became vicar at North Clifton. Then there’s Peter Pan, said to be inspired by the sight of a ragged urchin wandering round Clifton Grove. “See that lad,” said J. M. Barrie to fellow writer George Basil Barham, “his name’s Peter and he has lost his shadow. His sister’s pinned that rag on him for a shadow.”

In more recent times, the late great Nottingham storyteller Pete Davis, a huge Dickens fan, recounted the life and trials of Robert Blincoe in a one man spoken show.