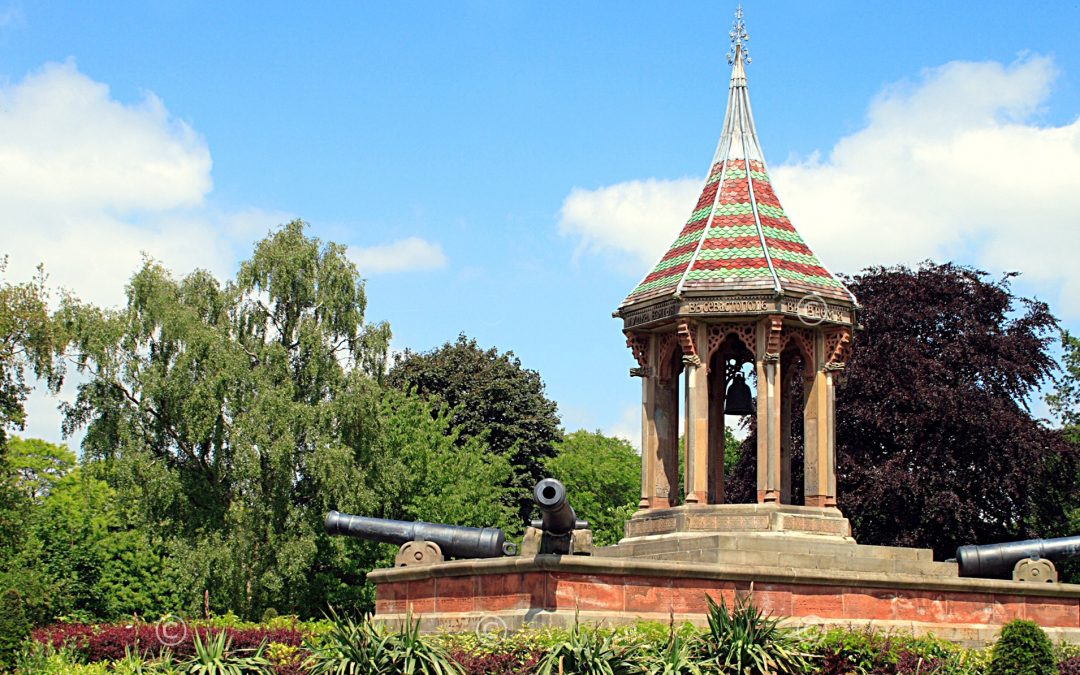 Designed by the botanical publisher Samuel Curtis, The Arboretum was created for the relaxation and education of our city dwellers, but the Arboretum doesn’t just cater for busy anthophiles, its twelve acres feature a host of hidden attractions: in addition to a small lake, an aviary, a cockatoo’s grave (the bird did live to be 114) and a bandstand, there are several areas of interest to bibliophiles. It’s even situated on the only Nottingham street named after a novel, Waverley Street (so named because of Walter Scott’s ‘Waverley’).

Michael Standen used his schooldays in Nottingham as inspiration for his successful debut novel, set here in the early 1960s. ‘Start Somewhere’, which follows a group of teenagers as they enter adulthood, opens with humorous high jinks in The Arboretum as we get to know eighteen-year-old Frank Griffin, his mates and his working-class family.

There’s a bust of Samuel Morley, by Joseph Else (he of the lions), that can be found at the Waverley Street entrance to The Arboretum. It describes Morley as a ‘MP, merchant and philanthropist’. Morley was a successful manufacturer who introduced pensions and allowances for his workforce. A political radical, abolitionist and campaigner, he donated money to Nottingham Castle, the University of Nottingham and Nottingham Trent University, and he refused a peerage from the Queen, not wanting to be seen as above the people.

Recognising the enormous social benefits of encouraging a love of reading at an early age, Samuel Morley was pivotal in the opening of the first children’s library which was in the Arboretum area of the city. Having found out that under 15s were not welcome in Nottingham’s Central Library (then on Shakespeare Street), Morley donated a £500 grant to help set up the children’s library in 1882. ‘The Children’s Free Public Lending Library and Reading Room’ was open after school hours on weekdays, allowing children over the age of 7 to borrow two books a week (at no cost) from a collection of over three thousand titles handpicked by Morley.

Aged twelve, Lawrence became the first boy from Eastwood to win a County Council scholarship to the High School situated just outside The Arboretum. At thirteen he began attending, taking his long commute from Eastwood and back. The Boys’ High School, as Lawrence later wrote, was ‘considered the best day school in England.’ He recalled the boys and girls from the local high schools mingling in the park.

In Lawrence’s ‘The Rainbow’, Ursula Brangwen mentions The Arboretum in this description of her school: ‘The school itself had been a gentleman’s house. Dark, sombre lawns separated it from the dark, select avenue. But its rooms were very large and of good appearance, and from the back, one looked over lawns and shrubbery, over the trees and the grassy slope of the Arboretum, to the town which heaped the hollow with its roofs and cupolas and its shadows.’

That school is now the Girls’ High School on the north side of the park.

Many of our finest writers attended the nearby Girls’ High School and would have been familiar with the park. These include the reviewer, journalist, columnist and author of fiction and non-fiction, Julie Myerson whose novel ‘Something Might Happen’ was long-listed for the Man Booker Prize; Stella Rimington who, after becoming the first woman to hold the post Director General of MI5, went on to write ten bestselling thrillers; Helen Cresswell, a BAFTA award-winning writer who combined comedy and mystery to capture young imaginations; the literary scholar Helen Cooper, University College Oxford’s first woman fellow and the author of ‘Oxford Guides to Chaucer: The Canterbury Tales’; and the novelist, journalist, reviewer and children’s writer, Janice Elliot, author of the award-winning bestseller ‘Secret Places’.

Greene was no stranger to The Arboretum and would walk his dog in the park when he lived just off Waverley Street. This was during the three months he worked as a sub editor on the Nottingham Journal. He used his experiences of living at Ivy House, paying 35 shillings a week to his landlady Mrs Loney, as inspiration for several novels. Loney, this “lazy woman who lived mostly in her basement from where she spied on her neighbours,” becomes Mrs Coney in ‘It’s a Battlefield’ and Mrs Prewitt – “a bitter woman who likes tinned salmon” – in ‘Brighton Rock’.

Greene was fascinated by what he called the “seedy” side of life and Nottingham gave him a first experience of this. It was also in Nottingham that he converted to Catholicism. This happened at St Barnabas Cathedral on Derby Road, and there will be a study day held there later this year on ‘Faith, Nottingham and Graham Greene’ during which Dr David Belbin, Michael Eaton (who went to school near The Arboretum) and Dr Creina Mansfield will look at Greene’s life, work and brief time in the city.

Two Russian canons captured in the Crimean War are placed with two replicas within an octagonal Chinese Bell Tower. This, and the lake, are said to have helped J M Barrie conjure up Neverland. Barrie’s first paid writing job was in Nottingham (on Pelham Street) and he would take regular walks through The Arboretum on his way to and from work.

To mark the fifth anniversary of Reykjavík becoming a UNESCO City of Literature there was an exhibition of words and images in which eighteen creative cities of literature took part. Nottingham’s contribution came from the poet John Lucas who shared the first verse of his poem ‘The Arboretum’, about the famed park.

the bandstand hints at crimson, spike of gold,

or rumours at inventive ear

of braying brass. But the one soldier’s old.

he doses on his bench seat near

the four Sebastapol cannon on which mould

On the south side of the park is the country’s only statue of Feargus O’Connor. A popular Irish Chartist leader, O’Connor had served as MP for Nottingham. As leader of the first national working-class political movement in Britain his statue was paid for by the workingmen of Nottingham without any contribution from the borough. There’s a 2008 book about him by Paul A Pickering.

Geoffrey Trease was born in Chaucer Street, close to The Arboretum, and educated at Nottingham High School where he was head boy. At one time, Trease had more books in print than any other British author. A pioneering children’s writer he also penned novels, autobiography, criticism and historical studies.

With an award-winning University nearby, and festivals and events held there throughout the year, The Arboretum continues to inspire.