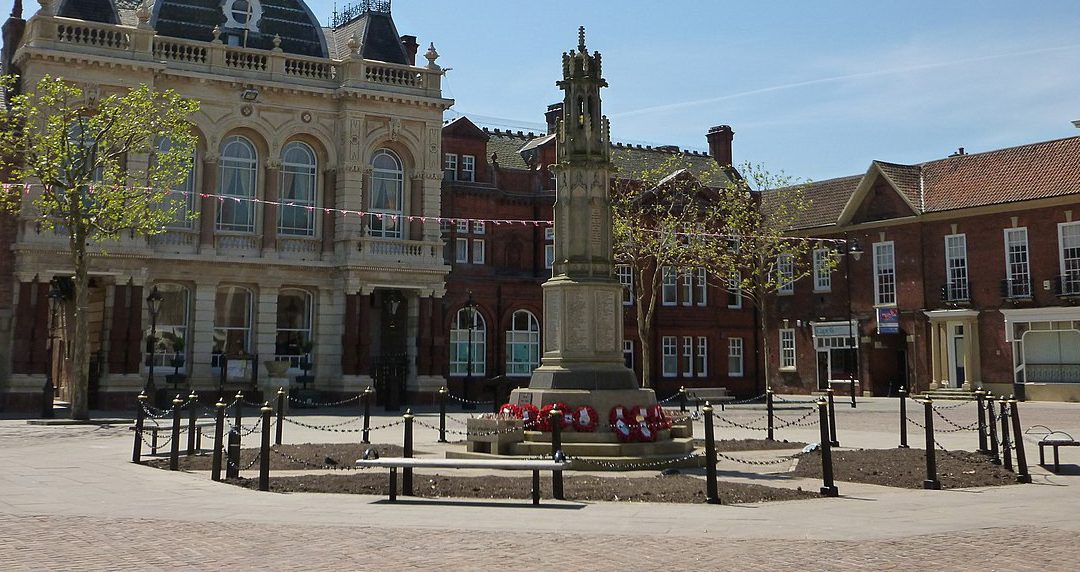 Retford Through Time by Nicola Davison Reed uncovers the secrets of the town’s earlier prosperity and reveals the faces of the residents that once filled the Georgian and Victorian frontages and former coach inns, all of which can be compared to the Retford of today. Retford is the photographer come author’s hometown.

Stephen Booth lives just outside Retford and for each of the past 18 years he has launched his latest crime novel in his local town. The release of the UK hardback and ebook of his new 2019 standalone Drowned Lives will be marked with a book signing event on August 15th at 11am in the Retford Library, in conjunction with Bookworm of Retford.

Booth is best known for his popular Cooper and Fry series set in the Peak District and more recently Notts.

Bookworm of Retford operated as a bookshop for 25 years but now offer a publishing and book delivery service. Working from home they continue to provide a bespoke ordering service. Bookworm’s publishing arm has been in existence for about eleven years and publishes all genres using all forms of publishing – traditional, assisted and self-publishing – depending on the nature of the books.

One of their titles is From Here We Changed The World by Adrian Gray, an important and enlightening read about the pilgrims and rebels from North Notts and West Lincs, including Thomas Helwys. Gray’s book features several pages about East and West Retford’s role in shaping Christian and world history. More can be discovered about the Mayflower Pilgrims in Retford at the Mayflower Pilgrim Visitor Centre inside the Retford Hub.

Max Blagg was born in Retford in 1948. The acclaimed poet, writer and performer is an established and respected figure on the New York literary scene, the city in which he’s lived since 1971. In the past few years Blagg has raised the dead in a series of interviews with famous deceased celebrities.

Here’s a link to Blagg reading Some of My Friends

Retford has a writers’ group, the imaginatively titled Retford Writers’ Group, and an authors’ group called, you guessed it, the Retford Authors’ Group. A collection of the group’s books can be found at The Glasshouse in Retford.

After writing non-fiction such as A Guide to Pre-Reformation Monastic Houses of Nottinghamshire Dr Robert Tansey wrote The Melton-Uppbury Village Mysteries series which includes The Monastic Hoard, The Twitchers Invasion and The Horse that Vanished at Christmas, all written under the name Sebastian Blanchard.

The former English and drama teacher Barry Upton has written a number of technical productions on the Arts and Technology as well as plays and musicals. His novels include Going Home, a story in which the past and present merge, and The Academy. Upton has also written three classroom plays based on the Stories of The Brothers Grimm.

John Holmes co-authored of the non-fiction book When The War Is Over on Dunkirk and the German P.O.W. camps in World War Two. He’s also written a book of short stories We Never Just Talk, had various poems published, and has also written novels including Legacy And A Gun published in May 2019 about an exiled politician who struggles to overcome violence and his own ambition.

Graeme Cumming’s first novel Ravens Gathering was published in 2012. It’s a blend of horror and fantasy. Cumming’s stories don’t always fall into a specific genre, but are always written as thrillers.

Former language teacher Lesley Keating – writing as Joyce Lesley Keating – now writes fantasy or science fiction for young adults and upwards. Her first book Oath of the Dove combines Roman style military and the slow discovery of heritage. The Christmas of the Storyman is a mystery set amid the fun and feasting of a medieval Christmas.

Retford, for readers, for writers, for rebels.