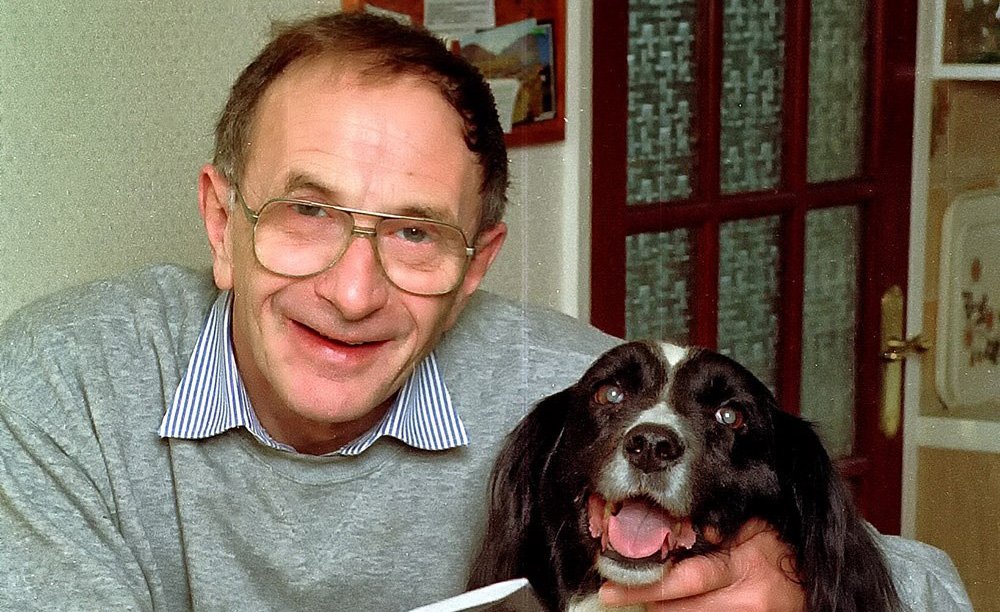 From Dickens, Twain, Hemingway, Wodehouse and Orwell, to Ken Follett and Will Self, many journalists have become renowned authors, and Notts has more than its share. Robert Harris, Stephen Booth, Mhari Macfarlane, T. M. Logan, Cecil Roberts, Graham Greene and J M Barrie are all amongst the journo-come-authors with connections to our county. As is Frank Palmer, the subject of this week’s literary location; a man who scooped a British Press award for breaking a sensational case, and even shaped British politics, before turning to detective fiction.

At Keyworth Cricket Club, on the opposite side to the pavilion, is a memorial bench bearing the greeting ‘Ey up sunshine’. It was unveiled by the Nottingham branch of the National Union of Journalists and is dedicated to the late Frank Palmer.

Before settling in Keyworth and writing crime novels, Frank had been an acclaimed journalist; a dogged old-school reporter, exposing corruption and hypocrisy. After National Service, during which he worked in Paris as a military shorthand writer, Frank set up and ran Eastern News Service in the front room of his mother’s Lincolnshire home. His newspaper career began in the 1950s with the Lincoln Chronicle and Lincolnshire Echo.

Moving to Manchester he joined the Daily Express and was the first journalist to interview Matt Busby after the Munich Air disaster. For this story he achieved the rare feat of writing the front and back page leads for the Daily Express on the same day.

He then joined the Daily Mirror, becoming their man in the East Midlands for more than 20 years, during which time he helped many a young journalist. One such beneficiary was Alastair Campbell (yes that one), who recalls: “[Frank] taught young journalists like me everything about good, old-fashioned journalism.”

In 1978 Frank was named a Reporter of the Year at the British Press Awards for his scoop on the year’s most sensational trial, which came to be known as the sex-in-chains case. Frank broke the story of Joyce McKinney who had kidnapped a Mormon missionary with whom she was obsessed. McKinney had come to Britain in pursuit of the man and ended up kidnapping him and chaining him to a bed. She later jumped bail and fled to the US, dressed as a nun.

“Frank was a really fine, good, old-fashioned reporter,” said Richard Stott, former Daily Mirror editor. “He was the one who would always walk that extra mile to answer that one question which needed to be asked…who would make that extra phone call and knock on just one more door.”

Bob Turner, former News Editor of the Nottingham Evening Post, said of Frank that “He was loyal to his profession, loyal to the Mirror and loyal to his colleagues. He was a remarkable man.”

Dedicated to the Mirror he might have been but Frank became disillusioned during the paper’s Maxwell era and, in 1991, he took early retirement to write a detective novel that had been in his head for years. That novel Testimony was published in 1993. It was the first of eight books in the Detective Inspector ‘Jacko’ Jackson series. Frank’s son Nick told me “Dad and indeed all of us were so chuffed when he got it published, after trying very hard for a number of years.”

An admirer of Raymond Chandler, John le Carré, Ian Rankin and Val McDermid, Frank was a master at keeping the reader guessing, something he continued to achieve with his second series, set in Nottingham. Frank’s nine Phil ‘Sweeney’ Todd books featured a Nottingham cop of humour and humanity introduced in 1996’s Dark Forest. By the time of his last book, Todd’s Law, Frank was one of Nottingham most popular authors if library withdrawals are anything to go by.

Local photographer Robert Rathbone worked on Frank’s dust jackets and publicity photos. A good friend of Frank’s, Robert describes him as a “wonderful, bubbly character who was fabulous company.” He adds: “We used to meet other journalists in the Blue Bell pub on a Friday evening to catch up on the latest gossip. Frank would hold court while he collected all the stories. At lot of his ideas [for his crime novels] came from stories we had worked on. He used bits and bobs that we had witnessed, blending them together to make his stories. He also based a lot of his characters around his friends and acquaintances. We went to various events so Frank could take in the atmosphere including a return to Old Trafford for a night match which brought back memories of his coverage of the Munich Air Disaster.”

It was the village of Keyworth that Frank made his home and it’s been said that his hospitality there was legendary. Amongst Frank’s loves were football, classical music, and even The Peacock pub on Mansfield Road, but cricket had a special place in his heart. A big follower of Notts CCC he was also vice-president of Keyworth Cricket Club.

Frank died at the QMC, aged 66, following a heart attack after having an operation on a burst appendix.

Funny and warm, Frank Palmer was a true character, and wouldn’t have looked out of place in one of his books.