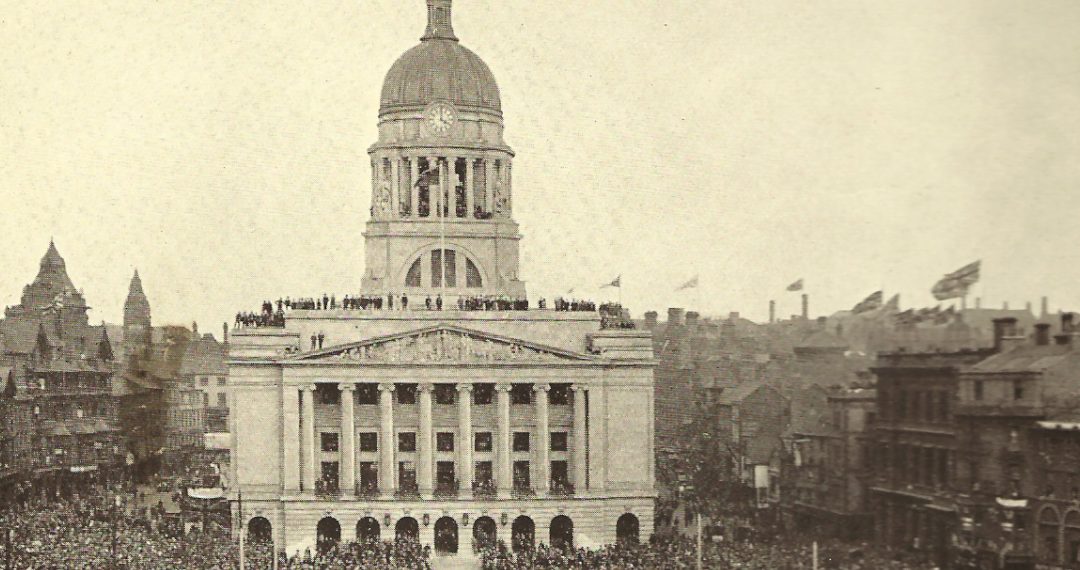 When Ken Dodd first came to Nottingham he took a taxi from Midland Station to the Empire Theatre for what was to be his first professional show. As the taxi passed our grand Council House with its big dome, Dodd asked the driver what it was.

Dodd replied, “Oh, I’ll put my name down for one of those.”

Ken Dodd isn’t the only celebrity to be impressed by our Council House, perhaps the finest municipal building outside London, and this week marks its 90th Birthday. It was on May 22nd 1929 that our Council House was officially opened by the Prince of Wales. 70 years ago, Elizabeth and the Duke of Edinburgh made their first official visit to Nottingham during which they appeared on the Council House’s famous balcony, something Elizabeth’s last did in 2012, when the Duke and Duchess of Cambridge joined the Queen in waving to the masses that had gathered in the Old Market Square (which also got its name in 1929 having previously been known as the Great Market Place).

Back in 1945 – the year the United Nations came into existence – General Dwight D Eisenhower pledged friendship between the United States and Great Britain here, addressing the thousands in attendance in the Market Square.

The Council House is as imposing a building as any in the city. Built from Portland stone, from the same quarry used to build St. Paul’s, its iconic 61m-high dome rises above the city, and its deep-toned hourly bell, nicknamed ‘Little John’, can be heard seven miles away. The keystone of the central arch was salvaged from a London church after the Great Fire of 1666, and it’s said that the two lifts were from a set of four, the other two being inside the Empire State Building.

And what of the venue’s literary links? Here are the highlights:

In 1960, the Council House appeared in the film Saturday Night and Sunday Morning.

In 1965, the author Cecil Roberts was delighted to be named a Freeman of Nottingham, receiving his honour here. As a fifteen-year-old, Roberts had worked beneath the Council House as a clerk in the Market and Fairs Department.

In 2008, Alan Sillitoe became an Honorary Freeman of the City of Nottingham, saying “It really is an honour. It’s something I never thought I’d get. I’m staggered.”

In 2010, there was a celebration of Alan Sillitoe’s life and works.

In 2014, Nottingham officially launched its bid to become a UNESCO City of Literature at an event hosted by the Lord Mayor at the Council House.

In 2018, Catharine Arnold became the Sheriff of Nottingham, based at the Council House. She is the author of popular history books, including Necropolis London and its Dead, Globe, the World of Shakespeare’s London, Edward VII The Prince of Wales and the Women He Loved and Pandemic 1918.

There was also a chance for delegates from around the globe to share ideas and forge partnerships. The highlight of the event was the lecture from the internationally acclaimed author Robert Macfarlane, movingly introduced with a video highlighting the impact of the Lost Words project that was inspired by his book. Macfarlane is renowned for his writing on landscape, memory, place and nature, and his talk was a vivid demonstration of the power of storytelling and how culture and creativity can help a world in deep trouble. With mutualism and interconnectedness as relevant now as ever before, Macfarlane proved the perfect speaker for a talk in front of the creative cities. With a packed audience holding onto every word, many would have been inspired to use words to build a better world.