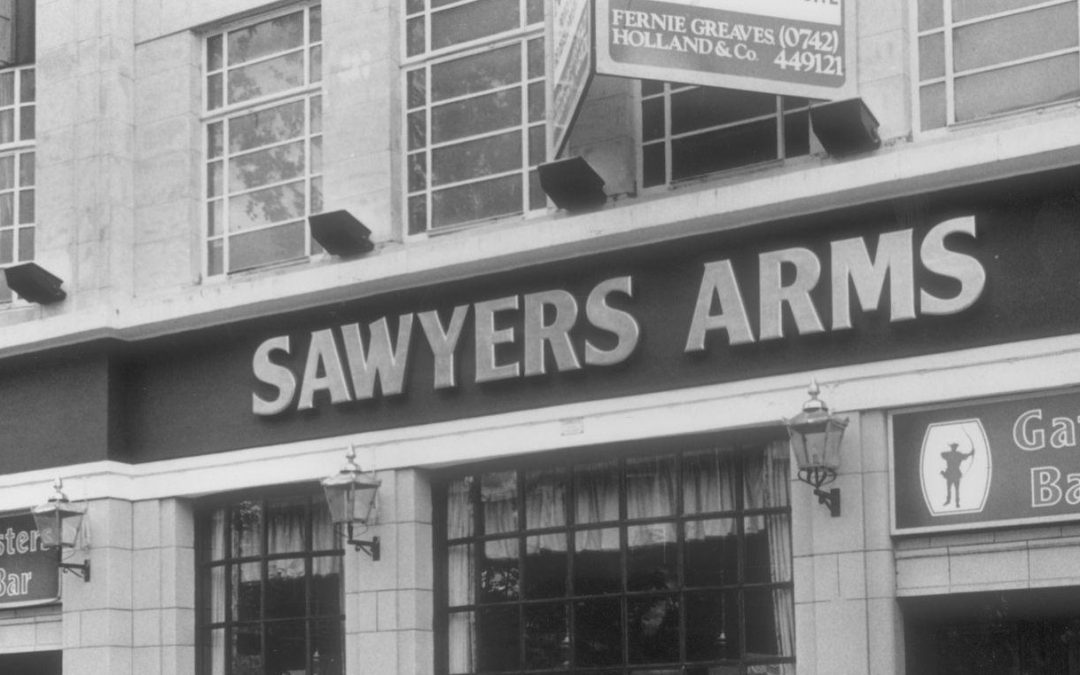 For nearly thirty years the rebellious outcast Sophie Curly could be found in Nottingham’s city centre pubs. You might remember her, a bag lady with a smiley face furnished with bright pink lipstick and a milky eye, ranting about Thatcher and preaching free love.

Fond of our unjudgmental drunks, and not liking rich people, Sophie frequented our rougher establishments but she’d pop up in a variety of boozers, Yates’s, The Bell, The Cricketers, and The Poachers (where her wake was held). She was quite a sight; her margarine-washed hair dyed in turmeric rice and curled with a pipe cleaner, her attire a mix of lace, cardboard, fishnet stockings and a large Rasta hat.

All this was before the Cloughie statue and speakers’ corner. Sophie’s soapbox was a barstool or bench, from which she was primed to offer her thoughts, attacking capitalism, attacking consumerism, attacking the Tories. In Thatcher’s government she saw corruption and a refusal to look after the old and poor. When canvassing for the Labour Party she insisted that a campaign poster was put up at her care home. After the manager denied her the wall-space she transferred to another home. This wasn’t a novel experience for Sophie who was used to being bounced from home to home like Kirsty Allsop. One time she was packed off for propositioning male residents in their lift, another time a petition had been collected to have her evicted, and then there were those occasions in which she would evict herself because the home wasn’t run by the council.

Before the council found her, Sophie had been homeless, sleeping where she could, an abandoned car, a park bench. Between the streets and care homes, Sophie slept in a series of council flats, all her belongings in the one room; the windows all covered in a web of string to catch burglars, with talcum powder on the sills to snag their prints. Paranoia was her shadow, she’d tell anyone who’d listen about child killers, evil scientists and others out to get her. Some refuge was found in the catholic church but she was not accepted there, her views on adultery being a God-given right didn’t wash with the local priest.

Her poor physical health (including bowel cancer) and continual mental health problems (including the hearing of voices) resulted in spells in hospital. For the rest of her time in Nottingham it was the pubs in which she’d spend her time and pension, socialising in different accents, from posh Londoner to Nottingham local, as the situation required.

Don’t cast me down

And let me drown

But love and bless

And give me company;

And let me always be

There were other pastimes she partook in throughout her time in the city. She remained a reader, ordering books from the library, and a writer: in one letter she wrote, ‘Bring me a pen if you like because one can’t have too many and in this flat petty pilfering goes on all the time.’ In another letter she wrote that she was saving up to live in the USSR, and that, in the event of her death, her ‘remains should be sent to the Kremlin. PLEASE.’ Some of her letters were written with her right/wrong hand to keep both sides of her brain exercised.

Sophie had always been a writer.

She had been born Joan Easdale and grown up in Kent. Like her brother Brian she was a precocious talent. They would put on shows and concerts for the family. Whilst Brian went on to win an Oscar for writing the score to The Red Shoes, Joan focused on her poetry and at the age of fifteen sent poems to Virginia Woolf, who declared her “my discovery” and later published her works in two volumes; A Collection of Poems being described by the critics as “astonishingly adroit, acute, accomplished.”

Joan regularly visited Woolf and also became close friends with the likeminded writer, socialist and free-love proponent Naomi Mitchison. In no time Joan was accepted into the London literary and intellectual elite of the 1930s, The Bloomsbury Group. The attractive, glossy-haired Joan fell in love with Jim Rendel, a man of science, and they became married with three children.

Combining writing with home life Joan wrote plays and talks for the BBC but work and family demands were proving difficult to juggle. No longer did she have time for her poetry. Then came the war. Under the constant fear of being blown up during the blitz Joan’s life became unmanageable. Psychiatric advice was sought to help save her struggling marriage. Her analyst told her to give up writing and focus on being the good wife and mother. She took the advice, burning everything she’d ever written on a big bonfire. In a last attempt to save her marriage she agreed to move the family to Australia after her husband has taken a job there.

It was in Sydney that she had a full-blown breakdown, becoming convinced that there were spies in the roof. It was decided that she should return to England to recover, and head back to Australia upon feeling better. She never did. Saying goodbye to her children Jane (then aged 13), Polly (10) and Sandy (6) hardly helped her mental state and she entered Holloway Sanitorium where she was subjected to ECT and experimental drugs. Diagnosed schizophrenic she later felt well enough to discharge herself and caught a train up north. She got off at a random city, Nottingham, and reinvented herself, choosing the name Sophie Curly.

Sophie enjoyed the company of most Nottingham people, finding them friendly. Nottingham allowed her to become her own person and she even reconnected with family members, some of whom would come up to visit her here. One such visitor was Sophie’s granddaughter Celia Robertson, who has written a book about her, Who Was Sophie? The lives of my grandmother, poet and stranger. Robertson’s book includes Amber Innocent, Sophie’s 1939 poem, first published by The Hogarth Press, and a collection of great family photographs, some from Sophie’s time in Nottingham.