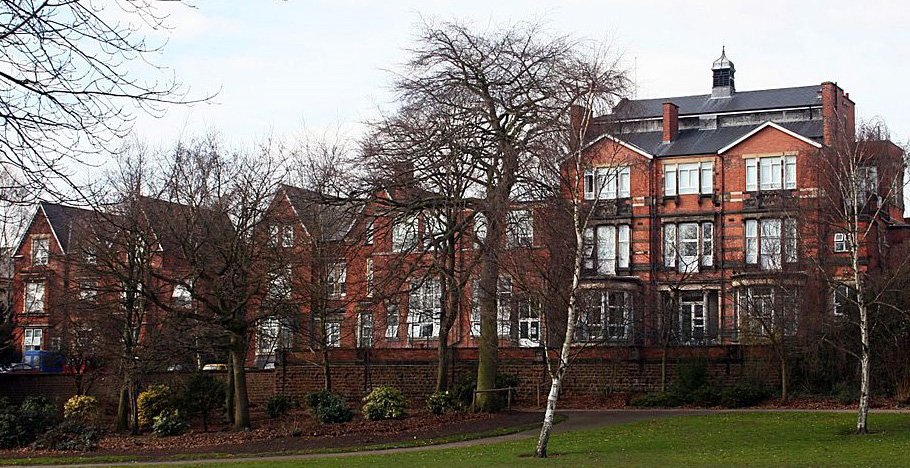 Nottingham Girls’ High School has had quite an impact on our contribution to literature, and it’s this week’s literary location.

Nottingham Girls’ High School was originally on Oxford Street before relocating to a former lace manufacturer’s house on Arboretum Street where it expanded into a neighbouring house. During the Second World War the school moved to Bestwood and Daybrook but, as the war ended, they moved back to their current home. Among the alumnae are many published writers. Here’s a few of them:

Reviewer, journalist, columnist and author of fiction and non-fiction, Julie Myerson was born in Sherwood in 1960. She grew up in several locations within the city and county and in her book Home (2004) the author recalls almost every Nottingham house she’d ever lived in. After attending the high school she read English at Bristol University and, in addition to her writing, has worked for the National Theatre. Myerson’s novel Something Might Happen (2003) was long-listed for the Man Booker Prize.

Stella Rimington joined Britain’s Security Service in 1969. In 1992 she was appointed Director General of MI5 becoming the first woman to hold the post, and the first Director General to have her name publicly announced on appointment. Following her retirement in 1996, Rimington released her autobiography Open Secret, and has since published ten bestselling thrillers featuring MI5 officer Liz Carlyle.

Helen Cresswell (1934 – 2005) loved creating stories for children. And in a 45-year career, the BAFTA award winner penned well over 100 of them. Combining comedy and mystery, she created the character Lizzie Dripping, who also appeared in her adapted hit BBC TV drama of the same name. Cresswell devised several series for TV and also wrote for productions of The Secret World of Polly Flint, Five Children and It and The Famous Five. Her best-known book is Moondail (1987) – also a BBC TV series – but the menacing and often overlooked The Winter of the Birds (1976) is said to have been her favourite. Cresswell was a member of Nottingham Writers’ Club.

The literary scholar Helen Cooper was born in Nottingham in 1947. In 1978 she moved to University College, Oxford, becoming first woman fellow in its history, and teaching medieval and early modern literature. Later, she became a Professor of Medieval and Renaissance English at the University of Cambridge, and a fellow of Magdalene College, Cambridge. Cooper’s research interests include Anglo-Norman and Middle English romance, Chaucer and Shakespeare. Her many published books include Oxford Guides to Chaucer: The Canterbury Tales (1996) and Shakespeare and the Medieval World (2010)

The novelist, journalist, reviewer and children’s writer, Janice Elliot, was brought up in wartime Nottingham. This period of her life provided the setting for her award-winning bestseller Secret Places (1981) which featured a girls’ boarding school during the war. Secret Places also became a prize-winning film in 1984. Elliott had left a career in journalism (Sunday Times) for full-time writing in 1962. She has written more than twenty novels, five children’s books and a collection of stories.

In D.H. Lawrence’s The Rainbow (1915), the character Ursula Brangwen attends Nottingham ‘Grammar School’ which is the Nottingham Girls’ High School.

‘One went away to the Grammar School, and left the little school, the meagre teachers, the Philipses whom she had tried to love but who had made her fail, and whom she could not forgive.’ (from The Rainbow)

Of the school Ursula commented:

‘The school itself had been a gentleman’s house. Dark, sombre lawns separated it from the dark, select avenue. But its rooms were very large and of good appearance, and from the back, one looked over lawns and shrubbery, over the trees and the grassy slope of the Arboretum, to the town which heaped the hollow with its roofs and cupolas and its shadows.’ (from The Rainbow)