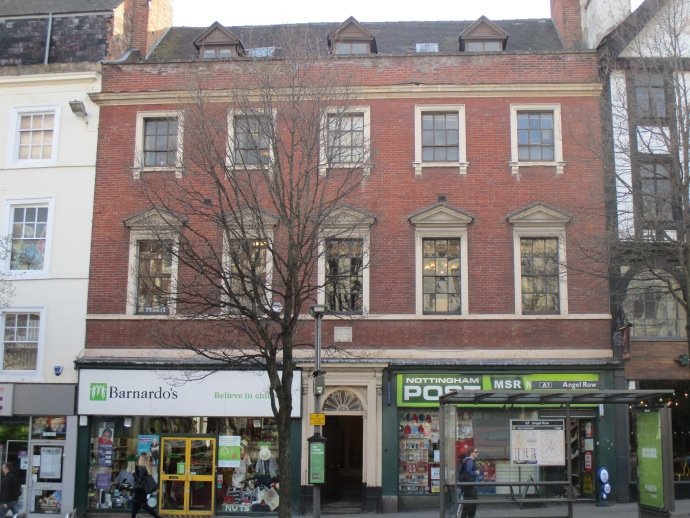 It’s a big year for Bromley House Library with over half a million pounds being spent on roof and structural repair. Currently on a Heritage At Risk register, the library received a grant of £385,000 from Historic England towards the cost of repairing the 267-year-old roof and ending a list of problems which include drains being blocked by dead pigeons.

It was in 1816 that Nottingham’s oldest subscription library was founded. Bromley House itself had been built as a town house in 1752, for the Nottingham banker George Smith, grandson of the founder of the oldest known provincial bank in the country. Smith picked the name Bromley House after his son changed his name to Bromley.

The visitors’ book is a record of Nottingham’s intellectual heritage with past members like George Green, a father of quantum physics, included along with notable guests such as the scientist Michael Faraday. Formally capped at 265 members, the library had required each member to purchase a share. The last cap was removed in 1998 when charitable status was obtained and there are now over 1700 members with more being welcomed. Former regulars include members of the Notts literati: William and Mary Howitt, Rose Fyleman, Philip James Bailey and Robert Mellors *. As a boy Cecil Roberts visited the library and “…went out, dazed, making a vow that one day, in the affluent future I planned, I would belong to it.” Ironically, Roberts never did join but does have a room named after him in the nearby Central Library.

The spiral staircase was added in 1857. It was crafted by William Stevenson, Nottingham’s master-carpenter and cabinet maker, and the writer of Bygone Nottinghamshire.

At the rear of the library is a hidden Victorian garden, a haven in the heart of the city.

See more from inside Bromley House

The library features a working meridian line. A small hole in the upper left of a window sends a beam of light along the brass strip on the floor at precisely true solar noon. It was used to set the clocks of Nottingham in days before standard time. There’s also a 1830 longcase clock inscribed with the time differences across the country – Nottingham time was 4 minutes 33 seconds behind Greenwich.

On the top floor is a studio that operated as the first photographic studio in Nottingham and one of the first commercial photographic studios in the country, a venue where many of Nottingham’s wealthier families of the mid-19th century had their look captured. Nottingham’s first professional photographer, Alfred Barber, put in a skylight at his own expense, a circular and glass structure incorporating a cog wheel mechanism that could follow the passage of the sun.

Bromley House hosts lots of groups and events. Here’s a glance at some of their upcoming activities.

A members’ reading group is being set up on the subject of travel writing. This is in collaboration with Nottingham Trent University’s Centre for Travel Writing Studies. More info here

There’s also a programme of talks.

Highlights include The English Cooee, a talk by Richard White that looks at how an indigenous Australian bush call – first recorded by Europeans in 1788 – found a place in works of English literature, including the work of D H Lawrence, Arthur Conan Doyle, Agatha Christie, John Betjeman, D J Enright, Douglas Adams and Terry Pratchett.

Learn about the history of the Deaf community in Nottingham with a talk from Mo Cooper.

All the talks can be found here